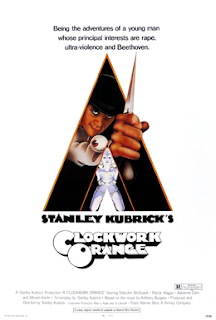 For decades, A Clockwork Orange was unseen in Britain. After a number of copycat crimes led to a backlash, Kubrick – who had complete control over the rights of the film in the UK, his adopted country – essentially refused to let the film be shown anywhere in the country during his lifetime. This gave Clockwork Orange a sort of mystique for UK audiences that it has only slowly worn off, the air of the banned product, impossible to see other than through a dodgy knock-off or by travelling to another country. Released from the vaults this century, the film still carries a chilling pull, even if it’s a compelling but still muddled piece of intellectualism.

Adapted faithfully from Anthony Burgess’ novel, the film follows the life of violent young man Alex DeLarge (Malcolm McDowell), leader of a gang of street thugs who delight in evenings of “ultra violence”, with a bit of “the old in-out” thrown in for good measure. Which, in the invented Ingsoc style dialogue Burgess came up with, basically means Alex is essentially a psychotic rapist, albeit one with a huge degree of anti-authoritarian charm and cheek. Alex’s crimes eventually catch up with him however, whereupon he is imprisoned and volunteers for what he assumes is an easy option: an experimental psychiatric aversion treatment, designed to make him incapable of taking parts in acts of violence and sex. Released back into the world, Alex finds it and himself unchanged – the only difference being that violence makes him feel sick, which is poor defence as he encounters all his victims yet again, all bent on revenge.

Did something about the film scare Kubrick? Was part of his later mixed feelings about the film based around the fact the film is seduced by Alex, that it indulges his awfulness and utter lack of morality and makes points comparing the authoritarian government with the murderer they are trying to deal with. Yes, Kubrick makes clear that Alex feels nothing but pleasure about his awful acts, and the distorted fish-eyed lens he uses to capture much of this really hammers home the awfulness of his actions. But it’s also a film that takes a giddy delight in Alex’s charm and larger-than-life persona, and makes it easier for us to find him an attractive figure.

Of course part of this is through the way Kubrick seizes upon a once-in-a-lifetime performance from Malcolm McDowell, who roars through the film with such giddy power, such perverse force of nature electricity that he never captured it again. McDowell’s impish delight is what powers the film, and Kubrick’s clear admiration for the actor’s improvisation, his pushing of boundaries (the film’s most famous sequence, Alex singing Singin’ in the Rain while assaulting and – off camera – raping a woman, was McDowell’s own improvisation). McDowell’s performance is a magnet, his sneering contempt for authority and his sexy confidence and cultured intelligence makes Alex a character far more attractive than he should be. 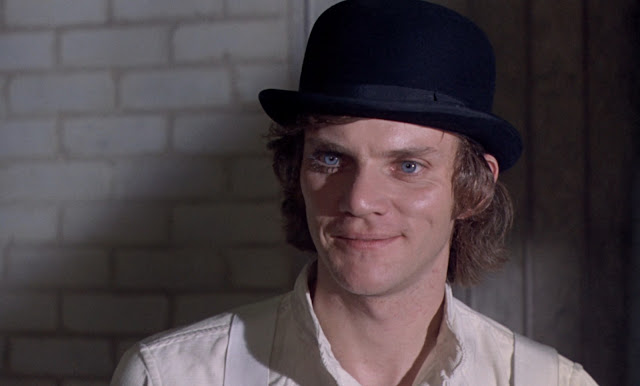 And quite possibly to Kubrick as well. The film’s moral force loses some of its direction from the novel, by its skill in presenting in such a bravura way Alex’s horrors and because McDowell charges through the film. Kubrick was always the ultimate technician of film, so it’s not a surprise that A Clockwork Orange is a triumph of style and design; perhaps that is at the heart of its enduring power and impact. Kubrick’s design pushes the film a few degrees into the future from 1971, with a grimy, rundown look at Britain mixed with primary colours and garish 70s design. The look of Alex and Droogs is inspired, the sort of cos-play triumph that was way ahead of its time.

The film wants to make points about morality and free will, but these ideas get lost in the mastery of the film-making and the technical triumph of Kubrick (and John Alcott’s) camerawork. The film makes extensive use of fish-eyed, wide angle lenses that distort the world around Alex, hammering home the ultra-realism of the film. At several points Kubrick uses slow pan outs that go from tight shots to reveal more and more of the world of the film, granting an epic status to this squalid world (and increasing the status of Alex all the more). It’s sublimely made, but this is part of the problem.

The main problem is that Kubrick as a director is all technocrat genius, and no heart at all. He loses himself in what he can do, and forgets what he should do. It’s a film where it’s easy to sympathise with the anti-hero, as no voice is really given to the victims. Kubrick seems able to overlook the horror of the events, in his admiration for the actor and the technique. It muddies as well the questions of morality around the mind-altering control of the state – and these ideas are less thought-provoking than Kubrick might have thought anyway. It wants us to ask if a repressive state that prevents someone from committing violent acts – but does nothing to change their basic personality or desire to change, only forces them to do so – can really take the moral high ground? The film argues not – and the Kubrick’s general misanthropy is focused as much on how violence from one naturally begets violence in others – but this is pretty basic stuff.

Perhaps if Kubrick had invested more time in the reality of moments, to off-set the ultra-realism of Alex’s violence and the epic grandeur of McDowell, the film might have been able to explore this further. We see all of Alex’s victims respond with anger and fury and violence when given their chance for revenge in the second half of the film, but we don’t get a sense of the internal journey that takes them there. What we get is the look of horror (and later the near panicked reaction when he realises he has given shelter to his wife’s rapist) from Patrick Magee’s Mr Alexander, but that’s it. Otherwise, the focus places the victims on the outside of the drama and zooms in on the perpetrator and the government trying to control him.

It makes for a misbalanced film, which fails to make the points you wish it could make. Kubrick’s film is an electric piece of filmmaking, dynamic and skilled behind the camera, but the film lacks the heart it needs to counterbalance its coldness and slightly smug satire. It grips and envelops you when watching it – not least due to McDowell’s genius in the lead role – but it’s not a film that works as well as it should. You admire it and then realise its lack of soul.
Email ThisBlogThis!Share to TwitterShare to FacebookShare to Pinterest
Labels: Adrienne Corri, Literary adaptations, Malcolm McDowell, Michael Bates, Patrick Magee, Philip Stone, Social issues, Stanley Kubrick, Warren Clarke