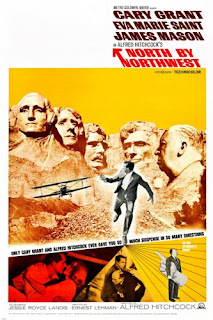 What is it about? Ernest Lehman went in wanting to write the “ultimate Hitchcock film”. And I think you can say he pulled it off. North by Northwest is the perhaps the most electric, fun, dynamic and nonsensical of all Hitchcock’s action-adventures, a neat bookend with The 39 Steps for Hitchcock’s career. It’s such good fun you scarcely notice the plot makes very little sense and the film is barely about anything at all other than a man getting chased. It has the most Macguffiniest MacGuffin in the whole Hitchcock career, an item of such little interest to the viewer that it never appears on screen and is only cursorily discussed.

Cary Grant is Roger Thornhill, nifty Mad Man-esque ad executive (you can imagine that Don Draper dreamed of being Roger Thornhill) who accidentally gets mistaken by shady goons for the mysterious “Mr Kaplan”, actually a non-person used as a distraction by the FBI. Cue Thornhill’s kidnapping, interrogation by the goon’s suave leader (James Mason, never more James Mason than here), escaping a murder attempt, getting embroiled in the murder of a UN official and fleeing New York in the train compartment of smart and sexy Eve Kendall (Eva Maria Saint). And that’s before we even mention killer crop dusting planes, faked shootings, auction house shenanigans and a vertigo inducing game of cat-and-mouse on Mount Rushmore. Is there a more fun film in the world?

North by Northwest gained its Hamlet inspired title (“I am but mad north-north-west. When the wind is southerly, I know a hawk from a hawksaw”) and it’s pretty meaningless – Lehman basically liked it and throws in a fictional “Northwest airline” so Thornhill can fly ‘North’ at one point (geddit?!) – but it also captures a sense of manic powerlessness in the film. Thornhill spends a good slice of the film telling anyone who will listen he is not Kaplan, while every action he carries out seems to serve only to convince his pursuers he definitely is. The film’s echo of madness in its title carries across to the frantic energy of the film, and Thornhill’s belief that he must surely be the only sane man in a world of lunatic chaos.

And it’s prime Hitchcock chaos here in his most engaging, fast-paced and funny action adventure. The sort of prime piece of entertainment assembled with such skill, energy and excellence it looks really easy (but of course isn’t). Hitchcock keeps the momentum of this crazed chase perfectly pitched, and stages each of the set pieces so well that all of them have become icons of adventure cinema. Who can look at a crop dusting plane without thinking of Thornhill running in desperation, in the middle of nowhere, from a lethal plan swooping down on him from above? Who can look at Mount Rushmore without imagining Grant and Saint climbing all over it with Landau in pursuit? 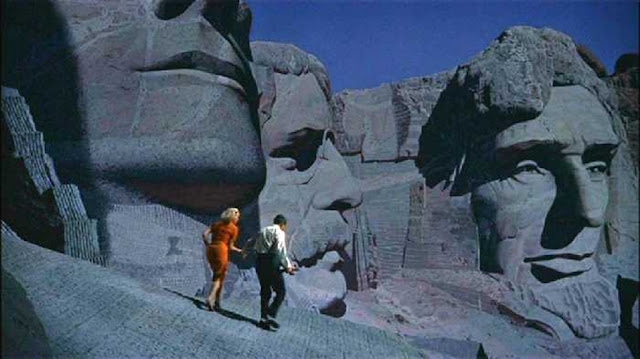 It’s Grant as well that really makes the film work. He’s such an accomplished screen presence, so smooth and practised, it’s very easy to see this as a film where he is barely acting. But that would be to do him a major disservice. Not only is such a balance of light comedy and action so hard to pull off (so much so that Harrison Ford as Indy is possibly the only one who can get close – and that character is chalk and cheese with Thornhill) – but Grant builds a character who develops perceptively and clearly over the course of the film.

Initially the typical Grantish stereotype – so suave, confident and shallow that even his middle initial “O” literally stands, Harry Truman like, for nothing – Thornhill begins as a man who blithely assumes he can drift through his life and getting anything without question. Events – and his embroilment in them – however see him develop from a deeply selfish and lazy man into one who carries moral force, loyalty, determination and dedication to duty and an increasing sense of confidence and derring-do. From the man who is the victim of circumstance at the start of the film, failing to get anyone to believe him, he becomes a man who saves himself and everyone else with his pluck, daring and resourcefulness. And he does it all while never losing his light, almost put-upon, wit and playfulness. It’s a truly great personality performance with real depth and development: a hollow man who becomes a real man of standing and purpose. 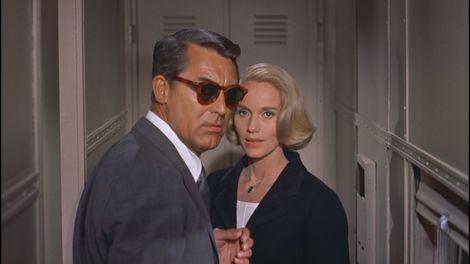 He’s backed superbly by the cast who seize their roles with gusto. James Mason drips British superiority and suaveness (has there ever been two such cool actors facing off?) as VanDamme, Eva Marie Saint is every ounce the brave, resourceful, daring and clever lady that prompts Thornhill to man-up. Jessie Royce Landis gets some lovely comic mileage from Thornhill’s pecking-hen mother (hilariously she’s only 8 years older than Cary Grant). Martin Landau simpers rather effectively as VanDamme’s fey sidekick.

The script is crammed with great lines from Lehman, all of which delivered superbly by the cast. But it’s a director’s treat, and Hitchcock delivers it brilliantly. I’ve mentioned that MacGuffin – it’s some microfilm or something in a statue that’s the root of the all the problems – but it hardly matters. The film powers forward with the dynamic energy of a comic farce crossed with action adventure. Thornhill’s initials spell out “ROT” and in an affectionate thing that’s what the film is – something that doesn’t take it self seriously but sets out to entertain at all costs.

So we get Hitchcock splicing in rom-com flirtations between Grant and Saint (and no less than two shots of trains speeding down lines and into tunnels, just to hammer home exactly what they are doing to kill time on the ‘sleeper’ train) with edge-of-the-seat sequences (the slow tension build at an abandoned bus station while Grant waits for “Kaplan” only to fall victim to assault from crop duster) then segues back into comedy (the hilarious “pretend to be drunk” to escape assassination at an auction) it’s perfectly assembled. And that end sequence at Mount Rushmore – a near perfect mix of comedy, action, adventure, suspense, thriller and romance. It’s flawless.

William Goldman famously stated North by Northwest had the finest, most economical ending of all time – and it ties up perfectly and beautifully about six plot threads and cliffhangers in less than 70 seconds – but the entire film is a perfect package. Hitchcock’s glossiest chase adventure is wonderfully directed and in Cary Grant it perfectly married up possibly the only actor in the history of film with both the charisma and the acting chops to play the part with one of the greatest entertainments in the history of film. It’s mad, meaningless nonsesense – but who cares, it’s a great, great, great film.
Email ThisBlogThis!Share to TwitterShare to FacebookShare to Pinterest
Labels: Action Films, Adventure films, Alfred Hitchcock, Cary Grant, Eva Marie Saint, James Mason, Jessie Royce Landis, Leo G Carroll, Martin Landau, Spy thrillers