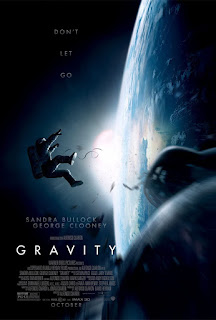 It’s often been said space is mankind’s final frontier. It’s beautiful and awe-inspiring. But it’s also a terrible place, a void where the normal rules that dictate how our bodies operate are completely suspended. We can only breathe what we carry with us and the lack of any atmosphere or gravity means a few metres might as well be a million miles. It’s in many ways the perfect conditions for a survival film – which, at its heart, is what Gravity is.

On a mission in space to repair the Hubble telescope, a collapsed satellite triggers a chain reaction of space debris hurtling in orbit at extreme velocities. Turned into a vast number of deadly bullets flying completing an orbit once every 90 minutes. This shrapnel destroys the mission, leaving specialist Dr Ryan Stone (Sandra Bullock) and mission commander Matt Kowalski (George Clooney) as the only survivors – and left with their only chance of return to Earth being to travel somehow to one of the other space stations in orbit and hitch a ride home on one of their escape pods.

Cuarón’s film is an engrossing and edge-of-the-seat 90 minute thrill ride, combined with a quietly meditative reflection on how our internal pain can make us drift through life. The film is titled Gravity but it’s there to draw attention to what is missing in the film. Not only the obvious – the lack of pull on her body – but also the lack of grounding in Stone herself. In mourning for the loss of a child, Stone has very little ties to earth or indeed anything. She is drifting through her life emotionally, much as she drifts through space itself. When asked why she likes it up in space, she replies “the silence”. She’s a woman untethered from life on earth in more ways than one.

So this is a film that is not just a survival but also a rebirth. We see Stone go through immense, dangerous moments of tension and terror, battling against all the odds to survive and return home. At the same time, the film carries an emotional weight because it’s also about Stone making a conscious decision to survive, to decide to re-engage with and commit to the world – to choose life if you like. Someone suffering from grief and depression as she does at the start of the film, may well have understandably embraced despair. Instead, the film is her coming to terms with the loss of her daughter, and a resolve to live her life for her.

All of this happens of course in the vast majesty of space, a vision beautifully captured by Cuarón. Filmed in an immersive style, with several long takes that don’t draw attention to themselves – a shot length that serves the purpose of the story not vice versa – and Cuarón is happy to use quicker cuts where needed. The camera follows the journey of Stone in epic and intimate detail, with shots exchanged between vast panamas of the astronauts as dots in space, to extreme close ups that bore into Stone’s eyes and capture her emotions from guilt, to hope, to terror. 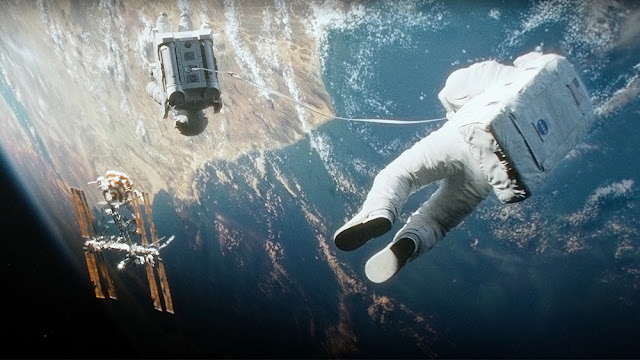 The long opening shot, that ducks and weaves around the weighless astronauts in space as they repair the Hubble telescope is of course a technical marvel, but it also brilliantly established the situation and the joy and fear of being an astronaut, of being allowing in the darkness and emptiness of space. It sets the scene perfectly from later shots that throw you into the adrenalin burning terror of spinning wildly in space with no resistance to slow you down or dodging debris moving at thousands of kilometres per second through space.

In fact the film is almost unbelievably tense – probably the most tense space film since Apollo 13 and in that we actually knew they were coming home alive (in a nice nod to that film, Ed Harris ‘reprises’ his role as mission controller in a voice-only cameo). With its brilliant immersive style, and the emotional bond it swiftly builds with the viewer, it means you will find you hardly draw breath along with the heroes. I’ve seen the film three times and each time after the first viewing I was sure it wouldn’t have the impact the first viewing had. But goddamn it, it works every time. The film is quick – at little under 90 mins – but you won’t feel it (in fact if anything you might be relieved).

Cuarón won the Oscar for direction, and the film is not just a load of flash and technical marvel (although it has a lot of both). It’s grounded in a very simple emotional story of survival, matched with an internal story (not overplayed) of resolving and dealing with grief. A lot of that works from the effectively unflashy performance from Sandra Bullock, who is very good in a part that requires not just physical but also emotional commitment. She’s well supported by George Clooney, who is perfect as the charming but calm and controlled mission commander who mentors her through the early stages of survival in space.

The film has a series of breathtaking set pieces – collapsing Hubbles, spinning astronauts in space, desperate space walks trying to grab any inch of objects to stop them drifting into space, collapsing space stations, burning up on re-entry – all of them shot with an elegance that marries technical excellence and dazzling camerawork and vision with a powerful story. A bag of tricks but one that is delivered with real heart.
Email ThisBlogThis!Share to TwitterShare to FacebookShare to Pinterest
Labels: Alfonso Cuarón, Ed Harris, George Clooney, Sandra Bullock, Space programme, Survivalist films