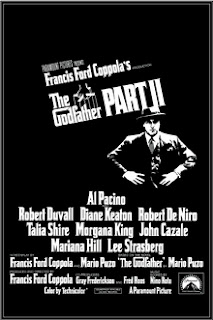 For what shall it profit a man, if he shall gain the whole world, but lose his soul? It’s the question that drives this triumphant, Oscar-laden, sequel to Coppola’s cinema-defining masterpiece, The Godfather to create what is, without doubt, the greatest one-two punch in cinema history, two films that develop and contrast each other naturally it’s very easy to consider them as one perfect film.

It’s 1958 and Michael Corleone (Al Pacino) has seen his power grow to control Crime across several states. However problems confront him including rivalry from Hyman Roth (Lee Strasberg) his business partner, a disaffected capo Frank Pentangeli (Michael V Gazzo) talking to a Senate investigation and growing tensions in his marriage to Kay (Diane Keaton). The story is intercut with the rise to power of his father Vito (Robert DeNiro), a man raising his family in Little Italy and realising the temptations of a life of crime.

Happy with just one Godfather film, Coppola only agreed to a second in return for a pile of cash and complete creative control. He used that to create a film even deeper, richer and mesmeric (perhaps) than the first film. While The Godfather is high grade pulp fiction, shot and assembled with arthouse skill and layered with depth, Part II is a profound family saga, an arthouse epic spliced with rich vein of pulp fiction at its heart. A multi-generational story that illustrates the dark corruption at the heart of America from top to bottom, it also demonstrates the stark differences in personality and action between two ruthless, authoritarian father figures who do all that they do in the name of family, one of whom sees that family prosper and grow around him, the other who destroys everyone near to him.

Coppola’s film removes much of the slightly cuddily family element from the Corleone family to show a darker, bleaker, chillier movie than its landmark predecessor. Coppola uses his control to expand and deepen the Corleone saga both in the past and present, but also in the dark hearts and secrets of a family built on crime, extortion and murder. It’s a thematically rich, engrossing and beautifully assembled piece of film-making. Exquisite in every touch and beat, completely convincing and breath-taking in its confidence it is clearly the greatest sequel ever made.

The film charts the final descent of Michael Corleone into the dark recesses of his own worst desires and instincts. The brutal, unforgiving, unrelenting coldness and absolute certainty matched with the overwhelming hunger to win that has left him hollowed out and unrecognisable from the naïve, idealistic young war hero we were introduced to at the wedding that opens The Godfather. Of course, even at the start of the film, as Michael holds court with a chilling coolness and maintains only awkward contact with his family – all of whom must submit to him and his wishes or face lethal consequences – it’s clear that the man who talked of “it’s my family Kay, it’s not me” is a long, long way away.

During the film we see Michael seem to harden even further, an adamantine chillness captured superbly by Al Pacino. In, without doubt, the greatest performance of his career, Pacino restrains bar maybe three times, the explosive energy and ferocity that has been the hallmark of his career (a feat that allegedly made him physically ill). Instead, he presents a Michael who is an almost pathologically cold fish, a fiercely intelligent, scheming observer with eyes that observe and understand everything, jet black boreholes that suggest only whirlpools of emptiness behind them. He’s unrelenting, lacks any doubt and (it becomes clear) has not a vestige of pity left in him, with empathy forced out of his body like water from a squeezed sponge. Pacino prowls every frame like a quiet tiger, oozing sharpness, intelligence and lethal, ruthless ambition.

Everything is done to protect and secure his family and its legacy, but each action seems to strip him one by one of everyone he claims to be protecting. His children seem to live in intimidation and later terror of him. His wife turns from misery to loathing to being ejected from the family home, even aborting her pregnancy to prevent herself bringing another Corleone into the world (a reaction that leads to a final, relationship severing explosion of rage from Michael). His brother Fredo, poor sweet, foolish Fredo, is sacrificed to an unrelenting desire for revenge. The man who did everything for “the family” ends the film by having his last surviving brother executed. The brother who, the film's coda reveals, was the only member of the family to support his signing up for service in World War Two.

As Coppola’s camera drills into the face of Michael, cold, greying, alone in an autumnal garden – and how often the film simply studies the ruthless calculation of Michael, the man who understands every move everyone makes before they even make it – you know we are looking at a man who has damned himself, who has destroyed everything who claims to hold dear while working to protect it.

Brilliantly, Coppola intercuts the storyline of Michael’s damning collapse into complete moral damnation with the rise of his father. The Young Vito Corleone – played with Oscar-winning skill by De Niro who superbly channels the basic facets of Brando’s performance mixed with his own charm – arrives in America to find it a land as in thrall to the rule of the gangs as his hometown in Sicily. Like Michael in the first film, he is tempted by the world of crime and finds he has a natural aptitude for it: like his son he is a man who people follow, and the man who has the will to do what must be done. Like him he is an empire builder who commands respect and honour. 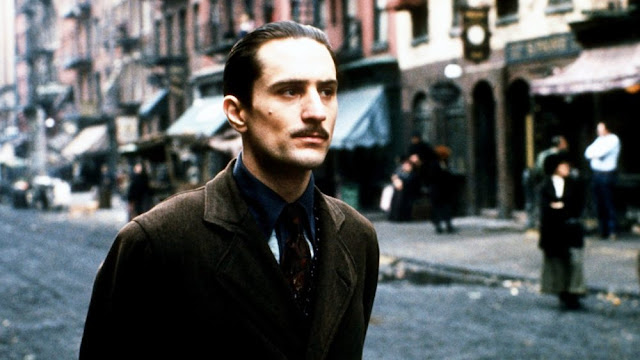 But unlike his son, he is a man capable of warmth, of empathy. He is man who can be playful, who respects others, who can feel forgiveness, who sees others as people, not just (as Michael does) simply being tools to be manipulated. Vito may be a murderer like his son, but he loves his wife, he loves his children and he can form bonds with them – natural, warm, loving bonds – that Michael can only dream of doing. For Vito it is all about the family, and providing for them is what inspires his actions. For Michael it’s words, but for Vito – it is everything.

Coppola masterfully intercuts these two storylines so they brilliantly comment and contrast with each other. Each step of Michael’s struggles to overcome the plots around him, are perfectly bookended with contrasting moments of Vito’s own rise to power, and the bonds of loyalty he builds even as Michael destroys those own bonds in his own life.

But then Michael is dealing with high stakes. While Vito’s early life shows Mafiosi running Little Italy, and calling the shots on the neighbourhood, a local tradition inherited en masse from the mother land, Michael moves in the worlds of government corruption. The empire we see Vito start to build is destined under his son to interfere in the rule of whole countries in Cuba, and commit unspeakable crimes to bring Senators and witnesses under their control in Senate Hearings into Organised Crime.

Coppola had intended the storyline around the reluctant family witness to be Clemenza, but Richard Castellano famously refused to reprise his role unless he was allowed to write his own dialogue. (The Godfather Part II was blighted with actor disputes: Brando refused to reprise his role in the film’s coda, while James Caan was paid more for a day’s work than he was for the whole of the first film). Instead the role was passed to Michael V Gazzo (Oscar nominated) as Frankie Pentangali, a loud-mouthed Capo manipulated into thinking he has been betrayed by the family. This threat hangs over the second half of the film – but Michael barely seems to break sweat under interrogation.

He has more problems with the Meyer Lansky inspired Hyman Roth (played by Pacino’s teacher, the legendary Lee Strasberg – also Oscar nominated). Roth it is who immerses Michael in a corrupt takeover of the Cuban government by the Mafia – an attempt foiled by the revolution – and Roth who becomes his nemesis, an old man in a hurry, who believes he can match the ruthlessness of this man without a soul. Coppola’s scenes of Cuban excess – not to mention the danger on the street as the country starts to tear itself apart – are of course masterful.

Cuba destroys Fredo, a snivelling John Cazale (inexplicably not nominated, despite extraordinary work here – never mind nomination he arguably should have won). Cazale’s Fredo is endearing but simple, a fundamentally weak man in a family of wolves, whose guilt is almost embarrassingly easily unveiled. Petulantly – but terrifyingly – raging late in the film at Michael at being passed over, he sits (sweaty and veins throbbing) in a reclining chair that bounces on each point he makes – a simple touch that makes him seem more and more impotent and pathetic every second. 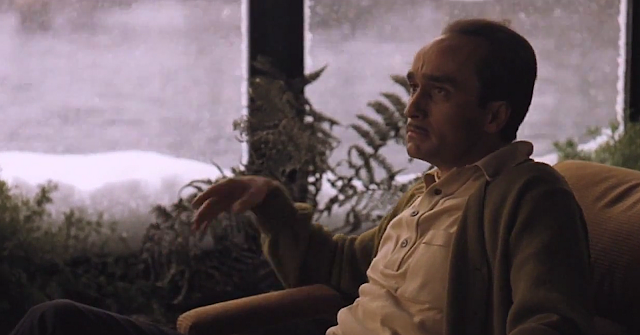 The film echoes much of the structure of the first film, but here retold with a chilling coldness as the warm heart that – for all his crimes – Vito bought to this family is removed. The opening family event, Anthony’s confirmation, is a public show with no personality at all, where the Italians feel all at sea, their culture not known or cared for. Doors are closed on Kay with an alarming regularity – their marriage is so non-functional that even at the start they seem to have very little to say to each other. Vito returns to Sicily, as Michael did, but this time to extract revenge for his parents not to fall in love. The ending of the film culminates in a dark, ruminative and tragic hinged cleansing of Michael’s – crucially not the families but Michael personally – enemies.

The film is blessed with a brilliant array of supporting turns, from Diane Keaton’s soft-faced sadness masking deep and lasting resentment as Kay, to a flashily amusing tone from GD Spranlin as the greasily corrupt Senator. Robert Duvall does unsung but powerful work as a Tom Hagen coldly loyal, perhaps even in slight fear of his adopted brother, but despite his seeming decency willing to carry out truly terrible deeds for the family. Talia Shire (also nominated) is great as the rebellious Connie who pleads in vain for Fredo’s salvation. 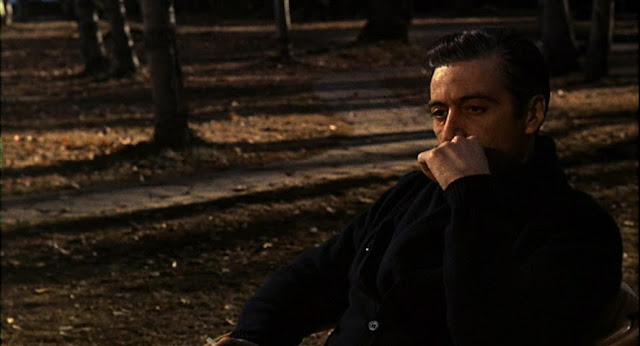 This is all beautifully packaged together by Coppola into a film that meditates on the building and the destruction of a family, two stories neatly told together in parallel, with each echoing the other. It is a film shot at a riveting but controlled pace, that uses the classical filmic style of the original but mixed even further with the genius shooting of Gordon Willis to add a dark tinged 1970s style to ever shot. The film is an art house classic, but also a superb plot boiler, a gangster film that tells us profound truths about the attitudes that make us men and those that destroy us, just as it suggests that the darkness at the heart of crime will eventually consume the very thing it starts out to protect (even if it does take generations). While it is not as entertaining or engaging perhaps as the first film – it is perhaps an even greater achievement, a superb triumph of atmosphere and tone and a terrifying insight into the darkness that man can achieve.