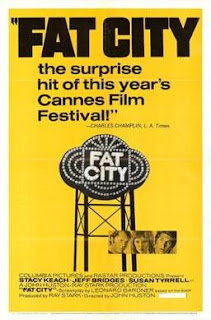 The American Dream has an underbelly. For all those dreamers who find fame, fortune and glory in the Land of Free there are thousands who never made it. Thousands who stayed rooted at the bottom of the rung of the ladder and saw their dreams disappear and lives head into turnaround. Fat City – the good life, according to the slang of San Francisco, the crazy goal you’ll never achieve – is all about those left behind by their dreams.

Billy Tully (Stacy Keach) is a former boxer, now down on his luck and now possibly struggling with alcoholism. Ernie Munger (Jeff Bridges) is a young prospect who shows some promise in the ring. Both of them dream of getting into the limelight – but what hope do they have when it’s nearly impossible to turn your life around in smalltown America?

John Huston’s film is unflashily assembled, but carries a fundamental emotional power as it investigates with a simplicity and honesty the difficult dynamics of real life. It’s a film which has no pat answers, no simple solutions and doesn’t offer much in the way of hope. Which is not to say that it is a depressing vision of the world. Just a recognisable one. Because, sure, for most of us there isn’t any real chance of seeing our lives change.

Huston’s film – brilliantly shot with a 1970’s muddy graininess mixed with flashes of revealing light by Conrad Hall – is wonderfully well observed and beautifully paced and keeps refreshingly loyal to its essentially downbeat vision of life. There is nothing forced in Huston’s well-paced touch and his embracing of the ordinariness of the drama and the lives of the characters. Because for both of them what we see in this film – and it ain’t much – is still clearly the high point of their life. Just getting into the ring and being beat (and only one fight in the film ends with one of our heroes winning – and even then he’s unaware of his win, he’s so punchdrunk) makes them something rather than nothing. These small moments are the best they can hope for.

Because both men have lives of nothingness in front of them. Keach’s Tully is a man whose best years are already behind them, but keeps up a touching air of hope and belief that maybe that could change, even while he drunkenly stumbles from one moment to the next. And maybe he did have something in the past – but he certainly doesn’t have something to come. Keach captures this superbly – like a reliable pro embracing what he feels might be the highlight of his career – investing Tully with a gentleness but also touch of fantasy, a man who can’t quite accept where his life is, but despite a lack of bitterness he’s still a man balancing fantasies.

Jeff Bridges makes a perfect balance to this amiable failure of a man as Ernie, a young man who may well have more promise than Tully but lacks any sense of personal drive. He’s a friendly but empty shell. While Tully at least goes through spells of wanting success – even if he drifts and falls into alcoholic patches of non-achievement and becomes lost in recollections – Ernie has no desire. He’ll allow himself to be put forward but will do no work at all to push himself forward. He’s a young man with no hurry, a man who seems destined to never achieve anything because he has no desire to do so. It’s a great performance of amiable emptiness from Bridges.

But then you hope that Ernie won’t be heading to the alcoholism that consumes Tully and his romantic interest Orma. Played by an Oscar-nominated Susan Tyrell, Orma is the picture of a failed life, a semi-bloated, rambling alcoholic who oscillates between small insights and far more common drunken ramblings and bitter drunken whining but believes strongly in what she does. Huston’s film places her firmly as much of a drifter through life as Ernie in her way, taking up with Tully while her lover serves prison time – and moving easily and with little impact from one domestic set-up to another. Tyrell and Keach give outstandingly strong performances of drunkenness, never over-playing and totally convincing in their slurred speech, attempts to not appear as drunk as they are and emotional swings from calm to sudden and consuming fury.

But then what is there to look forward to in this life than the next drink? Certainly not the fights. For all the dreams of trainer Ruben (Nicolas Colosanto – very good) to find the next big thing, every fight we see is a tragic and painful affair mostly ending in defeat. Ruben drives carfuls of beaten, ring fodder from place to place, watches them get duffed up and then takes them home all the while dreaming of a title shot. It is dreams shared by Tully – even while we watch his slow, alcoholic fuelled body struggle to get through a few minutes of shadow boxing.

But then that’s the message of Fat City the anti-Rocky – and probably more realistic for it. Huston;s simple touch and pure vision help to make this one of his finest films, his unfussy and naturalistic camera encouraging truthful and powerful performances from his leads. And every small moment is full of it, including a marvellous wordless sequence that sees Tully’s Mexican opponent arrive in town (on a rundown bus), wordlessly check into a motel, piss blood and then head to the ring to be (only just) beaten – a moment of victory so fleeting and small it barely counts (and is only a hiatus on Tully’s return to shambling from bar to bar on the streets). The American Dream is a great thing – but for many people it’s just that: a dream.
Email ThisBlogThis!Share to TwitterShare to FacebookShare to Pinterest
Labels: Boxing films, Candy Clark, Jeff Bridges, John Huston, Nicholas Colasanto, Social issues, Stacy Keach, Susan Tyrell