Butch Cassidy and the Sundance Kid (1969) 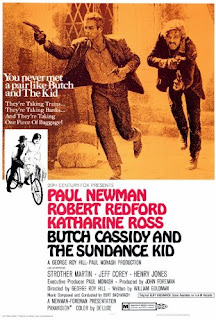 Butch Cassidy and the Sundance Kid was a monster hit in 1969. It struck cinematic gold by combining Newman (originally first choice for the Sundance Kid) and Redford (fourth choice at best after Jack Lemmon – and what a different film that would have been! – Warren Beatty and Steve McQueen) and got the tone just about spot on between old school charm and hit 1960’s chic. It reinvents no wheels, but it’s a prime slice of classic Hollywood entertainment.

In the dying days of the Old West, the Hole in the Wall Gang is finding trade tough. The banks are wising up to how easy they are to rob, and the new idea of holding up trains is fraught with danger. Not least from the powerful backers who don’t like to see their money and goods being half-inched off the tracks by a gang of desperados. The leader of the gang, affable, fun-loving Butch Cassidy (Paul Newman) and his sidekick sardonic ace-shot the Sundance Kid (Robert Redford) continue to ply their trade of stealing, but they are fighting a losing battle. Hounded out of the states by a crack squad of lawman they make their way to Bolivia – but find the life of crime isn’t easier there either, what with no one speaking English and the Bolivian army being even more trigger happy than the American law and order forces. What’s a couple of guys to do?

Butch Cassidy and the Sundance Kid is really a celebration of nostalgia, repackaged with a wry sense of 60s cool that merrily seizes on its lead characters as the sort of anti-authoritarian, free-spirited, jokers who were bucking the rules of Vietnam-era America. But fundamentally at heart, it’s a joke filled sad reflection on a lost America and a lost sense of freedom – even if it was the freedom for two basically decent guys to make a living from robbing banks – that even shoots most of its opening segment in a romantic sepia.

Because this is all about Butch and Sundance being two guys left behind by progress. Their way of life is dying out around them – the opening sequence sees Butch walk around a new bank, with its impressive new security measures. What happened to the beautiful old bank? Asks Butch: “People kept robbing it” comes the cold response. This follows on from a recreation of old sepia newsreal footage that states that the entire membership of the Hole in the Wall Gang is now dead – meaning that we know where the film is heading from day one. It’s a world where the train and modern communications are leaving our heroes behind. Even the humble bicycle is a sign of the future – “the horse is dead!” crows a bike salesman to a crowd of red necks.

The film may be cool and whipper-sharp in its style and the characterisation of its lead characters, but it’s a firmly nostalgic film that sentimentalises the Wild West and our heroes. No wonder at its conclusion it freeze frames (famously) as the heroes charge out to certain death in a shoot-out with the Bolivian army. It’s like Hill can’t bear seeing these guys torn apart ala Bonnie and Clyde or The Wild Bunch by the cold hard truth of a bullet.

The film makes an interesting comparison with The Wild Bunch released the same year. In many ways the latter is a more traditional western, both in its style and its content. But in every other way it’s a far more radical piece, really embracing the lack of rules, the cruelty and the lack of glamour of life in the west – and ending with its heroes being shot to pieces on screen in a prolonged bloody shoot out that set a new record for use of squibs. Compared to this, Butch Cassidy is very light stuff, with its final image almost hopeful in its sepia toned romanticism.

Not that it’s not entertaining for all that. Its sense of sixties defiance is perfectly captured in the film’s lightness and playfulness – and in the fine lines and gags in William Goldman’s well structured (and Oscar winning) script. From its opening lines “Most of what follows is true” through the offbeat wisecracks of its lead, it’s a lot of fun. Newman and Redford are both just about perfect. Newman is the very picture of relaxed, casual cool while Redford’s style of handsame smartness works perfectly for the more plugged in Sundance. The two of them also form a very swinging sixties sexfree-Thruple with Katharine Ross as Sundance’s girlfriend, but essentially a companion to both men.

Not that Etta isn’t aware that the good times are coming to end. She makes it clear she won’t stick around to watch them die, and when (late in the film) she announces she will return to the US, it’s a clear sign to everyone that things are near the end. But then Butch and Sundance have already faced the cold realities, as an attempt to go straight protecting bank money from robbers see them gun down a group of bandits (the first real bloodshed in the film), an action that leaves them both slightly stunned.

It’s very different from the hijinks of the film’s first three quarters. The two of them spend a chunk of the film trying to evade the lawmen chasing them, each attempt failing, ending in them making a desperate jump off a cliff into water (because no one would follow unless they had to) and even their early career robbing banks in Bolivia is hampered by their inability to speak Spanish (cue a series of lessons from Eta on the rudiments of larceny in Spanish). The film’s lightness and warmth early on lies behind its popularity.

Butch Cassidy is a film that is designed to please and for you to love it. It has two fine actors giving superbly entertaining performances. It has some wonderful scenes, not least the introduction of each character, two superb scenes (Butch’s facing down of a challenge against his leadership of the gang is a scene so good I don’t think the film bests it). But Hill’s film is also a cosy and safe picture, that drips with sentimentality towards its leads and nostalgia for its era. It’s successful because it’s such an unchallenging and safe film.
Email ThisBlogThis!Share to TwitterShare to FacebookShare to Pinterest
Labels: Cloris Leachman, George Roy Hill, Jeff Corey, Katharine Ross, Kenneth Mars, Paul Newman, Robert Redford, Strother Martin, Westerns