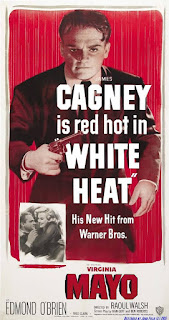 After winning an Oscar for Yankee Doodle Dandy, Cagney left Warner Brothers to form his own production company. When that folded, he swallowed his pride and re-entered the Warners’ fold. Money was driving the relationship: and it was the pay cheque that got Cagney to return one last time to the role of a psychotic gangster in White Heat. And if he had to go back, why not make that gangster the most psychotic of the lot? After all who else could make it to “the top of the world”?

Cody Jarrett (James Cagney) is the leader of a gang of criminals, to whom no act of larceny, violence or murder is taboo. A botched train hijack – during which Jarrett shoots two unarmed train drivers – attracts the full attention of the law, but Jarrett dodges justice by having himself sent down for a minor crime that happened at the same time as the train hijack. Not fooled, the Feds send an undercover operative, Hank (Edmond O’Brien), into the prison as Cody’s cellmate “Vic Prado”, tasked with getting the details of the train job and locating the mysterious fixer who set up the job. But such schemes didn’t take into account Jarrett’s psychological disturbance – powered above all by his obsessive, overwhelming love for his mother (Margaret Wycherly), the one dominant influence over his life.

Raoul Walsh’s film is a brutally efficient gangster flick which may be a little too long (the mechanisms of tracing and tracking a car are covered in far too great a depth…), but ticks all the boxes of the genre with exceptional skill and dexterity. It’s shoot-from-the-hip (literally) melodrama, and has all the internal logic of a schoolground game of cops and robbers, but Walsh’s direction is pin-point perfect, and the film is based around a series of stunning and effective set-pieces and crammed with a sort of deep (even disturbing) psychological insight that puts it miles ahead of many of films of the genre. Walsh also throws in some of the finest stylistic touches of film noir, with Virginia Mayo’s femme fatale, darkened frames, dubious morals among even our heroes (one of whom is a practised deceiver and liar) and a whirlwind monster at the centre.

But the film soars and flies because of Cagney, and the no-holds barred sharpness of Jarrett. The film revolves above all around the deep emotional emptiness and need in Jarrett, which sees him lean on O’Brien’s Falon (“like my kid brother!”) and, most famously, fixate like a toddler on his mother. Freud would have had a field day with Jarrett’s obsessive love for his mother, with Cagney turning him into the little boy lost. Consumed with headaches, he literally climbs into her lap so she can comfort him. The slightest criticism of her leads to instant reaction (not least knocking his wife off her chair – how can the poor woman compete with this beatified mother figure?)

This culminates in one of the film’s most famous sequences, as Jarrett digests in prison the news that his mother has died. Sitting in a crowded dining room, he passes word down to a new inmate for an update on his mother. Slowly the question is passed down the line of prisoners – and with trepidation the news of her death is passed back. And here is the Cagney magic. He seems too stunned at first to take it in then a series of low moans explodes into a titanic screaming fit, matched only by the violence he takes out on all who stand in his way. Walsh and Cagney kept the response secret from the entire room of 300 extras, all of whom seem as stunned as us by Jarrett’s total lack of control, his complete consumption in grief.

Cagney’s performance is just about perfect, a simmering mummy’s boy who is also a charismatic leader of men. A dangerous psycho who seems aware that he is not quite normal. A lonely man desperate for love. And Cagney has so many beautiful touches that could only be him – the quip as he plugs with bullets a car boot with a luckless gang member in it, the sly kick away at Virginia Mayo, that screaming sequence. It’s a performance of complete power and charisma, the gangster psychoanalysed and reduced to his bare essentials for a personality barely functional and obsessed with his mother.

Margaret Wycherly is similarly excellent as that mother, as sly and self-confident as her son and clearly as accomplished at leading a gang as him (I love the smug half smile she gives herself after evading the FBI tail she picks up). Edmond O’Brien does sterling work in the “straight man” role of the undercover cop, walking a line between judging and even perhaps sorta liking Jarrett a bit (even if he does get saddled with the mandatory “that’s the moral of the story” final line). Virginia Mayo is a wonderful mix of sex appeal and needling cheapness as Jarrett’s two-faced wife.

The film culminates in one of the most famous endings of all time – one you’ll know even if you haven’t seen the film – as the law catches up with Jarrett at last in a shoot-out at a gas plant. Finally driven mad by betrayal and abandonment – although lord Cagney’s performance makes clear that only a tenuous grip on sanity has been present in Jarrett from the start, fractured beyond repair by the loss of his mother – Jarrett insanely shoots at the police from atop a burning gas plant, before immolating himself (and most of the factory) with the cry “Made it Ma! Top of the world!”. As Jarrett heads down to a firey hell, so Cagney signed off on the gangster flick with perhaps the most dangerous, disturbed and also intriguing gangster on film. It's such a mighty performance that the Hays-Code mandated final line of tutting disapproval at the criminal life from O'Brien feels even more forced and unnecessary than ever.
Email ThisBlogThis!Share to TwitterShare to FacebookShare to Pinterest
Labels: Edmond O'Brien, Film noir, Gangster films, James Cagney, Margaret Wycherly, Raoul Walsh, Virginia Mayo