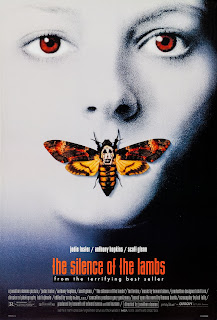 Is there a more unlikely Oscar winner than The Silence of the Lambs? In fact, double down on that: is there a more unlikely film to have won all five of the Big Ones – Picture, Director, Actor, Actress and Screenplay – only the third film in history to have achieved that (It Happened One Night and One Flew Over the Cuckoo’s Nest being the others)? Re-watching the film, it’s actually a triumphant vindication for Hollywood to have chosen a thriller for the ages, a complex and intriguing puzzle wrapped in an unsettling outer layer of thrills and horror, as if the academy was (late in the day) finally tipping an award-lined hat to the film’s spiritual grandfather, Hitchcock himself.

Clarice Starling (Jodie Foster) is a trainee FBI agent, in the final weeks before her graduation. Out of the blue she is plucked from Quantico by the head of the Behavioural Science Unit, Jack Crawford (Scott Glenn), to interview notorious psychiatrist-turned-cannibalistic-serial-killer Dr Hannibal Lecter (Anthony Hopkins), now interned in a psychiatric prison-cum-dungeon in Baltimore. Crawford hopes the Lecter might be able to shed light on the motives of “Buffalo Bill” (Ted Levine), a serial killer kidnapping and skinning young women across a number of states. Lecter can shed some light – but the price is an opportunity to investigate further into the psyche of the determined and ambitious Starling. A three-way game of cat-and-mouse between Bill, Clarice and Lecter soon starts to emerge.

Demme’s film is a sublimely made entertainment that brilliantly pulls together the trappings of multiple genres (there are splashes of horror, thriller, police procedural, romance and black comedy to name but a few) into an unsettlingly tense and engrossing whole. It’s truly a film Hitchcock would have been proud of, a masterfully assembled thrill ride where every shot serves a purpose, and each scene is carefully constructed to establish a clear story and push the audience’s buttons. It has two of the best tense “prolonged misdirects” in film history (wittily signposted in advance by an early car chase that is revealed in a pull-away to be a training exercise in Quantico – don’t trust your eyes!) and it brilliantly immerses you in the world and emotions of Clarice Starling.

Demme’s aim was to get us to empathise above all with Clarice, as she descends into the dark underbelly of this terrifying world. Demme uses a carefully selected combination of POV shots and straight-to-camera addresses to deliberately put us into the position of actually “being” Clarice Starling. From following her perspective through rooms and corridors, to seeing the characters she is talking to address the camera directly as if talking to us, through to carefully placed close-up shots that allow us to study the thoughts and feelings travelling across Clarice’s face, it brilliantly allows us to invest overwhelmingly in her without us even really noticing we are doing it.

And of course that is put together with Jodie Foster’s extraordinarily brilliant performance in the role. One of the film’s many strengths is exploring the nature of being a determined, brave and ambitious – but still slight and feminine – woman in the alpha-male world of crime investigation. Clarice fends off in virtually every scene not just discrimination and instant judgement, but a parade of half-spoken advances and flirtations from male colleagues. Foster’s brilliance is to make a character who is determined but humane, slightly vulnerable while never weak. She’s the key driver of the story, but also both an insider and outsider in her world, partly motivated by a desire to prove herself, partly by an attempt to vanquish haunting childhood memories of weakness and loss. 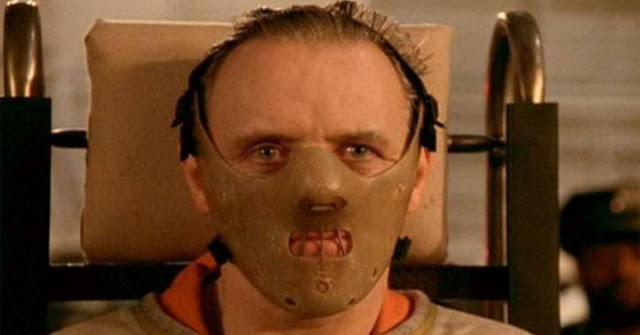 It’s these feelings under the surface that attract the interest of Hannibal Lecter, and the strange dance between them is the heart of the film’s appeal and it’s magic. Why does Lecter want to know about the facts of Starling’s life (that quid pro quo he archly asks for)? Does he want to analyse her? Does he want to help? Does he want to amuse himself with her terrible memories? Or is he just bored? He hardly seems to be certain himself, but the intimacy shared revelations provide is neatly played with by Demme in sequences between the two (they barely share the frame by the way more than twice) that hum with a tension of danger, but also a thrill of illicit romance, mixed with incestuous interest (Starling the orphan, Lecter the father-like man of wisdom helping her catch the killer). And it works with us as well – we are so invested in Starling that, just like her, we end up liking Lecter (even though we know we shouldn’t).

Of course it helps that Hannibal Lecter is portrayed in a performance of magnetic, career-defining brilliance by Hopkins. Hopkins modestly claimed playing Lecter was easy once you mastered the voice and the physicality – but that’s to downplay the extraordinary skill mastering those aspects concern, and the bravura brilliance with which Hopkins plays to the camera but never tips into absurdism. It’s an arch, knowing, winking performance that also carries with it an intense, psychotic menace, a delirious capacity for violence (as we find out). Demme introduces the character sublimely – after the build-up, his ram-rod stillness, polite manner and refined behaviour are somehow even more unsettling. Sure Brian Cox in Manhunter may be more conventionally chilling, but Hopkins is like an elemental demon playing with our childhood bogeyman fears, a guy who seems even more dangerous as he playfully chats one minute, then beats you to death with a truncheon the next. 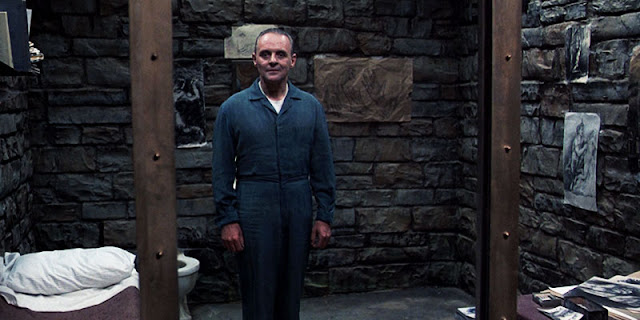 The scenes between these two characters dominate the film (even if they take up no more than ten minutes of its runtime), and their relationship (beautifully shot as a game of one cagey upmanship that turns into semi-flirting, that turns into something in between) defines the movie and its legacy. Lecter’s magnetism was such that in later movies he would increasingly become an anti-hero of sorts, a lord of misrule rather than a brutal and indiscriminate killer, but here he’s terrifying and satanic, just as Starling is courageous and noble as the lady on a quest. 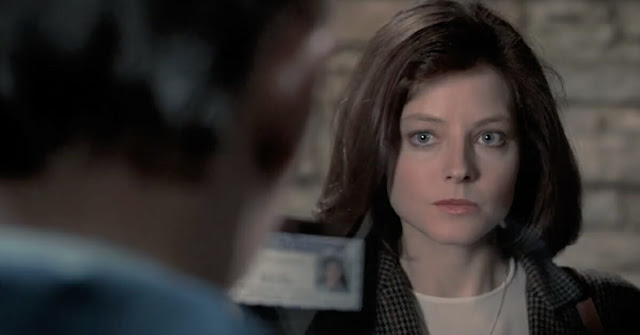 And that quest targets Buffalo Bill – a deeply unsettling performance of psychological unease and self-loathing by Ted Levine. The film was controversial at the time for its killer being both a transsexual and gay (although the film makes clear it’s a desire to be anyone apart from who he is that drives all these feelings), especially as at the time these groups were barely represented positively in the movies. But it also makes for singularly unsettling character, living in a subterranean cave-like basement, surrounded by moths, his voice slurred childishly while carrying no sense of shame or regret for his actions.

The hunt for Bill is the film’s story, and Demme uses the devices of cinema to make this as tense and unsettling an experience as needed. The camera prowls terrifyingly around Bill’s domains. Howard Shore’s score makes a deeply unnerving use of mournful refrains. Frequently scenes – such as the post-mortem inspection of a victim’s body – are often silently scored, making the mechanical noises of the investigator’s trade (such as the loudly clicking and whirring camera) deeply jarring. The film is grim, but relies more on reaction rather than bathing us in horrors, and implication brings the greatest terror. Every sequence of the film is perfectly assembled to leave us struggling to breathe – not least as events place Starling in more and more peril.

With its playful sense of black comedy, mixed with genuine terror and thrills, The Silence of the Lambs genuinely feels like the film Hitchcock was born to make. Everything in the film is perfectly assembled to serve the film’s aims – there is not a foot wrong in its assembly, and it’s sad that Demme never hit these sort of heights again. But the film is like a twisted companion piece to Psycho (only better), and in Hopkins and Foster produced two landmark performances. While the film engrosses us in Starling’s struggles in a man’s world, it also overwhelms us with Hopkins’ devilish magnetism and dark mystery. And what to make of the relationship between Starling and Lecter? It’s a mystery so enigmatic that it continues to grip today and it’s the secret behind the success of this compelling masterpiece.
Email ThisBlogThis!Share to TwitterShare to FacebookShare to Pinterest
Labels: Anthony Hopkins, Best Picture, Horror film, Jodie Foster, Jonathan Demme, Scott Glenn, Ted Levine, Thriller