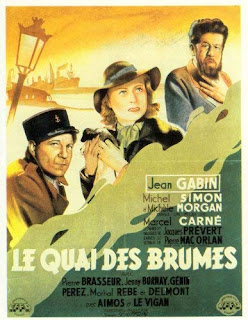 It translates as “Port of Shadows” and it’s the shadows you are likely to remember in this noirish tinged classic of French cinema. A major success story when it was released in France, it also stands as some sort of milestone as being one of the few films condemned by both the pre-Vichy French government and Nazi Germany. More pleasingly, it’s also a firm testament to the brilliance and vibrancy of pre-War French cinema and the creative imagination of Marcel Carné.

Jean (Jean Gabin) is a soldier on the run, deserting his regiment to lead his own life in South America. Arriving in the port of Le Havre, he ends up in a run-down bar on the edge of the town where he meets the beautiful young Nelly (Michèle Morgan) a woman on the run herself from two unpleasant men. The first is local gangster Lucien (Pierre Brasseur) a braggart with whom Jean has already had a few run-ins. The other, even more dangerous, is Zabel (Michel Simon) Nelly’s godfather, a ruthless man under a genial façade who is obsessed with Nelly. Jean and Nelly fall in love, but how far will Jean go to put his own hopes for the future in doubt to protect Nelly?

Shadows dominate Carné’s beautifully atmospheric film. Jean emerges as if from nowhere on the road to Le Havre – nearly run over by the truck driver who picks him up. The bar is buried in the mists of the town. Shadows loom from every building and throw most of the city into a mysterious half-light. The action largely takes place in backrooms and cellars. Every frame tells you from the start things will not turn out well, with every decision carrying an underplayed air of foreboding. You can just tell every moment is putting another nail in the coffin of Jean’s chances of escape to that new life. The film is a brilliant slice of noir, expertly assembled with an artist’s eye by Carné, one of the most overlooked genius directors of his era.

This darkened, gloomy style of the picture echoes the intentions of Carné and his regular collaborator, scriptwriter Jacques Prévert. The focus on the picture is the individual – in this case Jean and Nelly –trying to escape the control of both the state (the army) and also the domineering bullies that hold the local power (Lucien and Zabel). It’s no coincidence that Jean is an army deserter, and there is no sense of guilt on his part or even a fraction of recrimination is aimed towards him from anyone he encounters. Jean himself talks despairingly of the grim reality of killing and his wish to make his own choices. Carné was originally to make the film in Germany, but Goebbels was not having any film made in Berlin where the hero was an army deserter.

So instead the film was shifted – wisely – back to France, not the French government was that happy either. With Carné and Prévert’s vision of a listless, tired, corrupted France where people like Jean simply refuse (it seems) to do what they are told, and where the few representatives of local government we meet are trivial non-entities, it’s not a surprise that the film was soon being blamed for sapping French spirit. As a sop to the French criticism of the script (and many of the films backers were desperate for its downbeat nihilism to be replaced by a more conventional upbeat, romantic ending) Jean does at least show respect for his army uniform – despite everything it’s never dirty, and when he takes it off its neatly folded. Today it seems even more like an impressionistic touch.

It’s the nihilism that runs through the film. We know Jean is good guy – he encounters a dog on the road to Le Havre that follows him with a singular devotion, unable to bear being parted from him – but the film itself has a shadowy feeling of despair and destruction throughout. Jean feels like a doomed hero from the start, a passive figure despite his bravado, who impulsively drifts from event to event – it’s when he chooses to become engaged that he dooms himself. Nelly is seemingly at first a femme fatale – and her reveal is a masterstroke of cinema – but really she’s as much a victim as Jean, someone very vulnerable, lonely and scared who wants a way out but can’t see how to even begin to find one. But then even the nemesis that runs through the film is low-key and trivial – Lucien is a joke, while Zabel for all his creepiness is also little more than a novelty gift shop owner.

The power of the film comes from seeing these two trapped figures surrounded by a world of darkness, listless depression and emptiness. And of course from the performances. The film is a reminder again that at this time Jean Gabin may well have been the greatest actor in the world. With a cigarette dangling, raffish cool under a surly salt-of-the-earth taciturnity, he turns Jean into the sort of enigmatic noir-hero years before the term was evented. Dripping with charisma in every frame, he’s both a Bogartish cynic and a De Niroish slice of muscle, a working class martyr. Nearly as good is Michèle Morgan, vulnerable and yearning into a surface of sexy cool. The two make a winningly attractive pair, not just sexy but with a growing romantic feeling.

It’s no wonder Jean throws himself into threatening and roughing up the pathetically weasily Lucien (Pierre Brasseur very good as a weak-willed bully who can lash out with the viciousness of a child) and squaring up to domineering Zabel. Michel Simon is terrific as the grandfatherly shop owner whose own dark obsessions and possible perversions become harder and harder to ignore. These two very different threats stand at opposite ends of the film and both contribute to its bleak ending.

Because of course Jean isn’t going to make that boat. The act of violence the film finally unleashes – after all that foreboding warning that it’s coming – is suitably shocking in a 1930s way, while the eventual fall of Jean is both fitting and also tragic in its low-key abruptness (it was later echoed by Brian de Palma in Carlito’s Way). With its gloomy atmosphere, its grim foreboding but also passionate love story at its heart, Quai des Brumes is a classic of French poetic realism.
Email ThisBlogThis!Share to TwitterShare to FacebookShare to Pinterest
Labels: Édouard Delmont, Film noir, French cinema, Jean Gabin, Marcel Carné, Michel Simon, Michèle Morgan, Pierre Brasseur, Raymond Aimos