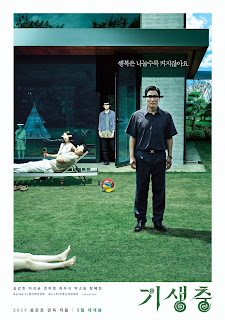 I’m writing this in the glorious after-glow of Parasite’s shock win for Best Picture, finally breaking (after 92 years!) the taboo on foreign language films lifting the Big One at the Hollywood’s annual love in. So let’s just say: not only is it a delight to see Hollywood breaking “the 1-inch barrier of subtitles” (to quote Bong from his Best Director at the Golden Globes), but also it’s a thrill to see the Oscar go to something that can make a legitimate claim to being the Best Picture of the Year – not to mention a film that speaks to the modern world in a way very few nominees have done since Get Out.

Bong’s superb picture has found such universal appeal perhaps because it so completely understands questions of class and wealth in our modern world. Set in an unnamed South Korean city, we are introduced to both the extreme poor and the extreme rich. At the bottom end of the scale – living in a half-basement apartment – are the Kim family. At the top – almost literally, living in a sprawling, modernist apartment bathed in sun with a large private garden at the top of a hill – are the Park family. When son Kim Ki-woo (Choi Woo-Shik) lands a job at the Parks’ teaching English to their daughter, he quickly begins to work with sister Ki-jeong (Park So-dam) to manipulate Park Yeon-gyo (Cho Yeo-jeung) to hire each member of the family in turn in a job in the household. But from there, the best laid plans spiral firmly out of control.

The less you know about the structure and events of Parasite going into it, the more you will gain from the film. What Bong has created here is a superb medley of genres, developing from a black-comedy-heist-caper into thriller territory, with a splash of horror and lashings of intelligently subtle social commentary. This is a film for the modern age, addressing questions of class, cultural resentment, societal divisions and the damaging impact of the super-rich and super-poor living side-by-side in ways that are profoundly insightful and fundamentally universal.

Who are the parasites in Parasite? You could argue its society itself. At first it seems obvious on the surface that the Kims – living half beneath the surface of the city itself, inveigling their way into homes and roles, ruthless in acquiring their aims – fit the bill. But what about the Parks? So sheltered by money (“She can afford to be nice” says Kim dismissively of Mrs Park) they seem barely able to organise their own lives without the aid of an army of employees, placing no real value on them as people, only as extensions of their own house. 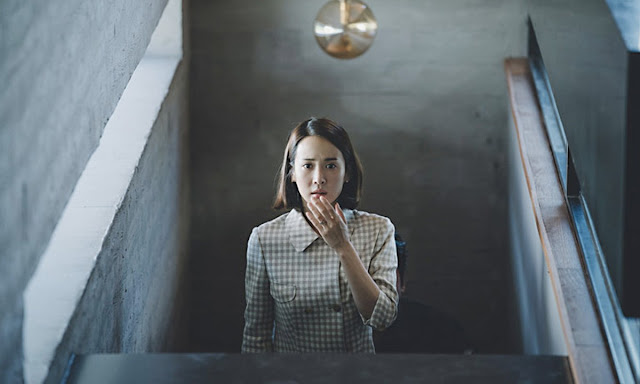 It’s all part of Bong’s skilful shift of perceptions throughout the film: the Kims are in some ways sympathetic (for the extreme poverty and desperation) but also they have no concern about hurting other people or manipulating them to get what they want. At the same time, we invest in seeing the well laid plans come to fruition, despite the impact it has on other people affected by their schemes. But as the film progresses, the innate selfishness and thoughtlessness of the Parks, their assumptions that their problems are of more concern than other people’s, that the world should revolve around them, makes them less sympathetic and the Kims more rounded and human.

Bong’s film brilliantly outlines this class war, every frame enforcing the insane split between such completely different worlds all rammed into the same city. The Parks’ apartment is a triumph of modernist design, the Kims’ flat a lightless dive with a regular tramp who pisses just outside their window. The Kims scurry to distant corners of the apartment to gain access to roving free wifi and stretch limited food supplies and their few pennies to the absolute limit. The family takes menial jobs to make ends meet, including folding a never ending pile of pizza boxes (boxes that seem to grow to dominate their flat).

At one point the camera follows the progress of the Kims as they leave the Park house and scamper, in an almost surreal series of long shots, down a never-ending parade of steps and streets, literally descending further down-and-down into the gutters of the city. It’s superb moments like this in Bong’s intricately designed film that constantly show us the divides between these people, the Parks living practically on Olympus with the Kims in Tartarus. These are problems that infect every society in the world, and the difficulty of making both rich and poor actually understand each other and find common ground to relate on are the problems we all see around us every day.

That’s even leaving aside the triumphs of Bong’s directing confidence, his mastery of tone and genre. The first half of the film is very funny – with Bong even leaning on this by having his characters drop dialogue that subtly refers to the ease with which the Kims’ plans come together – and has a delightful heist movie vibe. But the bubbling barriers between class hint at the tensions and danger that we feel lie in wait in the film, and threaten to break out. Korea is a volcano with the Kims and Parks sitting on the top, but it’s a volcano that the whole world can recognise. As Bong makes the film darker, leaner and even more menacing with hints of tragedy, it feels like the world correcting itself.

The acting is superb across the board with Song Kang-Ho hilarious and then deeply affecting as Mr Kim, a man slowly pushed beyond what he can bear. Cho Yeo-jeung is terrifically endearing and frustratingly thoughtless as the naïve Mrs Park. Park So-dam is brilliant as a super-smart Ki-jeong Kim, brilliantly manipulating left-right-and-centre. There is not a false note in the cast, the entire ensemble perfectly combining to create the class-conscious world of the film. To say too much more would be spoil it!

Bong Joon-ho’s film is Western break-through but really it’s a universal condemnation of the dangerous influence of class. And with Bong’s mastery of cinema – this is such a well directed film, both in terms of tone and every single shot contributing brilliantly to the whole – this has produced a film that feels like a very modern, prescient and profound masterpiece, a film that speaks to and almost defines the problems of the modern world. While at the same time being immensely entertaining and unpreaching. Thank goodness that 1 inch barrier came tumbling down.
Email ThisBlogThis!Share to TwitterShare to FacebookShare to Pinterest
Labels: Best Picture, Bong Joon-ho, Cho Yeo-jeung, Choi Woo-shik, Korean films, Lee Sun-kyun, Park So-dam, Social issues, Song Kang-Ho