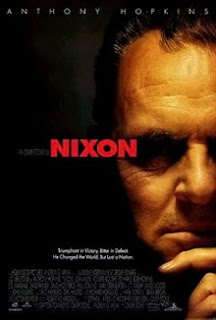 In 1995, there was one person the chronicler of the 1970s American experience, Oliver Stone, hadn’t covered: Richard M Nixon. The man who was the embodiment of the dark scar on the American consciousness, the grim, unlovable presence behind the war in Vietnam, the protests and the deep, never-ending wound of Watergate, that seemed to drag the country further and further into the abyss of self-disgust. The man who besmirched the office he had been chosen for, the least popular president ever, the national shame. With Stone’s searing attacks on everything from Vietnam policy to the conspiracies behind the Kennedy assassination, you’d expect his film on Nixon to be a condemnation. What people didn’t expect was a film as strikingly even-handed as this, which recasts Nixon not as a gloating villain, but a Shakespearean figure, a Greek tragedy of a man destroyed by chronic character flaws.

Opening with a crushed Nixon listening to his precious tapes in the bowels of the White House in his final days in office, like a drunken Gollum, the film is told in a fascinatingly non-linear style – loosely falling into two acts, cutting back and forwards in time. The first act covers most of Nixon’s career up to his winning the presidency, focusing on his Quaker childhood and the influence of his mother Hannah (Mary Steenburgen), his defeat in the 1960 election to Kennedy and his years rebuilding his political standing. The second half follows a more linear approach, covering the Nixon Presidency that becomes increasingly bogged down in the inept cover-up of Watergate and the increasingly desperate attempts to save his presidency, intermixed with his triumphs in foreign policy.

What is really striking is that Stone’s movie finds a great deal of sympathy for this troubled and complex man. He’s a man who has greatness in his grasp, dedicated, intelligent and with vision – but fatally undermined by his self-loathing, self-pity and his bubbling resentment that he does not have the love of the people. Like Lear raging against the storm, or Macbeth bemoaning the impact of his vile deeds, Stone’s Nixon becomes a sympathetic figure, even while the film makes no apologies for his crimes, his aggressive bombing of Cambodia (the film notes at its end the bombing led directly to the massacres of the Khmer Rouge) or his failures to claim any responsibility for how his own actions led to his end.

Stone’s empathetic vision of Nixon is shaped hugely by Anthony Hopkins’ titanic performance in the lead role. Hopkins makes no real effort – beyond teeth and hair – to look like Nixon, but brilliantly embodies Nixon’s awkward physicality and, above all, his angry, bitter, resentful personality. It’s not an imitation, but it totally captures him. Hopkins has got it, and the disintegration of Nixon over the course of the film into the shambling, miserable, twitching, even slightly unhinged mess he became in the final days of his presidency is astounding.

It works because Hopkins never loses sense of the potential for greatness in Nixon – sure he’s awkward (Hopkins superbly captures Nixon’s awkward grin, his stumbling nervousness in conversation), but he’s also assured, confident and clearly carries huge insight into realpolitik. His flaw is that he wants to be both the master politician and the people’s champ, to be both Nixon and JFK, to have the people cheer him to the rafters. It’s a longing that turns to resentment, that fuels insecurity and fear, that causes him to cheat and steal, to play the game, to be so afraid of being cheated that he cheats more and cheats bigger.

It’s that potential for greatness that swims through all of Stone’s masterfully made, electric film. Stone’s love for mixing film stock, fake newsreel footage, snazzy camerawork, switching colour stock, stylistically eclectic sound and music choices and bombastic lecturing comes to the fore here – and I accept it won’t be for everyone. But for me it works. It’s a big, dramatic movie because it covers an epic theme. From its early echoes of Citizen Kane – the White House as Xanadu, those missing 18 ½ minutes of the tape Nixon’s “Rosebud” – through to the accelerated pace and film stock as events spiral out of the President’s control, it’s an explosion of style that really works, even if there are points which are too on-the-nose (a scene where Nixon’s dinner talk of war is interrupted by a steak that leaks gallons of blood as he cuts into it, is clumsy in the extreme).

Stone’s theories revolve around the true villain as being the system itself, a grindingly oppressive beast that sets its own course, and chews up and spits out the men who think they can ride it. Nixon may know that it’s real, but he’s as much a victim of it as anything else. Its tendrils extend everywhere, from the creepily domineering CIA chief Helms (Sam Waterston, unsettlingly intimidating in scenes restored in the director’s cut) to the shady Texan money interests (led by an excellent Larry Hagman of all people) who sure-as-shit want to get rid of that liberal, Cuban surrender monkey Kennedy.

Nixon wants to control it, to do some good – and the film is excellent at stressing how Nixon’s poverty-filled Quaker background invested him with a drive to achieve but also chippy insecurity and moral standards from his imperious mother he can never hope to meet – but what hope does he have? In any case, his own deep moral failings doom any chance of forging his own goals, sucking him into a quagmire where long-running dirty deeds, shady deals and unedifying company consume him. “When they look at you they see what want to be. When they look at me they see what they are” Nixon complains to the painting of Kennedy, the rival whom he can never eclipse, the man born with all the advantages that Nixon never had, the millionaire embraced by the people while the working-class Nixon is reviled. It’s these resentments that consume and destroy Nixon, and Stone presents this as an epic tragedy of a great politician, crushed by his fundamentally human flaws.

Around Hopkins, Stone assembles a brilliant cast. Joan Allen is superb as Nixon’s loving but insightful wife who won’t shy to speak truth to power. James Woods is perfectly as the bullishly aggressive, fiercely loyal Haldeman. Paul Sorvino does a wonderfully arch impersonation of Kissinger, always keeping his distance. David Hyde Pierce makes a smoothly innocent but determinedly self-preserving John Dean, Powers Boothe a wonderful cold Alexander Haig. Only Bob Hoskins gives a performance slightly too broad as Hoover – but he still laces the role with a crackling menace.

Nixon is a great film, an explosion of style (perhaps at times a little too much), which painstakingly strips bare the President’s psyche – his doubt, his guilt, his bitterness, his resentments and finally his overwhelming self-pity. Powered by a titanically well-observed performance by Anthony Hopkins, who is just about perfect in every frame – every nuance of the President feels real – Nixon is a wallow in the dark underbelly of America, which hints throughout of the even greater dangers that lie under the surface, the powerful system maintaining the status quo that sees presidents come and go, but never allows any changes to affect the results it’s aiming for. It’s a remarkable film.
Email ThisBlogThis!Share to TwitterShare to FacebookShare to Pinterest
Labels: Anthony Hopkins, Bob Hoskins, David Paymer, E.G. Marshall, Ed Harris, James Woods, Joan Allen, JT Walsh, Larry Hagman, Madeline Kahn, Mary Steenburgen, Oliver Stone, Paul Sorvino, Powers Boothe, Sam Waterston