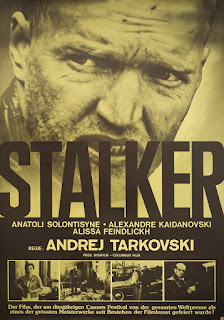 Three men stand outside a room in what looks like a rain soaked, post-industrial wasteland. They debate at great length morality, optimism, fate and destiny. They all decide not to go into the room. There really isn’t any other director like Tarkovsky is there? Perhaps that’s a good thing.

Set in an indeterminate future, Stalker takes its name from the title for guides who – through some sort of sixth sense – are able to guide travellers through “the Zone”, a fenced off area, guarded by the military, that is the site of some sort of extra-terrestrial encounter (a meterorite possibly, who knows?) that gave the Zone magical power. In the centre of the Zone is a room which will grant the innermost desires of all those who enter. Travelling with our Stalker (Alexander Kaidanovsky) are a writer (Anatoly Solonitsyn) and a professor (Nikolai Grinko). Along the journey, ideas around everything from existence to the inner soul is discussed by the three men, each of them approaching from radically different perspectives.

Tarkovsky’s style was a sort of fusing of expressionism and stately filmmaking, mixed in with his own love of extended shots. In a world of cinema where the average shot in a film lasts a few seconds, in Stalker’s 162 minutes there are only 142 shots in total. Tarkovsky’s camera pans and tracks (often slowly) through the wasteland of the Zone, finding moments of great beauty and power in the industrial mess and debris, making fabulous use of the consuming power of water as it washes over and covers everything, invading every space. Tarkovsky’s painterly structure of the film is further aided by his switching between sepia (for most of the scenes outside the Zone) and muted colours (largely for those in the Zone, with a few exceptions).

However, Stalker is also a long, slow, rather turgid film, immersive in the sense that you will feel you have lived every minute of the never-ending journey that the heroes go on. Which comes to the central problem I have with the film – and with Tarkovsky himself. The director, without a doubt, is an intellectual, straining at the leash with thoughts and ideas that he wishes to throw up into film. But Stalker is a film that suggests intellectualism, and carries all the trappings of deep thought, but in fact seems to throw ideas haphazardly at the screen with very little thought for how these hang together, or what the overall message might be (if any).

Instead we are subjected to a number of – beautifully filmed, with real artistic grace – rambling monologues that positively drip with self-importance and intellectual snobbery. Tarkovsky’s long takes and deliberate refusal to include much in the way of story, drama or character seem designed to make the film feel as much as possible like some kind of allegory. What this is an allegory of it feels Tarkovsky would consider crude to describe. Instead the film is difficult to watch and engage with, precisely because that is (it seems) what makes Great Art in the eyes of its director. When challenged by the Moscow authorities that the film was dull and slow, Tarkovsky argued it should be both duller and slower, to make those who were not of the intellectual level to engage with it leave earlier.

Perhaps he was right, as Stalker has become more and more of a critical darling, the further time gets from its first release. Now it seems almost blasphemy to look at the film and wonder if it is about anything at all. Almost a crime to suggest that Tarkovsky’s film is short on answers and easy meanings perhaps because the director himself seems to have little clue on what it is about. Perhaps to say that for all its slowness, length and rambling speeches, at the end of the day the film is making fairly safe and obvious points about the dangers of free will, the dreams for a better world and the terror that could ensue in a world where we can get exactly what we want with no cost. Stalker could be about any of this at all, or could be about nothing. Either way it doesn’t make for compelling viewing. 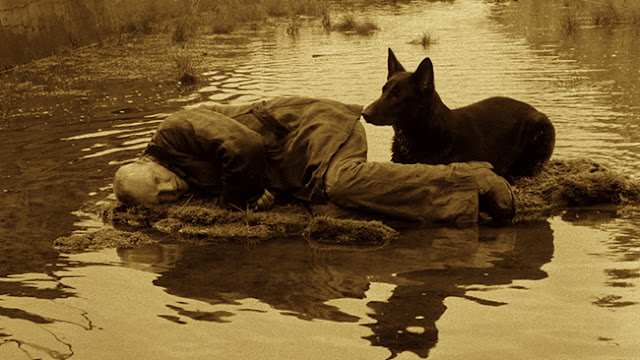 This is all why Tarkovsky for me remains an acquired taste – and not one I’ve really managed to acquire. There are moments in all his films of haunting beauty, of profound depth. But all of it is undermined by the director’s own self-importance, his pomposity, his delusions of being some sort of Plato. Above all, I find, by his own po-faced lack of humour. Is there anything amounting a joke in any Tarkovksy film? There certainly isn’t one here, and the earnest self-importance, the frowning condescension you feel behind the camera for the unworthy viewer, strangles the life out of the film and kills any feelings of fondness you might have towards it.

And there are things to admire in here. For all his pretensions at intellectualism, and the cold sense of superiority he delivers them with, it’s impossible to argue that Stalker is not a beautifully made film. The camerawork is sublime, the slow onset of water (both visually and the drips on the soundtrack) gradually dominates the action – what this is suggestive of, of course, isn’t clear but it feels like something to do with both the destructive and cleansing power of water. The film is nominally a science fiction, and moments of thoughtfulness or haunting ideas play at the edges of the film – in particular the influence the Zone may have had on the daughter of the Stalker.

Tarkovsky’s films though remain cold and deliberately hard watches, and I’m not sure there is as much reward in investing the time in them as many would have you think. Many of the points of Stalker can be grasped very quickly, and while part of the point is that they are delivered at such absurd length and languid pace, I’m not sure that is a recommendation. It’s not a film for actors either, with most of the performances largely comprising delivering slabs of poetry or cod-philosophical speeches to the camera, with scarcely a characterisation in sight.

Stalker is a puzzle deliberately written without an answer, that asks questions that should feel profound but perhaps are less revelatory than the film thinks, all within an extremely long runtime. In a cruel coda, the long time spent shooting Stalker in a pair of abandoned chemical plants would eventually lead to many of those involved – including Tarkovsky, his wife and two of the lead actors – dying of cancer within a few years of the film’s completion.

Tarkovsky is a cold intellectual, who talks of images producing feelings, but frequently produces films that feel like watching elaborate slide shows while being lectured at by a boring philosophy student. He is a master of form, but perhaps is the “Great Director” it’s easiest to disregard – or to feel like watching one of their films is more than enough. Stalker is something both unique in its execution, and painfully familiar in its Arthouse pomposity.
Email ThisBlogThis!Share to TwitterShare to FacebookShare to Pinterest
Labels: Alexander Kaidanovsky, Alisa Freindlich, Anatoly Solonitsyn, Andrei Tarkovsky, Nikolai Grinko, Russian films, Science fiction