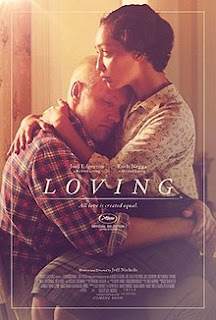 Imagine the idea of the state dictating whom you could and couldn’t marry. This was the predicament Richard and Mildred Loving found themselves in, when the appalling segregationist policies of America in the 1950s saw them arrested for the crime of a white man marrying a black woman. Over time, especially from the 60s onwards, their case was seized upon by Civil Rights movements as a possible cause celebre for repealing many of the worst excesses of laws against mixed-race marriages. But the Lovings themselves remained quiet, private and determined to lead as normal a life as possible, while others fought this battle for them in the court.

Jeff Nichols’ film is full of affection, empathy and regard for these very everyday, normal people. What it is not – for all the skill of Joel Edgerton and Ruth Negga’s performances in the leads – is a film that manages to raise any real interest at all. This is a frequently slow-moving story that manages to drain any drama out of what should be a really dramatic story.

Racial inequality is the sort of topic that desperately should be throwing up rage and anger. Imagine Spike Lee tackling this sort of content. Loving settles instead for being a polite, even rather patronising homage to the quiet lack of drive and energy in Richard Loving (in particular). The sort of film that honours his decision to, essentially, get involved as little as possible in the case, to avoid engaging as much as he can in the wider implications their legal battle has for the nation and to studiously resist any attempts to get either side involved in it.

This may be great for reality, but it’s strikingly poor drama. You feel that a drama that focused instead on those actively campaigning for the rights for equal marriage rights to be recognised, the ones who actually fought these battles in court and brought energy and fire to the debate might be a more interesting film. Instead this settles for being a film about regular, not special people, while around the edges of their lives far more interesting events and actions are constantly taking place.

There are some things to admire in the making of the film – Nichols’ brings his usual poetic skill to it – but this is a glacially paced, unabsorbing, overlong film that manages to make a scintillating and passionate subject as dull as dish water. Negga and Edgerton both do fine jobs – and clearly really admire the everyday nature of their characters – but these softly spoken, unengaged people to whom events happen, but who never take a stand of any sort of try and shape these events or set the direction of their own life, slowly switches the audience off.

Where is the fire here? Nichols’ film instead tries to become a tribute to the honesty of the working man, to Richard’s everyday values, simple, homespun viewpoints. It hails his lack of education (the film dances around where on the education spectrum Richard would be placed today), social awareness or even opinions as something which somehow makes him more “real” than anything else. This attitude, to be honest, becomes both trying and even a little patronising in its bluntness and sense of importance.

Just in case we are ever in danger of ever forgetting that he is a working man, the film can’t go longer than about five minutes without showing Richard laying some bricks. Mildred gets a little more engagement with the social issues of the 1960s – and the film does a good job of suggesting that she was a woman of considerably more hinterland than her husband, but who loyally followed his lead in the world. But neither of them come into focus as truly engaging characters. And because they are so hard to invest in, because the story and their film gives us so little personality for either of them to latch onto,  in the end you don’t get as fired up by the injustice of their case as you should do.

Instead you are left thinking at the end that this sort of racism is bad because, well, we know it was at the start. Following the story of two basically boring people who were in the right place at the right time to become the face of overturning some terrible laws, doesn’t make them interesting and doesn’t make a story that focuses on their lives at the cost of any of the wider issues or actual battles that were being fought, suddenly interesting either.
Email ThisBlogThis!Share to TwitterShare to FacebookShare to Pinterest
Labels: Bill Camp, Biography, Jeff Nichols, Joel Edgerton, Marton Csorkas, Michael Shannon, Nick Kroll, Ruth Negga, Social issues