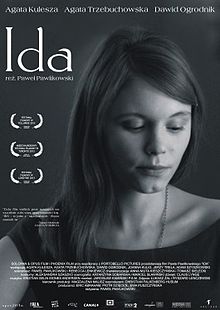 We are lucky. Growing up in a Western country, free of conquest and suppression, we don’t have the past weighing on every breath and step of our lives. But travel to other parts of Europe and you will find that the past is as unspokenly present in every moment as the present is, and that the two practically coexist side-by-side. Poland in the 1960s was such a country – a land so weighed down by the horrors it had seen throughout the century that there is no need for them to be given a name.

Anna (Agata Trzebuchowska) is a young novice nun told by her prioress that before she can take her vows she must meet with her aunt, Wanda Gruz (Agata Kulesza), a last surviving relative she had never even heard of until that day. Visiting Wanda, Anna is shocked to discover that Anna’s real name is Ida and that she is the daughter of Jewish parents murdered during the Second World War. Wanda, a resistance fighter during the war, later became a feared State Prosecutor but is now a judge struggling with unspoken guilt and succumbing frequently to alcoholism and one-night stands. Together Wanda and Ida travel to try and trace what exactly happened to Ida’s parents – discovering profound truths about themselves and their country as they travel.

Pawlikowski, a Polish director who grew up in London, directs his first Polish language film – and I think it’s fair to say he has produced a small-scale masterpiece here. Shot in beautiful black-and-white – a sublime choice for the chilling weight of the past that hangs over every shot of this film – Pawlikowski’s film is a lean, trim, perfectly weighted 78 minutes that covers more thematic depth and richness than films three times its length. It’s done with a beautifully low-key, quiet power that gives you plenty to richly mull over.

Its genius is capturing the weight of the past and the impact that it has at both a personal and a national level. So traumatic is the past of Poland that words like Holocaust and Stalinism need not be mentioned – over the course of a decade, millions of Poles (many of them Jews) were killed by Nazis, Soviet police and other Poles. This is a country lying deep in a post-traumatic haze, guilt, fear and sorrow the base below many social interactions. Pawlikowski captures all this beautifully, the oppressive gloom of sadness lying across every single frame.

There is no demand for retribution and apology – and the one moment of guilty confession is beautifully underplayed and affecting for its relative lack of reaction from the witnesses – and the past is not expressed as an evil secret. Rather, people – good and bad – are shown as just people, many of them acting out of fear, or for what they felt was best, or ignorance. There is no easy viciousness and evil in the past, just the sad facts of life. The film’s atmosphere is coated in the horrors of the past, but lives roundly in the present. There are few – if any – dramatic moments of tears, recriminations and accusations. Instead the pressure of the past is met with sad, reflective shame and weary acceptance of the impossibility of going back.

Every shot is carefully chosen to reflect this theme. Pawlikowski frequently shoots Ida and Wanda just off centre of the frame, or even low down in the frame, allowing much of the shot to frequently be filled with the architecture and nature of Poland – much of both, rundown, crumbling, cold and bleak. The old “academy” ratio of 4:3 works perfectly for this look, old-fashioned but also boxed in. Not a single shot is wasted or overlong, and each of them serves a perfect purpose. Pawlikowski uses the structure of the road movie to serve itself as a semi-voyage into the past of Poland, as well as brilliantly allowing for the emotional expansion of its lead characters.

Both these leads are beautifully played by the two leads. Agata Trzebuchowska, a non-actor (now a journalist and film director herself) was plucked from almost nowhere in the Polish film industry to play Ida (she accepted due to her love for Pawlikowski’s film My Summer of Love) and she is perfectly suited to the role, investing Ida with a certainty from the start that slowly adapts and adjusts as she learns more and more about both her own past and her country’s.

Agata Kulesza is extraordinarily good as Wanda, whose intense feelings of guilt at the many mistakes she feels were made in her past consume every thought, but who presents to the world a bullish confidence and freedom of expression. Her underlying vulnerability is what allows Ida in – and what will fundamentally change her outlook on the world, and both give expression to and dominate her melancholy.

Both these characters are shifted and changed forever by their joint exploration of the seemingly simple facts of their background – and the idea of continuing life in a world after this seems impossible. But Pawlikowski’s film doesn’t seem without hope. There is another generation coming to Poland – represented by a jazz band, led by Lis (Dawid Ogrodnik), a hitchhiker they pick up – and for these, the past seems just that. It’s not an everyday presence that haunts their decisions, or hangs over their life, and for this generation coming “life as usual” seems not a burden but an accepted fact. Is this a good or a bad thing? Maybe both, but it at least shows that that the country has some hope of moving on and forging a future even while the scars of the past remain.
Email ThisBlogThis!Share to TwitterShare to FacebookShare to Pinterest
Labels: Agata Kulesza, Agata Trzebuchowska, Cold War, Dawid Ogrodnik, Joanna Kulig, Paweł Pawlikowski, Polish films