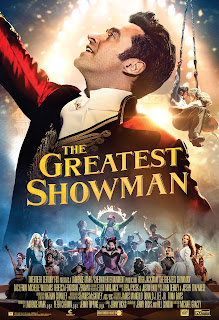 In early 2018, the whole world seemed to go crazy for The Greatest Showman. A big old-fashioned film musical that wouldn’t look out of place with Gene Kelly in the lead, people went to the cinema again and again to see this escapist song-and-dance epic. Based loosely on the life of PT Barnum (Hugh Jackman), covering his marriage to childhood love Charity (Michelle Williams) and the creation of his Museum of Curiosities (funded through some chicanery with banks), he staffs the museum with “freaks” whom he encourages to embrace their nature and entertain the crowds. The “circus” is a huge success, but will Barnum be seduced by his desire for greater fame and acceptance in the cultural high circles that have no time for his mass entertainment? And how will his fascination with opera singer Jennie Lind (Rebecca Ferguson) affect his marriage?

If you get the idea from that plot summary that this is rather safe and unchallenging plot-wise, you would be right. Structurally this doesn’t offer anything more than hundreds of musicals before it – a hero aims for the stars, loses his roots on the way, only to triumphantly rediscover them and remember why he got into this business in the first place. Yup that’s your classic Hollywood plot here. And it doesn’t matter a damn.

Because The Greatest Showman, like the shows Barnum offered the crowds, knows exactly what it is: an old-fashioned Hollywood musical, shot like a classic piece of Broadway spectacle, crammed to the gills with hugely exciting and dynamic musicals performers ripping through a series of impressive songs and some stunningly choreographed numbers. Who gives a damn if you’ve seen the story before, when it’s so well done, the actors so engaging and the highlights on the way to brilliant to watch. Come to this with your mind set for the West End, and you’ll love it. Expect to see La La Land and you are in for a disappointment (or a pleasant surprise!)

Gracey’s film is unashamedly old-fashioned, and shot with a confident stillness that puts the actors, dancers and singers front-and-centre rather than the flourishes of a director. In contrast to some over-directed musical numbers, Gracey is happy to place the camera so we can see all the numbers perfectly. And why wouldn’t he when all the actors can dance as well as this? I want to see every step of the intricate choreography (that would have thrilled Kelly) from Jackman and Efron in The Other Side. I want to see every step of the thrilling group dance number From Now On. I want to marvel at Efron and Zendaya soaring through the skies on trapeze ropes in Rewrite the Stars.

It’s a musical that chose its cast carefully, requiring that they should all be capable of the sort of feats of physical and musical perfection that we all enjoy watching on Strictly every week. In all this, the snubs of the critics seems neither here nor there – hilariously the film always commentates on its own terrible reviews in advance (!) in the character of James Gordon Bennett, a humourless snobby theatre reviewer – it’s a film that is shot in the arm of pure entertainment.

I mean you’d need to have a heart of pure cold not to feel some serious emotions during Jackman and Williams’ beautiful rooftop ballet during A Million Dreams. What I particularly liked about this was its unabashed, carefully designed artificiality – like a blast of 1950s Minnelli musicals, this uses painted backdrops and studio locations to beautiful effect to create a larger-than-life, theatrical world of hyper reality. It really helps you to get even more swept up by it all.

But then you also get swept up from having an actor as charismatic as Hugh Jackman in the lead. Oozing charm and grace from every pore, Jackman is riveting in the role, his grin a mile wide, his skills as a singer and (most especially) a dancer shown off to stunning effect. He turns moments that could have rogueish qualities into sweetness, he is impossible not to root for. Sure as an actor he’s not stretched with the conventional arc Barnum has, but does that matter when he is giving this all he has. It’s a hugely, overwhelmingly enjoyable performance of pure charisma that I can’t imagine any other actor in Hollywood having the chutzpah to pull off. It’s so skilled that he never overwhelms the film but you could move the whole performance into a 1,000-seater theatre and it would still work perfectly.

The rest of the cast all lift their considerable game to match the commitment and expertise of the lead. Williams showcases her own musical talents, while Efron and Zendaya have a truly affecting romance at the heart of the film (while also being considerably compelling musical performers). Rebecca Ferguson has the least rewarding role (and is also dubbed for the high soprano singing), but does a decent job as someone you could imagine turning Barnum’s head. The rest of the cast playing assorted circus performers create a truly family atmosphere, with Keala Settle and Sam Humphrey particularly fine.

You could argue that the film – with its message of acceptance and lack of judgement – flies a little bit in the face of the real Barnum (“there’s a sucker born every minute”) who probably was partly exploiting his acts for cash. The treatment of Jennie Lind as an increasingly scheming would-be-seductress is a sad slur on a woman who gave most of her earnings to charity. In fact you wish all the names had been changed to distance us from reality.

But the film gets away with it because it is basically a heartfelt and genuine piece of work that, most of all, like a huge Broadway musical just wants to entertain the audience. And on that score it works – you’ll get invested in the characters and their story and you’ll find yourself humming the songs afterwards and trying (failing) to dance those steps. Go into it in the right mindset, and you’ll find a delight.
Email ThisBlogThis!Share to TwitterShare to FacebookShare to Pinterest
Labels: Hugh Jackman, Keala Settle, Michael Gracey, Michelle Williams, Musicals, Rebecca Ferguson, Zac Efron, Zendaya