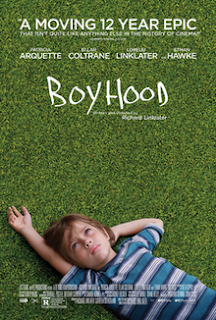 If there is one thing we can all relate to, it’s the trials and tribulations of growing up, that shift from being a child to an adult. It’s the subject of Richard Linklater’s film Boyhood, which follows the growing up of Mason Evans (Ellar Coltrane) from the age of 6 to 18 and his relationship with his divorced parents Olivia (Patricia Arquette) and Mason (Ethan Hawke) and his sister Samantha (Lorelei Linklater). What is however most striking about Linklater’s film is that it was shot over a staggering period of time, 12 years in fact, meaning that Ellar Coltrane and Lorelei Linklater literally grow up on screen before our eyes.

It makes for an almost unrepeatable power over any other film dealing with the same subject, by letting all the actors naturally grow older over the length of the film. Suddenly it becomes not just a film dealing with an idea, but instead a real life dramatization of the process of ageing, becoming some sort of emotional scrap-book or album, a type of film version of the trick of making a drawing move by quickly flicking the pages of a notebook. It adds an air of depth and reality to the whole film that gives it a universal strength and appeal. It’s an actual slice of real life, it’s unrepeatable and profoundly well done and immersive.

Linklater was given near creative freedom to shoot the film – with the small yearly budget for shooting the film being squirrelled away into various studio accounts. Linklater creates a film with a lack of actual drama that makes it feel even more like a part of life. There are precious few “narrative points” or dramatic tools in the overall film, with the exception maybe of Olivia’s hard drinking second husband Marco (Bill Welbrock). Instead, the issues that Mason (and Samantha) deal with have a universal relevance. These are the sort of events – the sort of conversations – that any child could have growing up. Far from making the film dull, this serves to increase its power.

Linklater based each year’s filming script on the events and feelings that were going on in the life of Ellar Coltrane at the time (although he had a clear idea of the final scene and shot), which perhaps also helped to draw such a series of deeply felt and real performances from Coltrane. The intimacy of the story also brilliantly makes each scene feel engrossingly real, precisely because everything is grounded in reality and nothing in some sort of overarching film narrative.

It’s a film entirely about capturing the rhythms and beats of real life and Linklater’s style allows moments of spontaneity, of naturalness and reality. Nothing in the film ever feels forced. You could argue that it also leads to a film that is almost restrainingly unambitious – it’s about as grounded as you can get, and barely has a structure as such at all beyond time passing. But that would be to miss the point – and the very fact that the film ignores virtually all the clichés of filmmaking narrative and storytelling is something to be praised than to be criticised.

The film works so well due to the commitment of all involved, not least Arquette and Hawke as the parents. Arquette won nearly every award going (including the Oscar) as the mother, and her performance is a testament to the film’s strengths. It totally eschews the loud moments of acting, the look-at-me Oscar bait that the role could have had, to instead focus on a quiet, sad dignity – but also warmth and loving regard for her children. There is no studied pretence to the role at all, but instead Arquette seems to play instead the moments of joy, tinged with disappointment at moments and chances lost from early motherhood, that you can imagine everyone feeling. It’s a bravely real performance, stuffed with moments of searing, heartfelt emotional truth.

Hawke is just as good as the father, a man who slowly comes to terms with his own responsibilities and adulthood over the course of the film. Starting as still something of a would-be beatnik and playboy, we see him slowly – especially after a second marriage – grow up and accept the role of an adult and a parent, while still clinging to the idea of dispensing fatherly/brotherly wisdom to his son.
If Linklater’s film does have a flaw it’s on this focus of father-son. There really was nothing to stop this from being Childhood rather than Boyhood, but instead it’s the story of the son (and with a particular stress on his bond with his absent father) that is at the heart of the film. It’s perhaps reflecting the angle that Linklater himself bought to the story, but its shame the film doesn’t try and be more even handed by allowing us to get a greater sense of how time and childhood affected both Mason and Samantha, rather than filtering Samantha’s experience through Mason’s perspective. It also means that Mason’s relationship with his mother is downplayed in favour of the bond between father and son, a general preoccupation with male relationships that runs through the film.
It’s a minor flaw I suppose, more of a missed opportunity – and less tasteless than a clumsy sequence where Oliva inadvertently motivates a Mexican immigrant to change his life, something he is profoundly grateful for years later but which she seems uncomfortably unaware of – but then this is a film that gets so much else right. Linklater’s live-action time-lapse film is a work of art that is probably unrepeatable, and is so low-key and normal that it carries a force and relevance few other films can.
Email ThisBlogThis!Share to TwitterShare to FacebookShare to Pinterest
Labels: Ethan Hawke, Family drama, Patricia Arquette, Richard Linklater