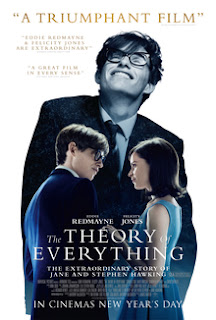 If you want a story of a triumph over adversity, there are few where adversity was faced off so successfully and publicly than the life of Stephen Hawking. Diagnosed with motor-neurone disease while still a postgraduate, Hawing defied the diagnosis that gave him little more than a few years to live, to shape a life and career that would have a profound impact on the world and make him probably the most famous scientist alive. Not bad for a man who spent a large part of his life confined to a wheelchair, only able to communicate through a synthesised computer voice.

But his life was not just a story where he was the only character. Many of his accomplishments came about because of the unflagging support of his wife Jane. This film takes as its source the book Jane wrote about their life together. And while it arguably sugar-coats or plays down some of the more uncomfortable or divisive elements of their marriage (a marriage that was eventually to end in divorce and several years where they did not speak), it also serves as a warm tribute to the many years they spent together where their support for each other was total and offered with no agenda or demands.

Here in James Marsh’s inventive and well-made film, which manages to more-or-less transcend its “movie of the week” roots, Hawking and Jane are played by Eddie Redmayne and Felicity Jones in performances that scooped an Oscar and a nomination respectively. Both are deserved, as these are rich, dedicated and empathetic performances, crammed with admiration for their subjects. It all fits perfectly well in Marsh’s moving if (at times) rather conventional film, which he directs with a lack of flash and plenty of heart.

It’s a film that sometimes avoids delving too deeply into the emotional heartlands of its lead characters, and the frequently messy situations that life throws you into (the end of this relationship comes with a remarkably calm sadness, which contrasts heavily with the furious argument Jane describes in her book). It’s also a film that has a very clear agenda of framing Jane as a near saint in her devotion and patience, and Stephen as a brave soul with a superhuman perseverance and regard for his wife. So the introduction of choir leader Jonathan Jones (played with a sweet charm by Charlie Cox) into their domestic life as a surrogate father to the Hawking children and friend to Jane (very definitely not a lover, the film is eager to make clear) is very much something accepted by both without a hint of doubt or recrimination. Similarly, Hawking’s later divorce of Jane is set in a context of “setting her free” rather than the more (allegedly) definitive break it was in real life.

Real life, you suspect, was messier than this. The film does mine some excellent emotional honesty from Jane’s decision to marry Stephen being, at least partly, based on her belief that this man she loves only has a few years to live. From the start she doesn’t anticipate signing up for a lifetime of providing care and abandoning her own aspirations to support Stephen’s (the film makes no real mention of her own dreams of becoming a translator) – but Jane does so with a decided willingness and sense of duty. Similarly, Stephen does not anticipate a life essentially trapped in a wheelchair – finally speechless – and the film allows beats of frustration from him, alongside the determination to not let these problems prevent him from achieving his potential. 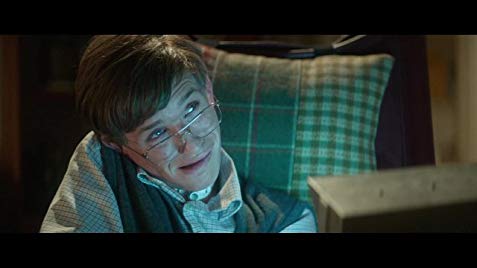 The film revolves around Eddie Redmayne’s performance as Hawking. Needless to say it’s a technical marvel, a stunning accomplishment not only in its physical mastery (especially as it was all shot out of sequence, so in each scene Redmayne needed to carefully map how far the symptoms had progressed) and commitment, but also in its searing emotionality. Hawking’s brightness, his bashful playfulness, his intelligence and sense of cheeky charm are all there – and they’re later married with a pained, just-controlled bitterness mixed with stern mouthed resentment and gutsy determination to deal with the hand he has been given. Redmayne’s performance is a superb capturing of the all-consuming feelings of being betrayed by your own body, of no longer being the master of your own frame and being forced to adjust your plans and expectations to meet the limits nature has put on you.

Felicity Jones is equally good in a superbly heartfelt performance as Jane, a woman who gifts Stephen the determination and will to see past the limits the disease places on him. But it’s also a performance that acknowledges the draining burden of having to support someone this ill, of having to constantly be the strong member of the marriage, the one who must always be as ready to save her husband from choking at dinner as she must be to drop everything and fly across Europe to take life-saving medical decisions about him. Jones’ performance never slips into self-pity, but mines a rich vein of willing sacrifice powered by love.

Marsh’s film is largely unflinching around the everyday miseries and sorrow of the terminally ill and restrictingly disabled. We are confronted in every scene with the limits that Hawking’s body places upon him, from deteriorating handwriting and clumsiness to the loss of all speech and movement. This progression is presented with a detail uncoloured by maudlin sentimentality. Doctors are sympathetic but bluntly clear about the dangers and risks of treatment, each adversity is met with a quiet determination to carry on.

The Theory of Everything is a heart-warming watch – and features two superb performances. The portrait of a marriage that works, for the most part of their lives together, despite all obstacles is inspiring. While the film glosses over well-publicised issues over the end of the relationship – and perhaps downplays the emotional strains on both towards its end – it still succeeds in making a largely unsentimental picture of a genius who overcame all, and the brave woman who gave him the dedication he needed to do it.
Email ThisBlogThis!Share to TwitterShare to FacebookShare to Pinterest
Labels: Biography, Charlie Cox, Christian McKay, David Thewlis, Eddie Redmayne, Emily Watson, Felicity Jones, Harry Lloyd, James Marsh, Maxine Peake, Simon McBurney