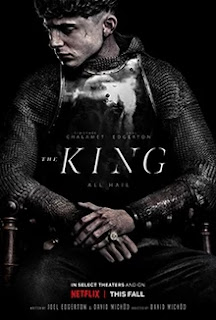 This is a story that is pretty familiar to most people now – after all, Shakespeare’s play has probably been being played somewhere in the world for most of the last 500 years. Edgerton and Michôd collaborated on the story and script of this restaging, or reimagining, of Shakespeare’s epic of the wayward fun-loving prince turned hardened warrior king. Despite being handsomely filmed, and impressively shot, this makes for an odd and unusual film which falls between the two stools, as it is faithful to neither history nor the Shakespeare original.

The rough concept remains the same. Prince Hal (Timothée Chalamet) is not just a young man who has fun in the taverns of London, he’s also quite forward looking in his attitudes, and just can’t understand why he should be made to carry on the rivalries of his father, the fearsome Henry IV (a broodingly miffed Ben Mendelsohn) or why he should continue the wars that the council pressures him into. When he becomes king, however, Henry is persuaded by his counsellor William Gascoigne (Sean Harris), that the path to peace for the realm – and safety for his subjects – can only be through unifying the kingdom by war with France. Appointing the only man he trusts – his old drinking companion and famed soldier Sir John Falstaff (Joel Edgerton) – as the Marshal of his armies, Henry heads to France where destiny awaits.

Michôd’s film is at its strongest when it focuses on the visuals and the aesthetic of its age. It’s beautifully shot, with several striking images, from execution courtyards to the battle of Agincourt itself, which takes place in an increasingly grimy field. The battle itself ends up feeling more than a little reminiscent of ideas from Game of Thrones – in fact a few core images are straight rip-offs from the famous “Battle of the Bastards” episode – but it at least looks good, even if there are few things new in it. The costumes and production design don’t feel like they strike a wrong note either with the grimy, lived-in feel.

More of the issues come around the script. The film’s concept of Henry initially as this rather woke modern king – he just wants peace and to give up these tiresome obsessive conflicts of his father – who slowly becomes more colder and ruthless as the film progresses does at least make thematic sense in the film, but it still rings a little untrue. Much as I would like, it’s hard to believe that any prince like this could ever have existed at the time, and so cool and calculating is Chalamet’s performance from the first that he never feels like a genuine, young, naïve princeling whom we can sympathise with early on.

It makes the film’s arc rather cold, and Hal an even more unknowable character than the film perhaps even intends. There is very little warmth or genuine friendship between Hal and Falstaff, and Hal moves so quickly to the imagining (and enacting) of war crimes during his time in France that his descent towards potential tyrant feels far too sharp to carry impact. Even in the early days of his reign he’s swift to have potential destablisers in his court executed with no mercy. Where is the fall, if he is such a cold fish to start with? And with Chalamet at his most restrained (like the royal baggage and the accent are a straight-jacket around him), how can an audience invest in him?

And what are we supposed to be making of this anyway, since the film is at equal pains to suggest that the king may be the subject of manipulation and lies that force his hand into war? This Henry, we learn, values truth and honesty highest – but this doesn’t stop him getting pissed when met with counter-arguments from his advisors (even Falstaff) or reacting with cold fury and disavowal when things don’t go his way. It’s a confusing attempt to add an ill-fitting modern morality to a king who essentially in real life spent most of his life at war, and was to die on campaign in France still trying to cement his rights at a young age.

Edgerton and Michôd’s script fails to really square this circle, and all the attempts to have its cake and eat it (the peace loving king still manages to kick arse, including killing Hotspur in single combat thus averting the Battle of Shrewsbury from ever happening) don’t quite pan out. Edgerton writes himself a decent role as Sir John Falstaff, here reimagined as a million miles from the drunken, cowardly knight into a courageous and hardened soldier who has no time for the compromises and deceit of court (in contrast to Henry’s other advisor, the Machiavellian Gascoigne played with a playful archness by Sean Harris). Making Falstaff a respected figure like this rather flies in the face of the logic of why Henry IV is so annoyed about his son spending time with him, but never mind.

It’s not really Shakespeare and it’s not really history. It sticks closest perhaps to Shakespeare in its portrayal of the French as arrogant fops – led by Robert Pattinson going delightfully OTT as the Dauphin – but it never really quite works out what it wants to be. With its Game of Thrones look and feel, and prince who is both great warrior and reluctant warlord, peace-lover and ruthless executor of his enemies, it feels scattergun and confused rather than coherent and whole.
Email ThisBlogThis!Share to TwitterShare to FacebookShare to Pinterest
Labels: Ben Mendelsohn, David Michôd, Dean-Charles Chapman, Historical epics, Joel Edgerton, Robert Pattinson, Sean Harris, Thomasin McKenzie, Timothée Chalamet