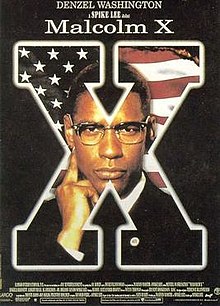 In the early 1990s, Norman Jewison was attached to direct a biopic of Malcolm X, the powerful African-American activist, tragically assassinated in 1965. It was the project of Spike Lee’s dreams – and Jewison conceded he did not have the vision for the film that Lee clearly had. Lee stepped in – and thank goodness, as this is perhaps a film only he could have made. It splices together Lee’s customary political savvy and (accurate) sense of the injustice Black Americans have faced with a surprisingly adept use of the cinematic language of David Lean and other sweeping epics. In bringing these together, he created a superb biography, a great piece of epic cinema and a vital piece of American film-making.

The film covers the life of Malcolm X in three clear stages. Firstly his young days as a tearaway in Harlem, with drug addiction and crime, all with best friend Shorty (Spike Lee), a local gangster whom he admires (Delroy Lindo) and white girlfriend Sophia (Kate Vernon). The second act is his conversion to Islam under the guidance of (fictional) Brother Baines (Albert Hall) and his rise as an incendiary speaker with the Nation of Islam under the influence of its leader Elijah Muhammad (Al Freeman Jnr). The final act covers his disillusionment and departure from that organisation after a host of scandals and political disagreements, his pilgrimage to Mecca and his return looking to work with other civil rights movements before his assassination by former members of the Nation of Islam.

It’s hard to know whose film to call this, because Spike Lee and Denzel Washington both invest this film with so much passion, director and actor working in perfect synchronicity, that it’s impossible to imagine the film without one or other of them. Washington’s performance is quite simply extraordinary. He spent over a year of focused preparation on the film, and every pore of his body seems to have soaked in the mood, manners and attitudes of Malcolm X. It’s a transformative performance of purest emotional commitment: impassioned, empowering and enthralling, charismatic in the extreme. He never shies away from the anger and the faults of Malcolm X, but so engrossingly human is his work that he brings to life in a way few people had before Malcolm’s humanity, his generosity, his love, his decency. It’s a performance that seems to have transformed the actor into the man and the film works so well because Washington completely involves you in his story.

Washington should have won the Oscar that year – it went instead to Al Pacino – and Malcolm X also should have been nominated for Best Picture and Best Director, far more so than Scent of a Woman nominated in both categories. It’s a film that builds its audience’s empathy so successfully with its lead character, and so clearly understands what Malcolm was trying to do, that you come away from it full of respect and admiration for the man. Even when the film was made, many people saw Malcolm X as a divisive, even dangerous figure – but watching the film you forget that and invest in him as a man.

It’s also inarguable – as n-words and racial bias from many whites in the film litter the screen – that it opened the eyes of many people as to exactly how harsh living in America was at the time if you were black. Put simply, it was a country labouring constantly under injustice, persecution and suffering where a black life was worth less than a white one. It’s a theme that Lee has returned to time and again in his work – and quite rightly – and it’s the sort of masterclass of simmering political anger that powers the best of his work. Would any other director under the sun have chosen to open this film with footage of the Rodney King beating? Would anyone else have thought of ending it with a coda in South Africa, as Nelson Mandela (yes the real Nelson Mandela) addresses a classroom full of children about the importance and power of Malcolm’s vision of black people taking pride in themselves and their heritage – a pride beaten out of them still today, as Lee’s Rodney King footage shows. 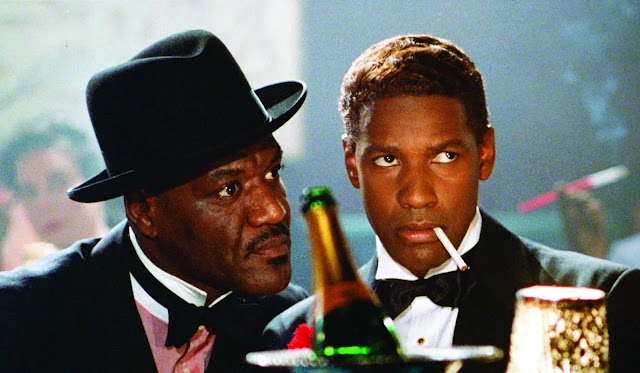 Lee’s direction is quite simply superb, a wonderful fusion of his own styles with a classical sweep of David Lean, spiced with the textual play of Oliver Stone. The photography from Ernest Dickerson is wonderful, the film is beautifully cut and assembled and the recreation of period detail from set to costume is remarkable. Lee’s style is sublime, from a riotously fun Harlem song and dance routine (really impressive) with Malcolm others dancing a superb Lindy Hop, to the harshness of prison, through to the intelligent and acute analysis of growing divisions in the Nation of Islam (Al Freeman Jnr is fabulous as Elijah Muhammed) and Malcolm’s developing political stance.

Lee’s film is even-handed on the whole – Malcolm’s real opponents are ideological disagreements, the film dramatizes a moment Malcolm considered a great regret where he rudely brushed aside a white college student keen to help his cause, and the film makes a lot of play over his controversial opinions on Kennedy’s assassination (essentially that he deserved it). But it also builds a superb sense of Malcolm’s personal life alongside, and the film is crammed with moments of quiet intimacy and a wonderfully developed performance of supportive love from Angela Bassett as Betty.

But the Lee touch is in that sense of anger. The politics and fury of Malcolm’s speeches and his message to black people today to save themselves and find pride in themselves carry through the whole film. Lee was sick and tired of the “white saviour” film and he triumphantly made here a film that was by black people, about black people but had something for all to hear. Malcolm X is a superb piece of biography cinema that leaves you with justifiable admiration for a man it’s easy to misjudge, engrosses you in a complex and disturbing era, angers you at racism and its impact, and also leaves you entertained. In many ways the most classical of Lee’s films – but a reminder that he is a unique and compelling voice. He thought he was the only one that could tell this story. He was right.
Email ThisBlogThis!Share to TwitterShare to FacebookShare to Pinterest
Labels: Al Freeman Jnr, Albert Hall, Angela Bassett, Biography, Christopher Plummer, Delroy Lindo, Denzel Washington, Spike Lee