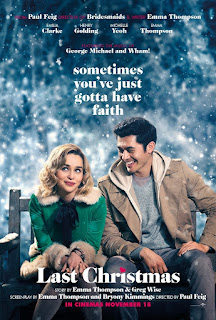 Last Christmas has been savaged by critics and held up by many like it was some sort of embodiment of everything that’s wrong with cinema. Jeez louise guys, take a chill pill why don’t you? Feig’s London based comedy, working with an Emma Thompson script, does exactly what it says on the tin – an It’s a Wonderful Life-inspired Christmassy story, that ticks all the Christmas boxes. It has no pretentions for doing anything else. And there is nothing wrong with that!

Kate (Emilia Clarke) is recovering from a heart transplant last year, and she’s heading off the rails. She takes no responsibility for anything, she’s selfish, lazy, demanding and making a car-crash of her life and health. Working as a full-time Elf in a Covent Garden Christmas store (run by Michelle Yeoh as “Santa”), Kate’s life is heading down the toilet until one day she meets Tom Webster (Henry Golding), an almost supernaturally decent guy, kind, considerate, friendly and caring. With his guidance can Kate start to turn her life around?

Well there is a twist in Last Christmas and, to be honest, it’s pretty easy to see coming. Anyone with half an eye on costumes or numbers of interactions will see it coming and anticipate what they are going to get. But you know, that’s fine. This is a film that knows what it is, a fairly unchallenging rom-com that’s spiced with a little touch of Capra-esque whimsy and a conventional morality tale of a selfish person turning round their life.

There are some good jokes, there are some reasonably charming performances, there is a good sense of fun driving through the whole film and it manages to capture at least a little touch of that Christmas-movie alchemy (a la Love Actually) where you can imagine people happily sitting down to watch it, in a light, fun, unchallenging way, for years to come. Its Feig’s offering for the Christmas movie cannon and it’s a perfectly acceptable entry. In fact its cosy predictability and familiar structure is pretty much a key part of its appeal. Because at Christmastime we don’t really want anything that’s going to stretch us or demand things from us. We kind of want to sit around and watch something a little predictable, a little fluffy but basically well-meaning and fun.

Emilia Clarke does a terrific job as light comedienne in the lead role, a role perhaps far more suited to her quirky, klutzy, off-the-wall charm than years of playing Daenerys Targaryen on Game of Thrones ever was. She throws herself into it here, happy to be silly, and shows both a good skill for pratfalls and also for drawing out a vulnerability from her character as well as being extremely charming. Henry Goulding makes a very good match as a character who could very easily tip over into smugly perfect, but again remains just the right side of charming.

Thompson writes herself a decent role as Kate’s Yugoslavian mother, a typical sort of nightmare domineering mother from films of this time, but laced with a sadness and isolation in the modern world and her adopted country. Moments that show the reaction of the characters to Brexit and the growing hostility to immigrants sometimes lean a little too heavily on the liberal conscience of the audience, but it fits in with the generally gentle, liberal attitudes of the film.

It’s a film that knows it’s a guilty pleasure, but it seems to have been designed to give you a sort of pre-Christmas glow. Catch it in the wrong mood and you will consider it one of the worst things you have seen. Take it in the right mood and you might even be charmed by it.
Email ThisBlogThis!Share to TwitterShare to FacebookShare to Pinterest
Labels: Christmas movies, Emilia Clarke, Emma Thompson, Henry Golding, Michelle Yeoh, Paul Feig, Romantic comedy