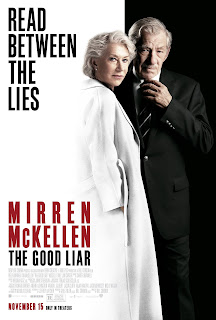 The truth can be a difficult thing to grasp. Particularly when so many people are skilled at twisting and turning it for their own purposes. Roy Courtnay (Ian McKellen) is one of the best in the business, a selfish and greedy con man who preys on the vulnerable and the arrogant unlike, ruthless in is business dealings and with anyone who tries to muscle in on his business. His latest mark is Betty McLeish (Helen Mirren), a lonely widow who has inherited a huge fortune from her late husband. Meeting Betty through a “lonely hearts” online dating agency, Roy skilfully inveigles his way into her life and her home. But is all as it seems to Roy?

The Good Liar is an entertaining and enjoyable con trick of a film, that sets up its stall very much like a number of other films in this genre. We are presented with a picture of the conman at work, and shown many of the tricks and hoodwinks that the film will practice on us, being worked out in practice by the conman early in the film. It’s possible to see how the joins work – and do find your expectations being carefully prepped – but the film is entertaining enough that you are happy for it to let you try and lead you down the deceptive garden path even as it points out a few trips along the way.

A large part of the success is down to the brilliance of the two leading performances. Ian McKellen is at possibly his very best as the genial, amusing, waspish Roy who we only slowly begin to realise is a thoroughly nasty piece of work, with a line in casual cruelty and violence. It takes a great actor like McKellen, to play so successfully a consummate actor (and liar) as Roy, and never seem either too forced or overplaying the hand. His Roy has several excellent lines, and also a brilliant ability to look and sound genuine and heartfelt at one moment and shift gears to ruthless coldness the next. It’s a superb performance, wonderfully entertaining in its delight in its own villainy. You almost want to forgive Roy his essential vileness, such is his surface charm and McKellen’s waspish delight in playing such an unrepentantly horrible man. McKellen has done his best film work working with Condon and this film might be his best yet.

Mirren matches him well as the mark, a considerate, intelligent and decent woman. Mirren has a difficult job here, for reasons that would perhaps be spoilers, although I think it is safe to say that most viewers going into a film like this would expect that it would have a few cards up its sleeves. Needless to say Mirren is perhaps not all she seems, but she handles the difficult balancing act of seeming one thing and suggesting enough of another, that the final reveals never come as a surprise or seem inconsistent with her characterisation throughout the film.

Instead the film takes us on a delightful dance where we know that something is going on that we don’t know about or can’t see – and playfully the film effectively shows us the mechanisms of the con very early on as Roy and his business partner Vincent (an excellent Jim Carter) carry out another confidence game on some other victims. But Condon’s playful film lets us know enough that something is happening that Roy can’t even begin to guess at, while also allowing us to enjoy his confidence, arrogance and fast-thinking willingness to dance from lie to lie depending on the mood.

The one problem the film might have is that the final reveal of what is going on is based on information that is not delivered early in the film, but instead dropped on us at the end in an info-dump. While it makes sense that the film wishes to play its cards close to its chest, it perhaps would have been more satisfying to have little bit more of the information sprinkled throughout the film, enough for us to have a bit of a chance of piecing together they why before we are told. On reflection the film gives us moments that point towards the big picture, even if never enough information is given.

But the film still works because it has a devilish charm and waspish wit, and a delightful performance of gleeful devilry from McKellen, in one of his best roles yet. Making a superb pairing with Mirren, Condon’s enjoyable film hinges on the success of its actors and its enjoyment of the tricky narrative sleight-of-hand that con films can do so well.
Email ThisBlogThis!Share to TwitterShare to FacebookShare to Pinterest
Labels: Bill Condon, Crime drama, Helen Mirren, Ian McKellen, Jim Carter, Lucian Msamati, Russell Tovey