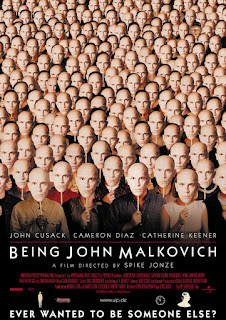 Is there a more consciously eccentric film ever made than Being John Malkovich? Can you imagine the pitch to the Hollywood suits?

Our hero, Craig Schwartz (John Cusack) is a weedy, bitter puppeteer (as well as creep and potential stalker), whose wife Lotte (Cameron Diaz) fills their house with rescue animals, from talkative parrots to a chimp with PTSD. Needing to make ends meet, Schwartz takes a filing job at a company based on floor 7½ of an office block (it’s a low ceilinged floor built between the other two floors – it’s cheaper on the rent obviously) where he becomes obsessed with his sexy co-worker Maxine Lund (Catherine Keener), who is resolutely not interested. But all this changes one day when Schwartz finds a fleshy, dark tunnel behind a filming cabinet that takes someone into the mind of actor John Malkovich (John Malkovich) – for 15 minutes, before expelling you onto the New Jersey turnpike. Sounds like a business interest for Schwartz and Maxine (spend 15 minutes in someone else’s body!), but the experience of being in someone’s body slowly begins to change Schwartz, Lotte and Maxine – and having his brain invaded has a terrible impact on Malkovich himself.

If that’s not the oddest plot you’ve ever heard, then I don’t know what films you’ve been watching. The film was the brainchild of Charlie Kaufman, who developed from this into one of the most distinctively gifted screenwriters in Hollywood, a master of the quirky and weird, the off-the-wall and the science fiction tinged everyday fantasy, blessed with the ability to mix in genuine human emotion amongst the oddness.

Being John Malkovich is an inspired idea and Kaufman’s script is ingenious in its structure and progression. Never once does the film settle for the expected narrative development or the conventional structure. It’s a livewire of a film that constantly leaves you guessing, switching tone and throwing logical but unexpected plot twists at every turn. There are plenty of moments where you could expect events to take a conventional turn, but the film never settles for the obvious.

Kaufman’s inspired script was lucky enough to find a quirky visual stylist who was willing to embrace it as much as Spike Jonze did. Jonze’s direction is a masterclass in small detail, slight twists and little touches of invention that never draw excessive attention to themselves but combine to make a thrillingly off-the-wall final picture. 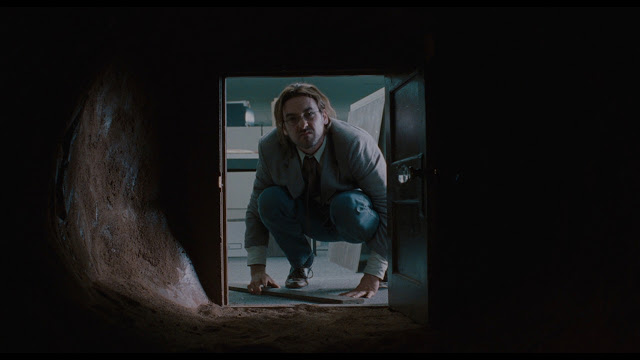 Jonze knows that the jokes and surrealism of Kaufman’s script are so effective that they don’t need a firm directorial hand to lean the humour on – they work absolutely fine presented almost as written, and make for terrific entertainment. He shoots the low ceiling of floor 7½ with such straightforward confidence that each scene becomes hilarious for its stooped actors and crammed rooms. Jonze can therefore concentrate the flourishes on core moments, from the puppetry that Schwartz and later a Schwartz-controlled Malkovich make their life’s work, to assorted training and educational videos that pepper the film at key moments.

Like Kaufman as well, Jonze’s storytelling works because he inherently understands human emotion and isn’t afraid to throw it into the film alongside the humour. Plenty of directors would have been happy to have all the principals settle into being comic stereotypes, or overplayed pantomime figures. Jonze encouraged the actors to find the depth – and sometimes the darkness – in their characters, to ground the film effectively with touches of real life tragedy and human flaws that give weight to the surreal sci-fi elements – so much so that they start to feel as real as the rest.

John Cusack’s Schwartz is a bitter, increasingly twisted fantasist and dreamer – the sort of guy who believes that his lack of willingness to compromise his art in any way is a strength (his puppetry shows are highly complex, sexualised, high-blown, poetry-inspired hilarious puffs of pretension). Schwartz could have become a joke or a guy with a big dream – but the film increasingly shows him to be a dark, obsessive, cruel even dangerous outsider, who has no problem with harming other people to get what he wants, his moral compass is driven by his self-assessment of himself as a man treated badly by others, so doing what he wants is somehow deserved. It’s an increasingly dark portrait of a man who has more than hint of danger to him.

Keener, as the focus of his obsession, also does extraordinary work as a woman the film is not afraid to present as unpleasant in her selfishness, casual cruelty and greed – but a woman who slowly allows herself to open up and reveal an emotional openness and romanticism someone watching the start of the film would never expect. Similarly Diaz’s downtrodden, sad wife at home flourishes and grows as a person, as she finds in herself a new comfort and ease with who she is, from inhabiting the mind of another person. Both are excellent.

The film explores fascinating ideas of identity – Lotte and Maxine find a freedom and an exciting otherness in being a passenger in another person’s body, and use it as voyages of self discovery for themselves. Schwartz on the other hand sees this body – just as he sees all human beings – as just another puppet for him to control, another way of adjusting the world to match his requirements, rather than change anything about himself. While some lose themselves in Malkovich’s body and find the experience rewarding, Schwartz can only find happiness when bending the body to his own will. 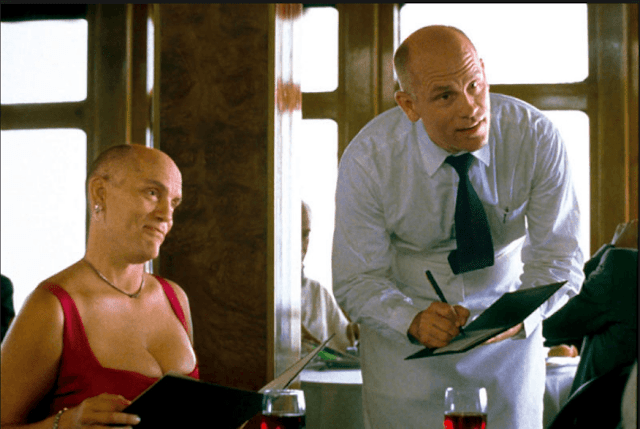 And what of Malkovich himself?  Well has there ever been a braver performance in film? Malkovich is superb as an arch portrait of himself as a rather self-important actor, with an unknowable coolness about him, an intellectualism that makes him a man easy to respect but strangely hard to relate to, a face that is distinctive but a strangely unrelatable style that makes him hard to remember (it’s really an extraordinarily funny and brave performance). As Malkovich realises what is happening to him, the film plays with real beats of tragedy and even horror – what would it be like to be forced into being a passenger in your own head? This is nothing compared to the horror Malkovich encounters when he enters the tunnel himself – to find himself in a world where everyone looks like Malkovich and can only speak using the word “Malkovich”.

Being John Malkovich uses its surreal ideas to explore profound – and even chilling – ideas of control, destiny, personality and identity. With several superb performances, a brilliant script and controlled and intelligent direction, it’s a film unlike any other – and continues to delight and surprise twenty years on from its release.
Email ThisBlogThis!Share to TwitterShare to FacebookShare to Pinterest
Labels: Cameron Diaz, Catherine Keener, Charlie Sheen, Comedy, John Cusack, John Malkovich, Mary Kay Place, Orson Bean, Spike Jonze, W. Earl Brown