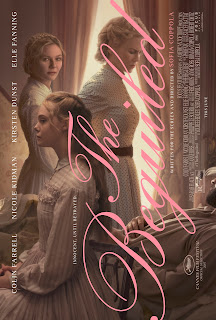 A remake of Don Siegel’s adaptation of the original novel, The Beguiled throws a feminist slant on a story of a confederate soldier, Corporal McBurney (Colin Farrell) who, in the later years of the Civil War, is found injured in the grounds of a girl’s school, where the women have continued to run the operation while the menfolk are consumed with (and by) the war. The school is run by the distant Miss Martha (Nicole Kidman), with the lead teacher Edwina (Kirsten Dunst) and five students of varying ages. All of the girls and women find themselves entranced (beguiled!) with the deceptively gentlemanly McBurney, whose true aims may be darker than assumed.

Sofia Coppola’s version of the story shifts the attention onto the women of the piece, and their plight and emotional journeys. This is a perfectly legitimate stance to take – and showing effectively a colony of girls and women in the 1860s living some sort of structured commune life is interesting and different – but Coppola’s film has a coolness and distance to it that ironically makes it far less than beguiling than it should be.

Beautifully filmed as the film is, it’s slow pace and meditative tone – as well as the rather obvious points it seems determined to make about male and female relations – actually serve to make the film less engaging than it should be. Wonderfully framed and painterly in its execution, with an effective mix of classical and 1970s style, it still never quite sparks into life.

The cast also struggle to bring a heartbeat to their characters. Nicole Kidman brings her customary reserve and elegance to a woman who has hints of a mysterious past that troubles her to this day, but the role remains distant and difficult to read – more than the film really requires. A clash or seduction between her and Colin Farrell’s corporal keeps promising dynamite but the explosions never really seem to come. Farrell laces his role with charm and a gruff masculinity, but the role misses a sense of his own darkness or manipulative nature until quite late, with the final act revelations making him appear more angry and bitter than the role really requires. It all kind of sums up the film that gets lost in its artifice and fails to uncover its heart.

The film, you could argue, does its best to beguile the audience with McBurney as the film’s character are. We are shown at every angle his vulnerability and tender politeness, and hidden from us for too long are his more manipulative elements. Coppola’s film becomes an intense study instead of sexual feelings and relations within a confined space. From sensual hand washes from Miss Martha, to intense declarations with lonely teacher Edwina, to not-so-innocent flirtations with the pupils, there is more than enough evidence that McBurney’s desire to stay may well be as much linked to seeing the school as having the potential to be his own private harem. The film’s failure in this intense sexual politics is that, while it captures moments of the simmer of attraction, it fails to really establish the danger that McBurney could suggest, as a violent man of action with complete control over a group of women.

Indeed the final moments of the film even suggest that the school itself may be a sort of siren’s bay – although lord knows McBurney is no Odysseys – which I found a rather confusing beat. Effective as the final images, or the film’s last supper betrayals, may be, they don’t carry quite enough wait because the film never quite nails the sexual tension it is aiming for, or the sensual danger it is trying to establish as a theme within the film.

Other changes make less sense as well. Coppola deliberately changes the race of Edwina, from a mixed-race young woman to someone white enough to be played by Kirsten Dunst. While Dunst’s performance is fine, many of the themes of Edwina’s lack of confidence, her self-loathing, her feeling of having no place outside of the school, of being somehow less than other women are left in place. These themes of course make perfect sense for a mixed race woman in the 1860s who has landed a job through the connections of her father, but they make less sense for an attractive young schoolteacher with a privileged background. Coppola made the change because she felt that she could not do the theme justice, but she misses the fact that the very appearance of the character is the context needed for her to make sense.

The Beguiled is beautiful to observe and has its moments, but it never really comes to light the way it should. Thoughtful and poetic a director as Coppola is, she has created a film here that feels all artifice and no depth, that wants to paint a picture of the life of women in the civil war but never really has the energy and fire to make this come to life in a way to make the audience as engaged as they should be.
Email ThisBlogThis!Share to TwitterShare to FacebookShare to Pinterest
Labels: American Civil War, Colin Farrell, Elle Fanning, Kirsten Dunst, Nicole Kidman, Sofia Coppola