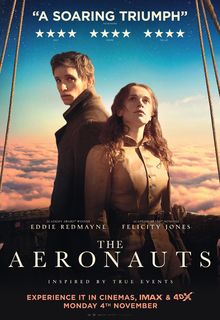 When you have found two actors with such natural and easy chemistry as Felicity Jones and Eddie Redmayne, it makes sense that you would seek other projects for them to star together in. Let’s try and recapture that Theory of Everything magic in the bottle! The Aeronauts brings these two actors back together, but the law of diminishing returns applies in this impressively mounted but rather uninvolving epic that has more in common with Gravity that it does Theory of Everything.

James Glaisher (Eddie Redmayne) is a scientist, one of the first meteorologists, determined to prove that man can predict the weather. While his theories are laughed at by fellow members of the Royal Society, Glaisher raises the cash for a private balloon trip to the heavens to take meteorological readings. But he needs a pilot: who better than Amelia Rennes (Felicity Jones) a famous balloonist and show-woman, the widow of a fellow balloonist (Vincent Perez) who fell to his death in an attempt to break the record ascent. Will the two mismatched aeronauts – the uptight scientist and the freespirit with tragedy at her core – reach an understanding amongst the clouds?

If you got the sense that the story of the film is rather predictable from that paragraph well… you’d be right. It’s the sort of film that has bookend scenes: an early one where our hero desperately tries to make himself heard during a speech at the Royal Society while his colleagues walk out in contemptuous laughter, and then another near the end with the same hero being applauded to the rafters by those same colleagues. Even his harshest critic claps politely – because it’s that sort of film. Meanwhile our other hero overcomes her survivor guilt by heading into the skies. Whenever the story, written by workaholic Jack Thorne, focuses on these personal stories, the film falters into cliché and dull predictability.

It’s told mostly in real time, following the just over 1 hour and 40 minutes of the pair’s ascent in the balloon, with flashbacks to their first meeting and their own backstories plugging the gaps in conversation. No major revelations happen in these flashback sequences, and a host of respected actors go through the motions, filling in the paint-by-numbers stories of bereavement, scientific isolation, an inspirational father with early onset dementia, and pressures to just conform to what women are expected to do. The two leads do their very best to animate these rather dull and tired plotlines but with very little success.

In fact, both actors are largely struggling the whole time to add breadth and depth to thinly sketched characters. Tom Harper leans heavily on their pre-existing chemistry and there is certainly very little in the characters to challenge them, particularly Redmayne who can play these stiff-necked, all-business, shy science types standing on his head. Felicity Jones has by far the better part as a natural adventuress who has locked herself in isolation and guilt (and in a dress) due to her guilt at her husband’s death. Jones gets the best material – and also the best vertigo inducing action sequences – in a film that is most successful when it is far away from the ground.

Harper’s film is by far at its most interesting when extreme altitudes, cold temperatures and reduced oxygen induce crisis in the balloon’s ascent. As Amelia has to go to extreme and dangerous lengths in order to force the balloon to begin its descent, the film finally comes to life. With several terrifying shots of the huge drop to the ground (they certainly made me squirm in my seat) and a compelling feat of bravery and physical endurance to force the balloon to start releasing gas (combined with some horrifyingly close slips and falls) the film works best from this moment of crisis, through to the hurried and panicked attempt of both aeronauts to control the descent of the balloon safely to the ground. The sense of two people struggling with the very outer reaches of mankind’s connection to the Earth – and their terrifying distance from the safety of the ground – really brings Gravity to mind far more than any other film.

It’s a shame then that I came away from the film to find most of it is not true. Glaisher did take to the skies – but with a male companion, Henry Coxwell. Amelia Rennes never existed (and most of the events in the sky never happened), although she is heavily based on a real female aeronaut and professional balloonist who had no connection with Glaisher or science. It shouldn’t really matter, but it kind of does as the film doubles down on Glaisher’s tribute to Rennes at the Roya Society and its general attitude of female pioneers in science. As one critic said: there were genuine pioneering women in science, why not make a film about one of them?

But it’s an only a minor problem really for a film that is impressively made when it is in the air, but dull and uninvolving when it is on the ground. At heart it’s an experience film – you can imagine as one of those immersive rides at Disney it would be amazing – but as a piece of storytelling it’s dull, predictable and uninvolving and largely fails to make the science that was supposed to be at the heart of it clear or significant. Jones and Redmayne do their best but this story never really takes flight (boom boom toosh).
Email ThisBlogThis!Share to TwitterShare to FacebookShare to Pinterest
Labels: Anne Reid, Eddie Redmayne, Felicity Jones, Himesh Patel, Phoebe Fox, Rebecca Front, Tim McInnerny, Tom Courtenay, Tom Harper, Vincent Perez