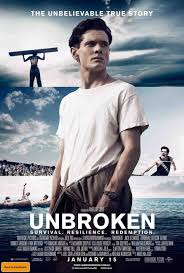 Angelina Jolie’s directing work doesn’t get the acknowledgement it perhaps deserve and it’s easy to think, watching the confident and imaginative framing of much of the film, that if, say, Brad Pitt had directed the film it might have got a more positive reaction from people. Anyway, perhaps part of the problem might be for all the extraordinary courage of Louis Zamperini’s life story, the general ideas behind the film are now so common in film-making that – and it feels terrible to say it – perhaps we are at last too familiar with these stories for them to have a real lasting impact.

Louis Zamperini (Jack O’Connell) was an Olympic athlete, who set a world record for the fastest lap in his final lap of the 1936 Olympics 5000 metres final (despite finishing 8th overall). Signing up for service in the war, his bomber crashes and (after surviving 47 days in an open lifeboat in the Pacific) he is captured by the Japanese. There he experiences the brutality of the POW camps – and earns the enmity of Mutsuhrio Watanabe (Miyavi) one of the camp’s officers, who beats him mericilessly. But through it all his determination never wavers, neither does his humanity. He remains Unbroken.

The attraction of the resilience of the human spirit never wavers – and many of us suspect we would break, making our admiration and respect for those that don’t all the greater. That admiration is easily bound up in O’Connell’s wonderful performance as Zamperini, dripping charisma powered by kindness, humanity, decency and self-respect. O’Connell dominates the film, and is also the key to its successful moments – the camera always comes back to him, and his eyes wind up telling much of the story. Without him the film would struggle to make a real impact.

Which is part of the problem with it – it doesn’t make the impact you feel it should. Jolie’s direction is technically accomplished and very skilful, and the film is beautifully shot and filmed by Roger Deakins. There is barely a foot wrong anywhere in its make-up – but for some reason it doesn’t come together into something that carries real force. Maybe this is overfamiliarity with these stories, maybe this is too much professionalism and expertise crowding the emotion out, maybe it’s just that there isn’t enough story here for it to really work. But for whatever reason, this is a film that winds up leaving you colder than it should.

Its finest sequence coves the isolation on the boat, the struggle with sun and sea, without sufficient food or water, a marathon endurance test that claims the life of one of the three men who undergo it. Jolie’s film captures the strange claustrophobia of a tiny world – one lifeboat – in a huge expanse of nothingness. These scenes are compelling in a way the later prison camp scenes just aren’t.

The camp scenes are of course tough and brutal in a way (although some have – perhaps justly –  complained that they are so beautifully and elegantly filmed that their impact is dramatically reduced, with every shot of the camp turned into some sort of renaissance-lit masterpiece) but they don’t hit like they should. Yes what Zamperini and the soldiers go through is dreadful and awful beyond measure, but nothing here seems to really capture that. It’s sort of something we understand but don’t wind up feeling from the film.

Perhaps that’s because the one thing the film does capture really well is the powerless drift of POW life. The soldiers have no control over their fates and no way of escaping it, This all gets captured in the brutal bullying of Watanabe – but the film never manages to make either him or his rivalry with Zamperini compelling, leaving me unsure whether he was intended as a representative cipher of the appalling system rather than a real character.

Unbroken won’t exactly disappoint but it won’t exactly thrill either. While I do feel not enough credit is given to Jolie – and a male star would have got more praise – this is also a film that feels too much like a Hollywood prestige picture, too much like an important film straining for those Oscars. It forgets the heart and doesn’t engage our feelings.
Email ThisBlogThis!Share to TwitterShare to FacebookShare to Pinterest
Labels: Angelina Jolie, Domhnall Gleeson, Finn Wittrock, Garrett Hedlund, Jack O'Connell, Jai Courtenay, Luke Treadaway, Miyavi, Prison Camp, World War Two