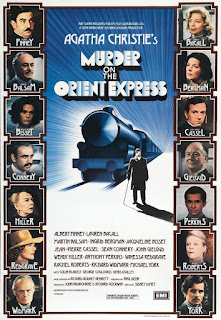 If there was a film that set the template for our expectations for an Agatha Christie adaptation, it was probably this one. A big starry cast. Luscious period detail. An engrossing plot with clues and double meanings in every corner. A healthy mix of the OTT and the chilling. Marshalled by Sidney Lumet, almost certainly the best director to take on a Christie mystery ever, this film was a massive hit then and remains a hugely enjoyable, rewarding treat now, the sort of masterclass in quality film-making and bravura acting that is guaranteed to leave a smile on your face.

You surely must know the plot by now right? Hercule Poirot (Albert Finney) returning from a successful case in the East hitches a ride on the Orient Express on the way home. During the journey he is asked by American businessman Ratchett (Richard Widmark) if he would take up the role of his bodyguard after threats against his life. Poirot turns him down – and sure enough the next morning Ratchett turns up dead in his compartment, with no less than a dozen knife wounds in his chest. With the train stranded in a snow drift, the killer must be one of the other twelve passengers in the carriage. And so the case begins…

Sidney Lumet’s superb, classy piece of murder mystery is a triumph of design and style. The train looks superb, the period detail is perfect, the costumes are luscious. But what Lumet brings to it all underneath all this Sunday afternoon splendour is a genuine sense of chilling menace. Helped a great deal by Richard Rodney Bennett’s haunting musical cues, this film never lets the viewer forget that the heartless destruction of an entire family is at the root of the crime itself, or that the desires for revenge we find in ourselves can take us to dark places. 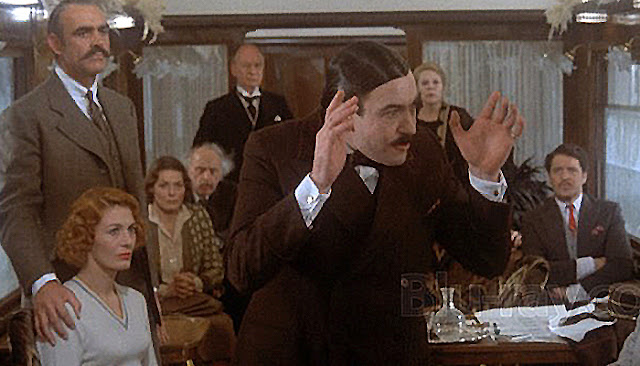 Lumet’s film opens with a brilliantly constructed series of newspaper stills, establishing the horrors of the Daisy Armstrong case that underpins the mystery, the kidnapping and murder of a young child (based on the Lindbergh kidnapping) that led to tragic consequences for an entire family. This chillingly sad and tragic back story is echoed throughout the film, and immediately establishes the stakes for all involved.

So we spend the film then trying to work out how all the suspects might fit it into this story. Lumet’s concept of bringing together an all-star cast was a brilliant idea, not only giving each of the suspects a quickly established personality (partly inspired by the actor’s body of work), but also assembling a group of such talented actors that they can sketch out a character within a few moments. Lumet’s first recruit for the cast was his old collaborator Sean Connery – and the agreement of Connery to take on a supporting role brought a host of actors to follow. It all adds to the fun, an enjoyable star-spotting exercise, and also an amusing game of watching sometime wildly competing acting styles.

Connery plays Arbuthnot with a stiff-upper lip English reserve, but then you also have a wonderfully arch (and very funny) John Gielgud, a dementedly twitchy Anthony Perkins (McQueen seems to have been adapted into a junior brother of Norman Bates), a show-boatingly larger-than-life Lauren Bacall (great fun), a Germanic stern Rachel Roberts and an inscrutable Vanessa Redgrave. That’s just a few of a terrific collection of actors, and arguably only Wendy Hiller’s overly imperious Princess Dragamiroff is a bit of a miss.

Lumet’s strength in depth allowed him to push his actors into demanding places – complex set-ups and, most especially, a series of long takes in his often confined performance spaces. The highlight – in fact it won her an Oscar – is Ingrid Bergman’s five-minute (practically only) scene where the camera slowly rotates around her across five minutes as she tells her story. Bergman’s shy, nervy, gentle and timid missionary comes across as achingly vulnerable. Bergman had been offered the larger role taken by Wendy Hillier, but wisely turned it down for this show-stopping moment.

The advantage of having such accomplished actors was most clear in the burden placed on Finney as Poirot. Watching it now – familiar as we are with decades of David Suchet’s definitive performance – it’s easy to see Finney’s performance as a little too much. Covered with make-up and a fat-suit, his shoulders hunched around his neck, his hair plastered down with grease and his accent frequently heading way out over the top, Finney certainly leaves very little in the dressing room. His Poirot is an amiable showman, a man willing to adjust his personality and approach from suspect to suspect, but in the end a man with a well-being arrogance and a deep sense of personal morality as well as a profound sense of humanity. 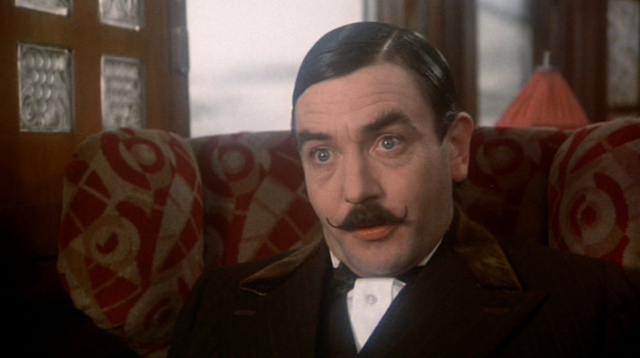 Finney was a surprising Oscar nominee for Best Actor, but he almost certainly owed this to his final speech, an almost thirty-minute tour-de-force. Lumet, operating in small confines, determined that the best way of getting the most dramatic energy from the speech was to use long takes, elegant camera moves, and the minimum of cutting – to let Poirot cast his spell over the audience as much as he does over the suspect. As such Finney – in a tiny, crowded, set – performed the complete monologue several times (each time apparently flawlessly) so that the camera could be positioned in each point in the confined set at a time. The result is seen in the final sequence, which uses dizzying long takes and careful camera moves to draw us brilliantly into the reveals that come thick and fast.

Finney’s performance is magnetic in its theatricality and commitment, and Lumet’s directing decisions throughout the sequence really help to make this sequence as effective as it is. Lumet’s peppers this sequence with a series of brief flashbacks to earlier in the film, which skilfully present snippets of the characters testimonies represented at different camera angles, which is both eerie and also throws a new light on the scenes we have already seen. For all that Finney is a bit much at times, you can’t help but enjoy this piece of showmanship.

The final resolution remains justly famous, and it largely owes a lot to this film. Agatha Christie even was favourable to the film (one of only two films of her work she liked, the other being Billy Wilder’s adaptation of Witness for the Prosecution) although (in words I presume heard by Kenneth Branagh) she bemoaned the smallness of Finney’s moustache. There have been several film and TV adaptations that have followed, but only David Suchet’s version has challenged it for the title of the best. With its gorgeous settings, imaginative direction and wonderful cast I never tire of watching it.
Email ThisBlogThis!Share to TwitterShare to FacebookShare to Pinterest
Labels: Agatha Christie, Albert Finney, Anthony Perkins, Ingrid Bergman, John Gielgud, Lauren Bacall, Martin Balsam, Rachel Roberts, Richard Widmark, Sean Connery, Sidney Lumet, Vanessa Redgrave, Wendy Hiller