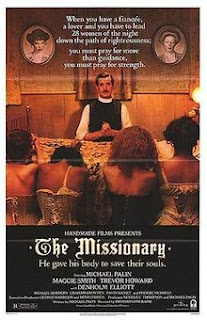 In the 1970s Michael Palin co-wrote (with Trevor Jones) a series called Ripping Yarns, affectionate half-hour spoofs of “Boys Own Adventures”, all starring Palin, told with a winning mix of affection, surreal gags and gentle humour. The Missionary is Palin expanding the concept into a full film, written by and starring the future Globe-Trotting Python. Palin plays the Reverend Charles Fortescue, who in 1902 returns from a mission in Africa (teaching the natives the date of composition of Magna Carta) to England and is asked by the Bishop of London to set up a mission in London to “save” prostitutes. Needless to say, things do not according to plan.

Palin’s script is full of some fabulous gags and a gentle, sometimes cheeky, sense of humour that gives you something truly entertaining every moment. If The Missionary does at times feel a collection of sketches and great comedic ideas and characters, rather than a fully formed filmic narrative, that matters slightly less when the jokes are as good as these. Sure, even Palin and Loncraine have said the final act of the film doesn’t completely work and largely fails to add actual narrative conclusion (it feels rather like the film required an ending, so this section was added to give it one), but it doesn’t really matter as much when the sense of fun is as strong as it is here.

Watching this on the recent re-mastered blu-ray from Indicator, this is also a beautifully made film, very well shot and framed by Loncraine with a cracking sense of pace. Visually the jokes work very well, and the push through from comic set-piece to comic set-piece that runs through the opening hour of the film is perfect.

Palin also is perfect in the leading role, his sense of earnestness and decency, his slight air of a very-British innocence and bashfulness works in hilarious contrast to when (inexplicably to him) finds himself sexually irresistible to a host of ladies. Which sounds, when you write it, like a vanity project if ever I heard it, but never plays like it for a moment as there is a superb, slightly embarrassed, befuddled awkwardness about Palin (which I don’t think any other actor could have done as well) that makes the entire concept work an absolute treat.

It’s part of the extremely British atmosphere of the film, where sex is something deeply embarrassing and slightly shameful, something we are all far too polite to talk about or even acknowledge. Rather than the atmosphere of an end-of-the-pier show the film could have had, instead it has a very dry, rather touching attitude towards sex as something completely natural and everyday, that the repression of the English has elevated to something hugely awkward.

The only person who seems to be in touch with her true feelings and sexuality is Maggie Smith’s sexually liberal Lady Ames, a woman who knows what she wants and is determined to get it come what may. Smith is superbly funny in the role, a part she keeps just the right side of parody, making it very funny but also ring very true. This makes her a complete contrast to Fortescue’s intended (played expertly by Phoebe Nicholls) so repressed she cannot bear to be touched and obsessed with a complex filing system for storing and cross-referencing her fiancée’s letters.

All this happens within a series of sketches that are worth the price of admission themselves. Denholm Elliott has a few excellent scenes as a bullish Bishop, obsessed with sport who seems unable to speak in anything but sporting metaphors. Roland Culver plays a Lord who dies in the middle of an impassioned Fortescue’s pitch for funding, to the intense social embarrassment of his wife (Rosamund Greenwood, very funny). Best of all on the cameo front is Michael Hordern, who practically steals the entire movie as a butler utterly unable to successfully navigate around the gigantic house he works in.

Through this all rides Fortescue, a man with a barely acknowledged sexual drive, who bumbles from escapade to sexcapade with a bright-eyed innocence and determination to do the right thing, but constantly landing himself in trouble. It’s a charming, playful and very British movie and Loncraine and Palin get the tone just right. It’s perhaps a little too close to Ripping Yarns, a fabulous parody of a particular era (and type) of Britishness and British attitudes, and you feel it would be comfortable as a single 45 minute episode. But when the jokes are as cracking as they can be here – and Hordern apologetically leading Fortescue from room to room unable to work out where he is or how he can get to where they want to go, is a pleasure I could watch again and again – then you’ll cut it a lot of slack.
Email ThisBlogThis!Share to TwitterShare to FacebookShare to Pinterest
Labels: British Films, David Suchet, Denholm Elliott, Graham Crowden, Maggie Smith, Michael Hordern, Michael Palin, Richard Loncraine, Romantic comedy, Timothy Spall, Trevor Howard