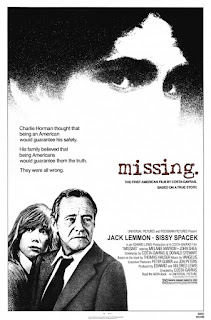 Politically motivated American films are few and far between, especially ones that take such a starkly critical view of American foreign policy. So it’s a testament to the respect given to Greek director Costa-Gravas that his first American film is an angry denunciation of America’s attitude towards Latin and South America and a criticism of the cosy assumption of so many of its citizens that the very fact of their being American will open all doors and make them invulnerable to harm.

Set in the immediate aftermath of Pinochet’s military coup in Chile in 1973 (although for various legal reasons Chile itself is never named), young American journalist and filmmaker Charles Horman (John Shea) goes missing. His wife Beth (Sissy Spacek) is left alone in the increasingly dangerous city, while his father Ed Horman (Jack Lemmon) flies into the country. Ed assumes his government will swiftly work with him to solve the mystery, and that his son must have been wrapped up in some dodgy dealings to have gone missing. He is to be brutally disabused of both notions with a painful swiftness, as he finds he and his son are insignificant factors in America’s geopolitical interests.

Costa-Gravas’ film wisely avoids focusing too much on the details of Chilean politics, or the causes of the coup, or even really concentrating on the left-wing politics of many of the American citizens wrapped up in the coup. Instead it zeroes in on the human impact of loss and pain, and by focusing less on the politics of a coup but on the impact of it, it places the audience attention instead on the atrocities that military revolutions bring. Alongside this, Costa-Gravas places front-and-centre of the story not a firebrand liberal, or a left-wing polemicist, but a character who could not be more of a strait-laced conservative, a quintessential American who firmly believes his country is the greatest in the world and heads into a foreign land anticipating doors will be opened for him and his government is here to help.

It’s vital for the film’s success that it’s the experience of Ed Horman that drives the film narrative. First appearing 25 minutes into the film, the rest of the narrative charts Ed’s growing shocked realisation that his government doesn’t give a damn about his son and, even worse, is more than happy to lie to his face about the level of their involvement. While Ed believes America to be the font of all goodness in the world, he is horrified to discover that it is at the centre of a far more shady world of realpolitik. And that his own complacent belief in the country, and unquestioning assumption that it can do no wrong, is part of what empowers its representatives to back murderous regimes. “If you hadn't been personally involved in this unfortunate incident, you'd be sitting at home complacent and more or less oblivious to all of this” the Ambassador haughtily tells Ed, after the frantic father has angrily denounced America’s policies. And, from what we saw of Ed at the start, he’s right.

It’s a superb role of growing disillusionment and a stunned realisation that his own home-grown principles and believe in truth, justice and the American Way turn out to be just words. And Jack Lemmon is just about the perfect actor for it. This might be Lemmon’s finest performance, superb from start to finish, a perfect emobodiment of All-American principles that disintegrates into someone angry, bitter and disillusioned. But at its heart as well – and the films – is the very real grief of a father who has lost his son. Worse, a father who only feels he grows close to – and understanding of – his son after losing him. Lemmon’s performances mines every ounce of empathetic sympathy from the role, in a series of heartbreaking moments as Ed begins to realise just how much he has lost in a son he begins to feel he never gave a chance.

This very personal story is at the centre of the film, but Costa-Gravas never for one moment allows us to forget – or avert our eyes – from the horrors coups like this bring. By not naming Chile, it manages to make this the face of all brutal revolutions. As characters move through the streets, or squares, in controlled, carefully framed long-shots and takes we see all around, uncommented on by the camera, unfocused on by the director, the signs of brutality. Throughout the film the background action sees casual arrests, violence, assaults, book burnings, bodies being left in the street or thrown into trucks… All around ordinary people keep their heads down or run for terror. Curfews leave people trapped outside – Sissy Spacek (very impressive) as Beth is caught out and is forced to spend a night hiding in the porch of a hotel, while gun shots ring out around the city (a regular soundtrack for every scene).

The investigation into Charles’ disappearance is pushed forward not the embassy – which presents a series of acceptable faces of the new regime and a smiling reassurance that every thing is being done – but by harried and scared survivors and asylum seekers in European embassies, who tell snippets of the events they have seen, the deaths they have seen glimpses off, the horrors of detention centres. It’s finally dragged home to Ed and Beth as they are taken to an office block with every room containing executed corpses, some identified some not, the bodies piled on every floor of the building.

In all this America – and shady military and industrial interests – are complicit, and the executions and deaths of citizens of this country (and a few Americans who unwisely mixed themselves up in it) are seen as acceptable collateral damage, the price of doing business to protect American financial interests. The Government is happy bed fellows with murderers and crooked officials, and the idea that the death of one American citizen is going to matter at all is nonsense. Costa-Gravas’ film has a firm point to make – but it makes it within the context of a very human and personal story. “They can’t hurt us, we’re Americans!” are Charlie’s final (on-screen) words: in this attitude he’s as naïve as his father, and he clearly believes just as much in the divine goodness and special status of his homeland. America has no special or outstanding moral character: it’s as mired in dirty world realities as anyone else. This rude awakening will cost the son his life and cause untold grief to his father as well as shattering all his cosy greatest generation idealism.
Email ThisBlogThis!Share to TwitterShare to FacebookShare to Pinterest
Labels: Costa-Gravas, David Clennon, Jack Lemmon, John Shea, Political dramas, Sissy Spacek, Social issues