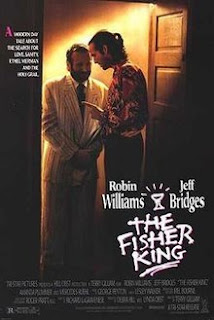 In 1991 Terry Gilliam was seriously worried he might be unemployable. After the famous feud with his producers over the editing of Brazil, his follow-up The Adventures of Baron Munchausen had flown over budget and bombed at the box-office. For Hollywood Gilliam was the worst kind of maverick – trouble with no record of financial success to give him the licence to do what he wanted. So he was thrilled to be offered the chance to direct The Fisher King, his first ever “for hire” job, a sentimental but surreal romantic buddy movie. It’s financial and critical success almost certainly saved his career.

Jack Lucas (Jeff Bridges) is a New York radio shock jock, whose show accidentally provokes a lonely and confused man to massacre the customers at a late night bar. Three years later and Jack’s career is over and he is working as a co-owner of a video rental star (and live-in lover) with Anne Napolitano (Mercedes Ruehl). One day – drunken and suicidal – he is saved from a gang of young thugs by eccentric homeless man Parry (Robin Williams). Jack discovers three years ago that Parry was a respected professor of English literature, whose life fell apart after his wife was killed in the same bar massacre that ruined Jack’s career. The two men are drawn together – but can they save each other?

The film is based on the myth of the Fisher King, the king charged with finding the Holy Grail but could not find it for years – only for a fool to present it to the king full of water to drink, revealing it was there in the King’s possession the whole time. The fool helps because he is “purer” than those more worldly around him. The idea that Richard LaGravenese’s screenplay is leaning on is that these two characters – Jack and Parry – alternate between them the roles of Fisher King and Fool, both slowly doing things for each other that change their personalities and allow them to adjust back into the world and become comfortable with the people they are.

Reading that it should become clear that this is a sentimental film – and it certainly is. It’s also hellishly overlong for such a slight story of tragedy leading to overcoming personal crisis. We know watching the film from the start that Jack Lucas is a bad guy – and Gilliam shoots his opening scenes of Radio presenting with great skill, using high angles, extreme close-ups and shots that prevent us getting any real sight of Jack, making him as impersonal and contemptable as possible in his shallowness, pride and thoughtless cruelty. It’s not a mystery to expect that we are due to watch a triumph of the human spirit film, in which Jack becomes a better man. The film takes a very long time making this simplistic point. 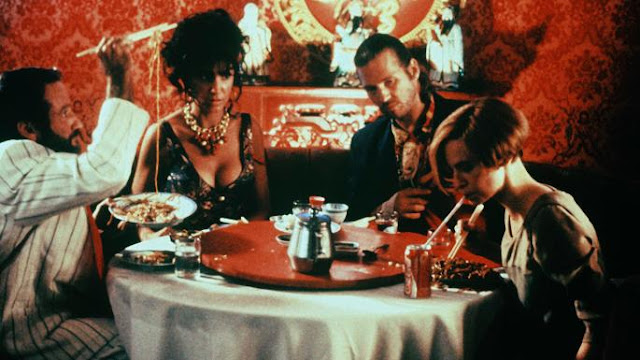 The catalyst is Robin Williams, in a role tailor made for him as a hyper-active, manic personality mixed with tragedy and depression. To be honest Williams is frequently over indulged in the role – despite his Oscar nomination – heading over the top too often, and often over-egging the pudding both in Parry’s energetic enthusiasm and also in his moments of tragic depression. Parry is given a romantic sub plot with Amanda Plummer’s nervous office worker (a character who is little more than a collection of quirks than a personality, and it’s a shame it’s led to Plummer being typecast in such eccentric roles) that is almost insultingly slight and one-sided (he comes across a bit like a stalker) and lacks any of the charm needed for the story to work.

Parry is used to tie the film into further Arthurian flourishes with his obsessions with the legend. Parry visualises a sinister Red Knight – a mental expression of his grief and horror at his wife’s death, which takes the form of the appearance of his wife’s blood splattered face – which chases him through the city. Parry is also obsessed with the discovery of the Holy Grail, which he claims can be found in a millionaire’s faux medieval castle in the centre of Manhattan. This Arthurian stuff is often rather crow-barred in, but holds more interest than traditional plot-lines of people rediscovering their humanity and capability of bonding with others. 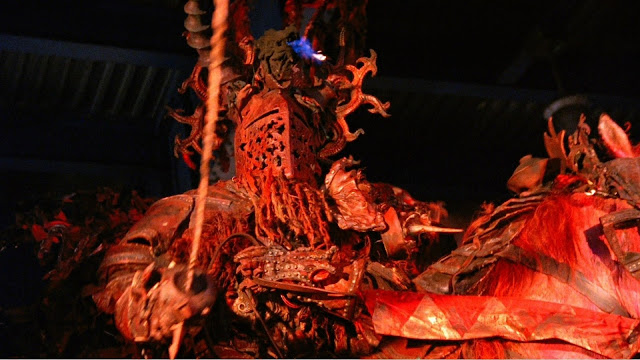 Jeff Bridges actually takes on the far harder role as Jack Lucas, a character who has to go on a firm development from start to finish. While Parry is a deliberately eccentric figure, Jack is the one who must journey from arrogance and pride to selflessness and humanity. Bridges does it very well, with a neat line in under playing and an ability to suggest the warmth, shame and self-disgust that Jack works hard to cover up. He’s also blessed to share scenes with Mercedes Ruehl who is outstanding (and Oscar winning) as his girlfriend, the most humane, engaging and real character in the film, a woman who seems at first blowsy and cheap (Jack clearly believes she is beneath him) but reveals more and more depths and capacity for honesty, love and generosity.

Gilliam has a sharp eye for the huge gap between wealth in poverty in 90's New York, and how the two worlds are geographically only a width of a piece of paper, despite being worlds apart. His direction uses many of his flourishes with great effect. Fish eyed lens POV shots, low angles, stylistic dream sequences, a dream sequence where Grand Central station is full of dancing travellers like a mighty ballroom – many of the sort of things you see in his films are here. To be honest, I found some of the flourishes a bit overwhelming in a story that is so slight and so grounded in just four people’s interactions and quests for salvations. But it works, and Gilliam gets some moments of romantic and platonic love that really work. But it’s still a slight film that goes on far too long, and it eventually loses the viewer in its time-consuming journey towards expected heart-warming moments.
Email ThisBlogThis!Share to TwitterShare to FacebookShare to Pinterest
Labels: Amanda Plummer, David Hyde Pierce, Fantasy, Jeff Bridges, King Arthur, Mercedes Ruehl, Michael Jeter, Robin Williams, Social issues, Terry Gilliam, Tom Waits