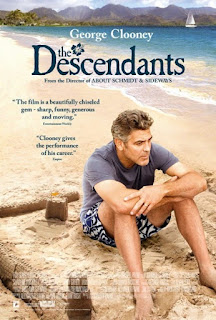 Anyone expecting a straight comedy hasn’t been familiar enough with Alexander Payne’s career. Payne’s movies are triumphant, slightly quirky, explorations of crisis in the lives and emotions of middle-aged, middle-class men. Few directors do it as well, bringing both a lightness of touch and a profound understanding of the tragedy that can underpin ordinary lives. He has an astute understanding of the pain of opportunities lost. And The Descendants is full of these, just as it is full of the hope you can gain from seizing new opportunities in the future.

Matt King (George Clooney) is a Honolulu attorney who is the last trustee representative in his vast family for a site of 25,000 pristine acres on Kauai. With the trust due to end, Matt is under pressure from his family to sell the land for hundreds of millions and gain them all their financial security. In the middle of this, his wife suffers a boat accident that leaves her in an unrecoverable coma. Matt has to rebuild the relationship with his two daughters Alex (Shailene Woodley) and Scottie (Amara Miller) as well as deal with the reveal this his wife was planning to leave him for her lover, a married estate agent Brian Speer (Matthew Lillard).

Payne’s film is heartfelt, low-key and a marvellous showcase for George Clooney who has probably never been better as the grieving and shocked Matt, struggling to come to terms with revelations about his own life that come completely out of the blue. In particular, his own realisation that he has left far too much of his family life to his wife, and his wife has in any case a less than perfect relationship with their two troubled children. Alex (Shailene Woodley) has a history of substance abuse and hell-raising while her sister Scottie (Amara Miller) is using bullying as a way of acting out. King, its clear, has let his connection with his family drift away with his consumption in his work, a character flaw that leaves him with a serious of painful revelations about his own failures.

These revelations are expertly acted by Clooney, who gives the part a rawness and edge beneath his natural charm that becomes deeply involving. He makes Matt both desperate, bewildered and confused as well as kind, decent and forgiving. Payne’s films never present easy solutions to problems, and frequently hold up their leading characters as being the root of their own troubles. It’s the case here as well, as King must learn to realise that many of the problems he is discovering in his family life come out from his own mistakes and lack of focus. How should he respond to his discovery of his wife’s infidelity? How should he decide to react when he discovers his wife’s lover had his own family?

It’s never the easy choice, and it’s never a clean and easy solution that wraps everything up neatly. The problems we encounter will eventually require us to make intelligent, emotional decisions and accept there are no clean answers. When we meet Brian Speer, he’s not a bad guy just a bit weak. It’s the same throughout. Every character has depth and hinterland. Robert Forster as Matt’s father-in-law may seem foreboding and harsh – but then he is perhaps right to blame Matt for his daughter’s unhappiness, even while he never holds it too harshly against him. Alex’s spaced out boyfriend Sid (Nick Krause) suddenly surprises Matt with his emotional insight into family dynamics.

And of course, his daughters who seem tearaways are in fact far more mature and supportive than might have been expected. Shailene Woodley is excellent as Alex, a young woman who doesn’t blame but demands to be part of solutions, and supports her father to make the tough calls. And the moral problems keep coming, mixed with surrealist comic touches. It’s the sort of film where Matt can make a shocking realisation about his wife, and then return to his table in his restaurant to be assailed by a garish traditional music band.

Despite all this Payne’s film captures a sense of affection and warmth without succumbing to sentimentality or easy solutions. The sort of satisfying outbursts of pain and cathartic anger are largely avoided for far more mature and realistic feelings of joint responsibility for problems and an acceptance that what our lives become are what we make of them as well as other people. It’s a sort of complex avoidance of black-and-white solutions that help to make the film feel truly real and grounded. While not many of us need to worry about the pressures of making decisions that will make us millionaires, all of us have had to deal with our own mistakes leading to others making mistakes and the emotional fallout that this can bring.

In the centre of Payne’s emotionally intelligent film are these excellent performances, with George Clooney hugely unlucky to miss out on an Oscar for his emotionally intelligent and rich performance here. Payne’s film takes the male mid-life and family crisis and subtly analyses from a host of positions and angles, not just the man itself. We can feel sorry for a bloke who has suffered blows but also see his own decisions have contributed to his position. It makes for a delightful and heartfelt film, which is beautifully made by Payne and superb showcase for intelligent, grown up film making.
Email ThisBlogThis!Share to TwitterShare to FacebookShare to Pinterest
Labels: Alexander Payne, Beau Bridges, Comedy, George Clooney, Judy Greer, Matthew Lillard, Nick Krause, Robert Forster, Shailene Woodley