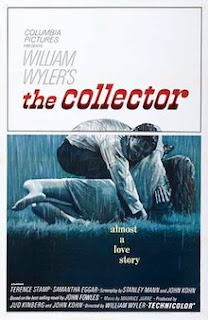 A lonely butterfly collector wins the pools. He’s rich, he can have everything he wants – but he’s still an outsider who can’t get a girl. Surely if a woman would just get to know him he’d find love. So the easiest way of doing that is probably kidnapping the woman you had a crush on at school, locking her in a carefully furnished basement in your Tudor mansion house and just wait for her to fall in love with you. Sounds like a perfect plan right?

William Wyler’s adaptation of John Fowles’ best-selling literary first novel sees Terence Stamp as the maladjusted loner and Samantha Eggar as his victim. It’s fascinating reading about the film today and the attitudes and perceptions towards it. Today the film is chilling in the obsessive, dangerous, self-pitying self-justifications of Freddie Clegg. But in the mid-60s a number of reviewers commented on the pity they felt for the kidnapper, and even expressed that in many ways he was acting on fantasies every healthy man has had (they haven’t). Quite rightly the film comes across differently today, a far more unsettling and disturbing portrait than it did at the time.

Wyler’s direction is intimate and a fine mixture of the theatrical – with its often single locations and two-actor scenes – and cinematic, particularly in the way he subtly builds up a Hitchcockian level of tension around the possibility of discovery and escape for Miranda. Sure visually he is a little too much in love with the crash zoom on key items (chloroform for example in Freddie’s car), and devices that seem a little too obvious (like the use of black and white for the film’s only significant flashback) but he mounts the entire film with an unsettling claustrophobia that works very well.

Further he draws out two fantastic performances from the leads. Terence Stamp was not a natural choice for the shy, timid outsider turned abductor – he’s obviously way too handsome and physically assured for the role – but he marshals very well the blinded arrogance of a man who believes the whole world would march to his tune if it only stopped and listened. His Freddie Clegg is softly-spoken, polite and controlled – so much so you almost forget how insane he is. Stamp also does a remarkable physical performance, making himself seem shorter and less dynamic than he really is, his body language having more than the hint of the schoolboy about it. Domineering, controlling, bullying and totally incapable of internal analysis of his actions.

You realise watching the films events unfold – and Freddie’s inability to analyse the emotional truth behind them – that he is alone because he fundamentally doesn’t understand human relationships. While many of the (male) film reviewers at the time found this strangely tragic, today it’s hard to feel anything but contempt for his cruel self-pity.

The more difficult role falls to Samantha Eggar as Miranda. Wyler’s attempt to get the best performance from here seems pretty kin to the abduction the character goes through in the film – she was kept in isolation on the film set, Stamp was instructed to not talk to her outside of shooting while Wyler constantly held the threat of dismissal over her. More than a few echoes of Hitchcock in that – and Wyler’s praise on the film’s completion for Eggar’s (Oscar nominated and Cannes Award winning) performance as more than a whiff of self-praise to it. But Eggar herself is superb as a woman who oscillates between panic, desperation, ingratiating kindness, anger, contempt and fear. Miranda is a woman who tries everything she can to get out of this situation, only to constantly butt heads against the twin devils of her countryside isolation and Freddie’s own lack of emotional and intellectual intelligence.

Because the film interestingly makes clear what a tedious and not-very-bright monomaniacal man Freddie is, compared with the educated and quick-witted Miranda. When she tries to engage him on a discussion about modern art, he is utterly incapable of beginning to appreciate artists such as Picasso (‘It doesn’t look real’), completely fails to grasp any of the ideas in The Catcher in the Rye (the book she suggests he reads) or their relation to him, and is drawn only towards the blandest, most traditional drawings that she creates while whiling away the time in captivity. He fanatically collects butterflies, rooms lined with framed specimens that he can discuss in detail but with no concept of their beauty. Every time Miranda tries to scratch the surface of Freddie to connect with him she constantly discovers he has no depths at all, he’s a little boy lost in the world who can’t understand why he can’t collect people with the ease he catches and kills butterflies. 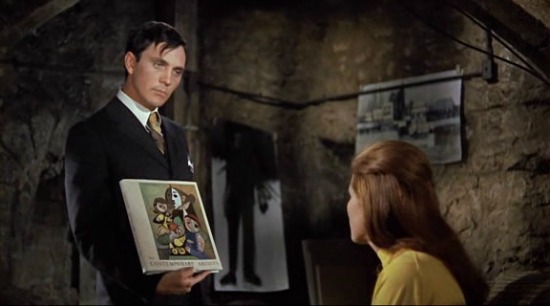 Whether the film has some sympathy for Freddie is less clear. Maurice Jarre’s luscious score certainly seems to suggest we should feel something for this misguided guy, but today it’s almost impossible to do so. The film works just as well without those feelings of implied sympathy though, which is a tribute to Wyler’s even-handed and controlled direction. Certainly Miranda’s fear and oppression are easy to connect with.

Is this a Stockholm syndrome film? Miranda – an intelligent and cunning woman – quickly realises that while she is the victim, Freddie’s desire to be seen as sort of chivalric gentleman does give her some power over his treatment of her – he wants her to fall in love for real with him. How much does she start to feel sympathy for this misguided loner? Is there any hint of real feeling at any point in her eventual attempt to seduce him (I doubt it heavily watching the film, but I may be adding a modern perspective, as I suspect Wyler wants to leave a hint there – again the score supports this feeling a bit)? I’m not sure – but the film’s eventual ending does leave little doubt that Freddie is a dangerous man, and the world is a less save place with him in it.

The Collector isn’t perfect – and perhaps its attitudes have dated – but it still has a real skill to it, some wonderful scenes – and two terrific performances from its lead actors, who I think have never been better than they are here. Wyler’s last success – and you can see his debt to the later work of Michael Powell and Alfred Hitchcock in each frame, even while he fails to match either of them – it still makes for an unsettling, troubling and fascinating watch.
Email ThisBlogThis!Share to TwitterShare to FacebookShare to Pinterest
Labels: Literary adaptations, Mona Washbourne, Prison drama, Samantha Eggar, Terence Stamp, William Wyler