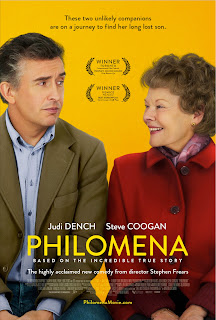 Describing Philomena as a sort of odd-couple buddy road movie with a heart seems like exactly the sort of trite journalistic spin that Coogan’s Martin Sixsmith spends most of the film deriding. But it’s a pretty accurate label, in this heartfelt and entertaining film that mixes looking at Irish church scandals, with both the shallowness and promise of journalism and a heartfelt meditation on the virtues of forgiveness.

Martin Sixsmith (Steve Coogan), a former government spin doctor, dismissed from his position is struggling to find a new purpose for himself in writing and journalism. After a chance meeting with waitress Jane (Anna Maxwell Martin) at his editor’s New Year party, he is introduced to her mother Philomena Lee (Judi Dench) an Irish woman whose son was given up for adoption by the convent Philomena had been sent to over 50 years ago. She has spent years trying to find him, but made no progress. At first Sixsmith is dismissive of this human interest story, but slowly begins to invest in the story, as he and Philomena travel to the US to try and find her lost son.

Philomena is a film that doesn’t pull punches in its moral outrage at the decisions made by convents in Ireland in the 1950s to separate ‘sinful’ mothers from their children and find them new homes. The distress of the young Philomena is clear, and the steps the church took to put barriers in the path of helping these children and their parents reuniting (from burning records to bare-faced lies) are as infuriating as their moral superiority is outrageous in its hypocritical cruelty. But it’s not a film that wants to make a simple or political point.

If the film has a problem with religion, it’s with the institutions that run it, not the faith itself. For all her ill-treatment, Philomena’s faith has been unshaken by all that has happened to her, and she like the film can separate the flaws of individuals from the principle of faith. The film may take aim at the Catholic church for making people feel sex is something dirty and shameful, but it won’t turn its guns on God himself. Near the film’s conclusion, Philomena even rebukes Martin for his rage (on her behalf) against the nuns who treated her wrongly, pointing out that she is the victim not him and that how she chooses to respond to it is her business – and if she chooses reconciliation and forgiveness that is her choice.

It’s a part of the films light and shade, very well drawn out in Steve Coogan and Jeff Pope’s script that mixes serious reflections on such matters as truth, faith and forgiveness with some good jokes and entertaining banter. The film deviates considerably from the true story it was based on – Philomena in real life never went to America – but in doing so it unlocks the story as a filmic narrative. The odd mother-son type relationship that the distant and cynical Sixsmith and the warm and engaging Philomena develop as they travel America gives the film heart, not least as Philomena constantly surprises Sixsmith with her worldliness and socially moderate views. The two characters end up bonding in a way that is straight out of a Movie-101 but it stills very real and touching.

A lot of that works so well because of the chemistry between the two leads. Judi Dench is just about perfect as Philomena. Dench expertly mixes the twinkle and charm of Philomena’s incessant Irish patter and capacity for small-talk (and fascination with everything from Mills and Boon to hotel toiletry) with a devastating emotional vulnerability and aching pain at the loss of her child, which has clearly been part of her life for so long she has learned to a certain degree to live with it. In one of her greatest screen performances, Dench will have you laughing one minute then spin on a sixpence with genuine emotional devastation or a capacity for forgiveness and reconciliation that seems impossible after what she has been through. The film builds real affection for both her old-world politeness charm and Irish loquaciousness and her emotional strength of character.

She’s well matched with Coogan, who uses his deadpan archness to excellent effect as Sixsmith. Although the film is called Philomena, it’s Sixsmith who represents the audience, and it’s his expectation of being emotionally manipulated by the story that we share at the start – and his growing investment in it that we also share. Coogan keeps the details very small, but along with a skill at delivering deadpan one-lines, he also has a considerable capacity for moral outrage and genuineness (well hidden) that serves the film very well. Sixsmith starts the story as self-pitying, supercilious and interested only in selling the story – the fact he ends it so bound up in rage at the treatment of Philomena, is a testament to Coogan’s skills for subtle character development.

Frears’ directs with a small-scale sharpness of camera and lack of flash that has been at the foreground of so many of his films, letting the focus lie on story and character. The road movie sequences that this film highlights so much are little triumphs of small-scale character story-telling, and while the jokes they feature – and even the emotional points they make – are familiar they are delivered with such grace and feeling they nearly all land.

Perhaps reflecting Coogan’s experience with the British media, it’s Fleet Street that emerges as the most 2D here, with Michelle Fairley playing a tabloid editor interested only in the story, delighting in tragic twists as they will make for even better headlines. It’s the film’s only real crudeness, but packaged within such a well-acted and richly entertaining whole, that makes a strong case for forgiveness not vindication being the true path to inner peace, it doesn’t seem to matter.
Email ThisBlogThis!Share to TwitterShare to FacebookShare to Pinterest
Labels: Anna Maxwell Martin, Barbara Jefford, British Films, Irish films, Judi Dench, Mare Winningham, Michelle Fairley, Stephen Frears, Steve Coogan