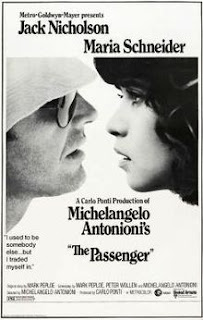 Ever wanted to jack in your life and have a go at being someone else? It’s a temptation we’ve all felt at one time or another, that chance to make a completely fresh start free of all those burdens and expectations of our own lives.

It’s a temptation thrown in the way of David Locke (Jack Nicholson) a British-American journalist, trying to make contact with rebel groups in the deepest Sahara deserts of Chad. Returning, after a failed excursion, to his ‘hotel’ in the tiny, beat-up village in the middle of the desert he finds that the only other resident, an Englishman, has died of a heart attack. The two man have a physical similarity, enough for Locke to decide to swop places with the dead man and leave Chad under a new identity as David Robertson. Curious to follow the details left in Robertson’s appointment diary, Locke finds that he has taken the identity of an arms dealer – making sense immediately of why Robertson was also in the hotel at the time – forcing Locke to stay one-step ahead of both the arms dealers and his wife Rachel (Jenny Runacre) and producer Martin (Ian Hendry) keen to talk to him about ‘Locke’s’ death.

If that sounds like it might be an action packed thriller – you’d be wrong, because let’s not forget that this is an Antonioni film, and if there is one thing you can expect from the revered auteur of the Art-House, it’s that his films are mysteries wrapped in enigmas. The Passenger is no exception, a slow, intriguing mood piece that only partially allows the audience even half a chance to puzzle out what it’s about, mixed with striking images and haunting sequences of fundamental unknowingness. Despite the paragraph above there is almost no plot in The Passenger, with the film instead focused on themes of alienation, existentialism, destiny, fate and identity. In other words all the big stuff.

Much of this is captured in the character of Locke. Played by Jack Nicholson in a stripped-down, purged style a million miles away from the “Jack” of legend, Locke is a blank. We spend almost the entire film with him, but learn virtually nothing about him. What desires or miseries or depressions drive him to abandon his life and head out into a new life? We have only vague whispers about an unhappy marriage (with a wife having an affair with someone else) and a general listless dissatisfaction with his own life and career. Locke is a character yearning for some kind of release, some kind of higher meaning – the happiest he seems to be in the movie, is hanging over the side of a cable car, arms outstretched, pretending to fly over the waters below. It’s a freedom like that – some sort of total unshackling from the modern world altogether – that he seems to want or need. 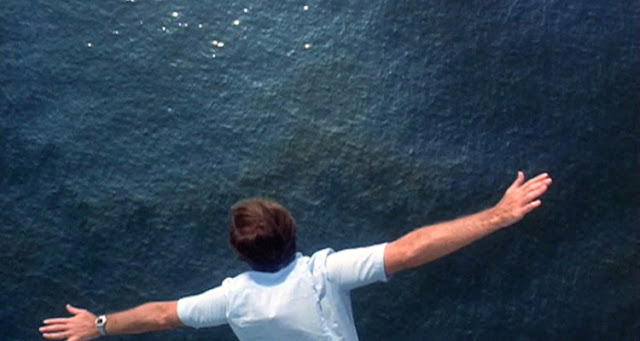 So why doesn’t he go for it? Why doesn’t he just junk Robertson’s appointment diary and escape properly into the wide world, well beyond the reach of Chad rebels, curious wives and BBC Producers? Perhaps because he is a Passenger himself, a man who lacks the essential will and freedom of purpose to make his own destiny, to escape the structure of a world he finds so constricting? Instead, he seems bound of a wheel of fire, compelled somehow to continue following some sort of structure unable to yank himself fully free of the chains of this modern world. He wants to be a free spirit, but he remains a little man, to whom events happen, who is approached by people, who follows directions not forging his own path.

He gets as close as he can to opening up by talking to a passenger of his own, a mysterious girl (played with an unaffected naturalness by Maria Schneider that is part graceful reality, part wooden stiffness but works perfectly) he encounters while following Robertson’s trail. He first spots her sitting on a bench in London, then sees her again atop Guadi’s La Pedrera in Barcelona. Is this coincidence? Is this fate? Destiny? Or is this a curious suggestion that the girl may be more than she seems? None of these questions is answered by the film, but it fits perfectly in with the unknowing vagueness and quizzical unpredictability of its events. Hammering home the blank unknowability of Schneider’s character, she isn’t even named in the film. She joins Locke on his journey, but her motivations are as vague as his – is it escape, a bohemian lark, a curiosity that guides her? Who knows? 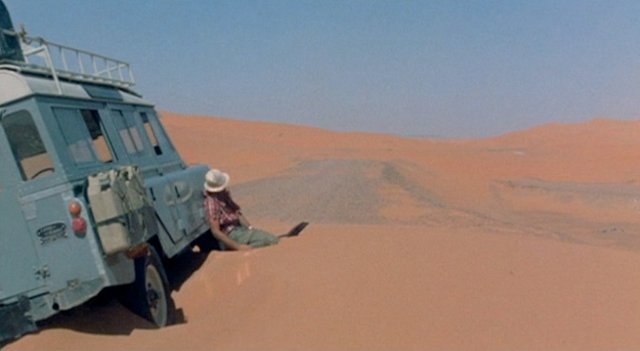 The film continues in this vein, showing Locke drifting from Chad to the UK to Berlin, Barcelona and Seville, never seeming to allow Locke more than a few seconds of freedom. Is the film asking if there is any such thing as true freedom, that even after swopping lives Locke still finds himself locked down into following a series of pre-arranged duties, like a train on a line? It’s not clear, but it’s beautifully filmed. Antonioni’s mastery of the camera shines throughout the film, and it’s full of haunting and immersive imagery, not least in his skilful use of locations and framing, with Locke and the Girl frequently positioned oddly or even dwarfed by the architecture and locations around them, from the plains of the desert to the towers of Gaudi.

Antonioni also saves for this film some sequences which are simply breathtaking in their cinematic mastery and beauty. His control of technique is near faultless – while his art house vagueness might have you pulling your hair out at points, these sequences will have you winding the film back just to relax in their skill and confidence again. Early in the film, we see Locke sit and fake his passport in his Chad hotel – oh for the days when identity theft was as simple as glueing a new photo into a passport – the camera smoothly moves around him, while he listens to recordings of Robertson and he meeting, until it settles onto the balcony (all this in one take) at which point Robertson walks into frame and continues the conversation, Locke following him and, there we go, Antonioni has taken us suddenly into the past. Without a single cut, the camera follows the conversation before panning back round to Locke sitting once again writing.

It’s a sequence that cineateases would be raving about, if it wasn’t dwarfed by the film’s penultimate shot, a stunning seven-minute single take that would be simplicity itself to make with CGI and Steadicam today, but was somewhere achieved without the invention of others. Starting on a single shot of Locke’s Seville hotel room, the pan slowly focuses on events outside the grilled window, the camera slowly zooming in on the outside until it passes through the grill and rotates 180 degrees back to see the room from the outside, while the Girl and other mysterious people arrive and leave outside. It’s a beautiful, brilliant, sublime, masterful piece of cinema. It’s compelling, surely one of the greatest “one-take” shots in all of cinema. Simply perfect. Directors could sit and dream of making such a shot.

Antonioni’s masterful direction and wilfully obtuse exploration of his themes makes for a film that is at time frustratingly unreadable, but also crammed with opportunities for the viewer to insert their own views and interpretations, something that is only going to become more tempting (and rewarding) with repeated viewings. Alongside that, it’s a simply beautiful and sublimely made piece of cinema – and if for no other reason deserves your time.
Email ThisBlogThis!Share to TwitterShare to FacebookShare to Pinterest
Labels: Ian Hendry, Italian Film, Jack Nicholson, Maria Schneider, Michelangelo Antonioni, Psychological dramas, Steven Berkoff