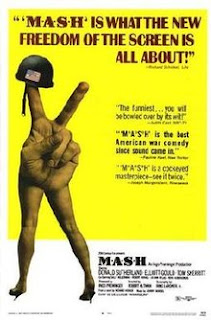 Robert Altman’s counter-culture M*A*S*H was his first (and probably only) unreserved smash hit, the film where Altman cemented his style as a director. Although set in the Korean War, the film was clearly more about attitudes towards Vietnam. Today M*A*S*H is probably more well known as the filmic spring board for the extremely long-running TV show starring Alan Alda (which, at 11 years, lasted seven years longer than the war it was set in).

M*A*S*H (like the series) covers the mad-cap antics of the doctors at the 4077th medicine outpost near the frontlines of the Korean war, a casualty clearing station where young men are patched up and either sent back to the front line or sent home. While the base is a military operation, most of the doctors serving there are drafted civilian doctors rankled by rigid military discipline. The leaders of this prickly bunch are “Hawkeye” Pierce (Donald Sutherland), “Trapper” John (Elliot Gould) and “Duke” Bedford (Tom Skerritt), with their targets ranging from generals to the stiff-backed military figures on the base, specifically the officious but less-competent surgeon Frank Burns (Robert Duvall) and Head Nurse Major Hollihan (Sally Kellerman).

M*A*S*H is the first expression of what became Robert Altman’s signature style as a director. The film has a grimy immediacy that throws the audience into the middle of the action, and is cut with an edgy lack of artifice that at the time was seen as barely competent film-making. That didn’t outrage people as much as Altman’s willingness to allow a lack of conventional discipline in dialogue delivery, with actors overlapping wildly, some dialogue drifting out of earshot or not being captured on screen, no real story being developed through it. It’s a deliberately scrappy, scratchy, almost clumsy film shot with a great deal of artistic discipline (including a spot on The Last Supper parody) but cut and sound-edited with a casual precision that makes it feel extraordinarily experimental.

It infuriated its screenwriter Ring Lardner Jnr (no doubt the Oscar that he received soothed his pain), and Altman’s loose, improvisational style and unwillingness to go for conventional framing and style also alienated his leading actors. Altman and Sutherland (with Gould’s support) each pushed for the other to be dismissed from the film (Sutherland has claimed to have never seen the film, and ton have never understood its success; Gould later apologised by letter to Altman and worked with him several times again) and the whole film’s final style – its influential fly-on-the-wall vibe and nose-thumbing lack of formal discipline – can be attributed completely to Altman’s vision and artistic independence.

The film is important as a key landmark in film-making style and in Altman’s development as a director – but there is no other way of saying it, it has dated extraordinarily badly. For those more familiar with the TV show, its tone is going to come as quite a shock. The TV show is a lighter, sillier, more socially conscious creation (increasingly so in its later years) where the tone was more japery and deadpan silliness. The film is cruel, and its lead characters are swaggering, alpha jocks and bullies, whose meanness and astonishing levels of misogyny are constantly celebrated and rewarded. For those who remember Alan Alda as Hawkeye, Donald Sutherland’s viciousness is coming to come as quite a shock!

Hawkeye and Trapper John’s vileness at frequent intervals is pretty hard to stomach (the less said about the racist, unpleasant Duke the better). The film is really keen to show that all this rampant cruel practical jokery is a survival mechanism against the horrors of war, and the difficulty of dealing with patching young soldiers up to send them back out to die. But the film never really gives us a sense of the war, and the surgery scenes (while effective in their bloodiness and counterpointing the frat house atmosphere of the rest of the film) fail to create that ominous sense of senseless never-ending conflict that the film needs to balance out the vileness of the humour. Further, while Hawkeye and Trapper John are both shown to be dedicated and gifted professionals, they also remain two-dimensional figures, never really shown to have an emotional hinterland that expands their work. They are instead more like Wall Street stockbrokers: excellent at their job, but still a pair of arseholes.

Their attitude to women – and the film’s attitude – is beyond troubling today, it’s flat out offensive. The nurses on station are treated as no more than snacks for the men to enjoy, that they are entitled to pick up as often as they like, and who are barely given any character at all. Sex is as much an entitlement as rations. On his promotion to Chief Surgeon, Trapper John demands (half-jokingly) sex, while Hawkeye “volunteers” a woman to help “cure” another character who fears he has turned homosexual and is considering suicide. Counter culture against the war is celebrated throughout – but it shown in this film to be overwhelmingly a masculine campaign, in which women have no place and no equality. Men can feel the war is terrible, and men can rebel against authority, but women exist only to service their needs.

All of this boils down into a real bad taste in the film’s treatment of ultra-professional Major Hoolihan. Reviled by Hawkeye, Trapper John and Duke for the twin crimes of taking her military career seriously and not being interested in sex with Hawkeye, Hoolihan is systematically degraded and humiliated throughout the film. From having her sex with humourless prig and fellow disciplinarian Frank Burns broadcast around the camp (giving her the nickname “Hot Lips” from her pillowtalk, a title she never escapes) to having the shower tent collapsed around her in front of the whole camp to settle a bet about whether she is a “real blonde” or not – her reaction to which we are misogynistically encouraged to view as hysteria, as dismissed by her commanding officer – it’s tough to watch. The one compliment she gets in the film on being a good nurse is accompanied by her insulting nickname, and by the end of the film she has been reduced to being depicted as an air-headed cheerleader at a football game. Even her credits picture shows her ultimate moment of humiliation. She’s seen as a Blue Stocking, unnatural because she is attractive but not willing to be sexually available to men. This is the sort of treatment that could drive a person to suicide, here treated for laughs. It’s impossible to watch with a smile today.

And it’s the dated part of the film as Hawkeye and Trapper are never questioned for this behaviour – indeed they are celebrated and encouraged throughout as fun, cool guys – when in fact they are the worst sort of jock bullies and their antics the sort of tedious frathouse rubbish that blights too many all-male clubs. They are working class Bullingdon boys, who value nothing, with the film giving them passes because they are great surgeons. Sutherland in particular isn’t charming, he’s creepy and unsettlingly cruel, while Gould at least has a madcap goofiness with touches of humanity.

Two hours with these arseholes is a long time, and the film just plain isn’t funny enough for what it is trying to do – neither does it convey the horrors of war enough, or the men’s understanding of it. More time shown on the surgeons at least acknowledging the horrors might have helped wonders – but the film assumes that we know what they are feeling and just rolls with it. You could generously say they are cruel in a cruel world. But the film never acknowledges the essential meanness of the humour here, and tries to involve us all in it with no sense of conflict or concern. It’s a troubling film to watch today, its rampant sexist cruelty is offensive and its lack of charm purely unintentional. Time will continue to be cruel to it.
Email ThisBlogThis!Share to TwitterShare to FacebookShare to Pinterest
Labels: Comedy, Donald Sutherland, Elliott Gould, Robert Altman, Robert Duvall, Sally Kellerman, Tom Skerritt, War film