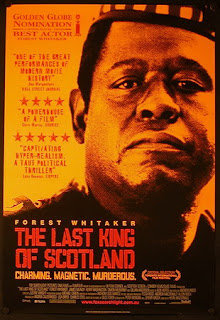 Forest Whitaker won every award going for his performance as Idi Amin. A film can perhaps only begin to scratch the surface of what a megalomaniac nutjob Amin was, and the depths of his depravity and corruption. But The Last King of Scotland is perhaps less focused on that, and more on the pull that people as charismatically self-absorbed and larger-than-life like Amin can have on the weak-minded and, on a wider basis, how this can end up with him leading an entire country on a not-so-merry dance, everyone desperate to gain the love and approval of a single dominant personality.

That weakling is Dr Nicholas Garrigan (James McAvoy) a young medical graduate from Edinburgh, who is arrogant, cocksure over-sexed and over-here in Uganda, keen for adventure and to get as much sex and experiences in as he can while he’s over here. A gap-year student with a desire for the easy life, after a chance meeting Garrigan becomes chief-physician and confidant to Amin, a man with a deep love for Scotland and who likes to think of himself as a father to those around him. It takes Garrigan a long time to realise that this indulgent, if bad-tempered, charismatic father-figure  is in fact a brutal dictator, his eyes eventually opened by the experiences of one of Amin’s wives Kay (Kerry Washington) who pays a heavy price for mothering an epileptic and adultery. Will Garrigan escape from Uganda?

Macdonald’s film gets a brilliant sense of both the exotic appeal of Uganda at the time (and or Amin) and it’s heat-embroiled danger. The camera work is flooded with yellows and grimy details, that makes every scene feel like its bathed in heat (and later danger) as well as giving it a documentary realism (helped by its use of handheld and immediate footage). The story of the film itself is a fairly basic morality tale, but these stories work because of their universality and it’s clear that Garrigan’s selfishness, shallowness and self-interest is going to lead to a terrible awakening.

The film’s real strength is Whitaker’s tour-de-force as Idi Amin. Whitaker is an actor who has been straining at the leash for an explosive roll, and he gets one here. If ever there was a part that would allow an actor to let rip it’s the one, with Amin part Hannibal Lector, part decadent Roman emperor, a low-rent Hitler with an ego larger than his country. But the bombast and childish fury work because it is built within the framework of a sort of puffed-up magnetism, a charismatic “hail-fellow-well-met” bonhomie that suggests this guy could be the best fun in the room. So dripping in assurance and confidence is Amin that he becomes strangely attractive – and the sort of all-powerful force of nature that would have most of us smiling if we caught a word of approval from him.

The trick of the film is to front-and-centre this lighter, fun-loving aspect. It’s easy to enjoy it like Garrigan as Amin charms the audience as much as he does its lead character. Sure there may be violence at the margins, but good-old-Amin is just doing what needs to be done. He’s brilliant with the people. It’s funny when he on-a-whim appoints Garrigan to decide a major architectural pitch from several countries. He’s playful and enthusiastic. When he’s cross with people he seems at first more disappointed than angry. It’s only as the film goes on that we realise we have been gaslit as much as Garrigan, that Amin may be a fun guy but he also cares nothing for anyone and that the more his focus shifts away, the more we see his callous paranoia and lack of any moral scruples.

Certainly we start getting a sense of the ruthlessness he is prepared to exhibit to enforce his rule in Uganda and the brutality with which he will suppress any resistance. Aides killed in a failed assassination attempt illicit no sympathy. He feels no guilt or responsibility for anything he does. In one brutal moment he berates Garrigan for failing to counsel him against expelling all Asians from Uganda. When Garrigan protests he did, Amin only responds with “Yes, but you did not persuade me Nicholas!” the sort of inverted logic practised only by the insanely self-obsessed. 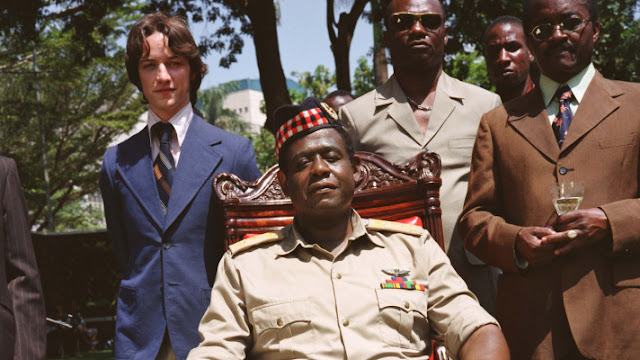 Whitaker’s performance powers all this, a magnetic masterclass in insanity, charisma and paranoia. He’s well matched by James McAvoy (the film’s real lead) whose performance is similarly a masterclass is shallowness and petty triteness. If anything the film is almost too successful in this. A Garrigan is such a little arsehole it takes quite a force of will to build up any sympathy for this serial shagger playboy. It’s capable to think as the fire turns on him that perhaps he deserves this – and the number of (mostly black) characters who lay down their lives to protect him starts to get a bit wearing after a while.

Because this in part is a film where actual Ugandans are not heard that much. The two principle characters we see are both victims: Kerry Washington in a thankless part as the attractive young wife you just know from day one Garrigan will climb into bed with and David Oyelowo as the sort of noble doctor you only seem to find in movies. For all its horror at Amin’s crimes, it’s still largely filtered through the eyes of a young, white, innocent abroad who sees up-front the dangers but the real victims of Amin, the Ugandans themselves, are clichés or elevated clichés.

While you could say that was not the point of the film, it still means we miss some of the real danger and psychopathy of the leading character, so absorbed are we in seeing the increasing peril of the white man caught up in it all. It’s why The Last King of Scotland doesn’t quite work as well as it should, any why it settles in the end for a being a morality tale plot-boiler about a monster at the heart of the forest, rather than a deeper and more intelligent film about the tragedy of an African state. It’s still enjoyable for all that, but it could have been more.
Email ThisBlogThis!Share to TwitterShare to FacebookShare to Pinterest
Labels: Biography, David Oyelowo, Forest Whitaker, Gillian Anderson, James McAvoy, Kerry Washington, Kevin Macdonald, Simon McBurney, Thrillers