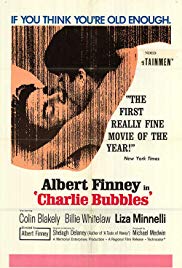 In the late 1960s Albert Finney was possibly the biggest star in British cinema. It was a status that the private and reserved Finney found challenging – and fed heavily into his only directorial effort, Charlie Bubbles, an amiable and whimsical journey through the alienation that afflicts a successful northern writer, bored by the world of success in London but no longer at home in his working class roots. It’s a story that spoke to both Albert Finney and the film’s scriptwriter Shelagh Delaney.

Because writing is really just a hobby, not a viable career path as Charlie Bubbles (Albert Finney) is constantly reminded when he returns to his home in Manchester (“Are you still working sir, or do you just do the writing now?” queries an old friend of his father). Charlie is hugely successful but also hugely bored, wrapped in ennui and barely able to engage in his surroundings be that his wealth, his London settings, working class clubs he visits with fellow writer Smokey (Colin Blakely), the attentions of his enthusiastic secretary Eliza (Liza Minnelli) and his responsibilities to his ex-wife Lottie (Billie Whitelaw) and son Jack (Timothy Garland). (The poster by the way gives a hilariously incorrect idea of the plot as some sort of lothario drama).

The film largely doesn’t really have a plot as such, just follows the drifting lack of engagement Charlie feels for everything around him. It’s largely a showcase for some nifty heartfelt writing and some intriguingly imaginative direction from Finney. It’s actually a bit of a shame watching this that Finney didn’t direct another film, as he not only works well with actors but has an original eye for visuals. One scene is shot entirely through a bank of security cameras, others take interesting angles on everything from lunchtime meetings (with many too-camera addresses) to love scenes (shot with an efficient boredom that hammers home how little Bubbles seem engaged with it).

It’s also a lovely little showcase for Shelagh Delaney, whose script is crammed with juicy little lines and playful moments, as Charlie struggles from event to event. It’s a very bitty and drifting storyline, that deliberately heads towards no particular destination. In that it reflects the aimlessness of Charlie’s own life. There is nothing particularly wrong with this, as the various sketches of which it is made up work rather well, particularly as they often engagingly switch from style and tone. There are a few other films I can think of that open with a ludicrous food fight between two friends, two guys pretending to be mannequins in a department store, a depressed man shooting pop guns at a video surveillance image, a Manchester United football game, an ex-wife catching chickens and finally the hero drifting away in a balloon. 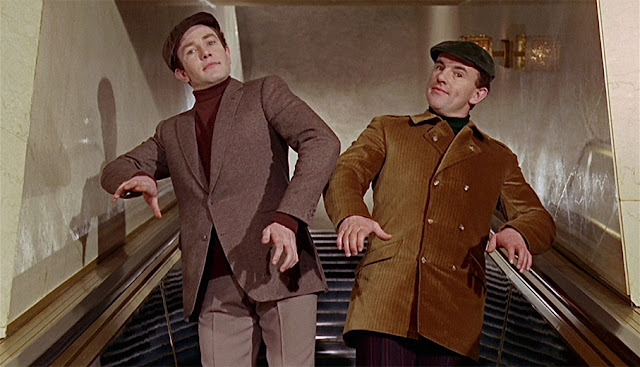 How you go with this sort of thing really depends how much you engage with the action on offer or the whimsical style of the entire shaggy dog story. It also rather depends on how much sympathy you feel for someone burdened with immense wealth and fame from overwhelming artistic and critical success. The film gives some taste of this – staying with his ex-wife she is pestered by no less than three reporters arriving unannounced eager to hear the words of the boy wonder – but it’s pretty hard for us plebs to understand. Which I guess is the film’s point.

After all every time Charlie heads anywhere around his own working class roots in Manchester, he is met with either a snide insinuation that he has lost touch with his roots or a confused lack of understanding about the London lifestyle he has left behind. Charlie himself feels like he has no empathy for the wealth of London, but struggles to feel at home anymore in a world he has left behind. Interestingly he seems most comfortable in his ex-wife’s country cottage in the middle of nowhere.

Perhaps it’s hard to really understand the feelings you could have about the burdens of success without going through this sort of thing yourself. Finney certainly had – though it’s interesting that he the actor and he the director seem to be on a different page. While the film tries to have an engaging lightness about it, Finney’s own performance is weighted down and overly somber, so low-key as to be almost pushing against the tone of the film. Perhaps it’s a role Finney needed to take in order to get the film made – or perhaps he directed the film because no one else would – but even Finney himself was critical afterwards of his performance as being too heavy for the film.

It does mean however that the lightness and perfect touch of the rest of the actors are needed to balance him out. Liza Minnelli (in nearly her film debut) is superb as an effervescent young woman, delighted with things around her, warm and eager to engage with people around her. Billie Whitelaw is also great (and BAFTA winning) as Charlie’s ex-wife who he continues to share a vast amount of romantic and sexual chemistry with, for all she has no patience for his ennui and the intrusions his fame brings to her life.

The film drifts engagingly along, before finally departing with its star in a hot balloon into the sky. It’s the sort of whimsical fantasy that also feels like a commentary from those wrapped up in the surprising boom of kitchen sink drama British films, that brought fame and wealth to those involved, but also pulled them away from feeling comfortable and happy in their own roots. It’s perhaps hard to understand without having gone through an experience like that, but it works here because most of the rest of the film has an imaginative charm to it.
Email ThisBlogThis!Share to TwitterShare to FacebookShare to Pinterest
Labels: Albert Finney, Billie Whitelaw, British Films, Colin Blakely, Kitchen sink drama, Liza Minnelli