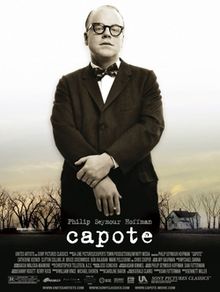 What profits a man if he gains the whole world but loses his own soul? It’s the sort of summation that I imagine Truman Capote himself would object to as trite and obvious. But it’s a question at the heart of Bennett Miller’s thoughtful, low-key biographical drama that seems to capture not only the agony of writing and creation, but also something of the soul of its lead.

In November 1959, two drifters Perry Smith (Clifton Collins Jnr) and Dick Hickock (Mark Pellegrino) kill an entire family in a remote farmhouse in Kansas. News of this is spotted by Truman Capote (Philip Seymour Hoffman), a brilliant novelist and New York intellectual, looking for his new project. Heading to Kansas, with assistant, novelist and lifelong friend Harper Lee (Catherine Keener), Capote’s initial plan for an article on the reaction of small-time America to unspeakable violence balloons into a full scale book, fuelled by his growing fascination for Perry Smith. While the book takes years – and the trial and appeals of the killer take longer and longer to resolve, the entire experience has an increasingly haunting effect on Capote himself.

Miller’s quietly and professionally assembled film, with a superbly haunting, autumnal feel to it that immediately echoes the blackness of the crime, and the traumatic effect being involved in it has on Capote. It’s also a superb film that understands how writers often work – the seizing of inspiration, the quiet observation, the shaping of moments and titbits of conversation into perfectly captured sentences that can be reproduced in the book. It helps that Capote has – despite his larger than life unusualness and eccentricity – a sort of unusual chameleon like ability, or rather the ability of the charismatically self-obsessed to make all others yearn for his attention and approval.

It’s all part of the many facets of the Capote’s personality that is brought out in Hoffman’s superb performance. Winning the Oscar – and almost every other award going – Hoffman perfectly captures not just every single physical and vocal attribute of Capote, but also seems to seize part of his soul as well. This is such a masterful examination of a person’s psyche, mixed desires and conflicting feelings that Hoffman’s psychological insight seems totally legitimate. Hoffman’s performance is strikingly perfect, transformative in the way few actors manage.

Hoffman’s Capote is a man who flits between arrogance and a caring tenderness, self-doubt and ruthless, consideration and selfishness, who slowly becomes more and more unnerved not only perhaps by his fascination with a brutal killer, but also the own moral depths he is willing to go to. He’s manipulative, emotionally intelligent and genuine enough to gain the confidence of a wide range of people – from Chris Cooper’s gimlet-eyed agent investigating the case (won other by his wife’s fondness for Capote’s novels and Capote’s starry Hollywood anecdotes) to Perry Smith’s would-be intellectual and sensitive soul who is also a hardened killer.

It’s that relationship with Smith that is the heart of the film, Captoe’s growing closeness with him akin to a seduction, Smith the willing talker, flattered to share his insights into life with the famous writer, Capote eager to gain secret confessions of what was flashing through Smith’s mind while he committed the killings. But it goes deeper than that: Capote grows – or persuades himself he does, so great is his deception – a genuine affection and regard for Smith, wanting perhaps to see that there is more to him than appears. Nursing Smith through a hunger-strike he feeds him by hand. He spends hours in his cell. He reads every scrap Smith gives him of his writing. There is a slight breathless tension to their scenes together, and Capote agonises over the idea of Smith being executed, even as he begins to be repelled by the influence of letting someone else into his life is having over him, and his ability to finish the book.

Because finishing the book is his aim, and his every action is based around getting to that goal. Every moment of flattery and openness gains some other advantage, every second of his time in Kansas is based around soaking up the information he needs to complete the work. But the book will never be complete and finished, because Capote himself has become such a part of the story – by becoming a part of Smith’s life – it seems to almost start draining Capote himself. Writing the book, is like writing his own life, pulling out elements of his own psyche, his own darkness, you feel Capote would rather not explore.

Because as much as he enjoys the recognition and glory readings of the book bring him – he is increasingly unnerved by his own ruthless treatment of Smith. Lying to Smith about the progress of the book, lying about the title, ignoring his phone calls, finally brow beating Smith into telling all of his story about the killing by disparaging all of Smith’s “insight” by claiming there is no concept or idea that Smith can express that has not already occurred to Capote. Smith is a killer, but he is also somehow a sort of lost boy – Collins performance brings a lot out of the strange innocence and promise in Smith – and it still alarms Capote privately that he can so use Smith, lie so completely to him and still feel such overwhelming unnerved grief – or fear or something – when Smith is executed, and execution he has done nothing to help prevent despite his promises to the contrary.

Capote feels equal mixed feelings about fellow writers. His partner Jack Dunphy (Bruce Greenwood in a very good performance) seems to accept his role as the lesser light – and their relationship works all the better for it. Easier than the friendship between himself and Harper Lee, superbly played by Catherine Keener. Keener and Hoffman have a natural chemistry, reflecting Capote and Lee who know each other so well they can literally finish each other’s sentences and completely understand each other. Capote however cannot accept Lee’s success of her own, striking a wedge in the relationship – just as Lee begins to believe that Capote is manipulating real people like fictional tools for his journalistic novel.

Capote tackles complex and fascinating ideas in a coolly well-assembled, extremely well directed, framework that gets some sense of the difficulties and challenges involved in artistic creation – and the moral compromises that some people are driven to make to achieve them. Not to mention the way we are can make ourselves increasingly more and more uncomfortable as we discover more and more about our own personalities and flaws.
Email ThisBlogThis!Share to TwitterShare to FacebookShare to Pinterest
Labels: Amy Ryan, Bennett Miller, Biography, Bob Balaban, Bruce Greenwood, Catherine Keener, Chris Cooper, Clifton Collins Jnr, Mark Pellegrino, Philip Seymour Hoffman