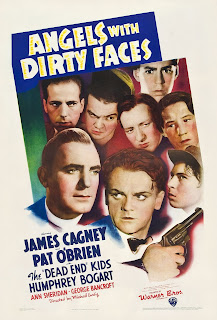 It has perhaps the most famous ending of all gangster films. Faced with his final few minutes on Death Row, charismatic gangster Rocky Sullivan meets with his oldest friend, Father Jerry O’Connell. Rocky is a hero to the kids on the block, and Father Jerry pleads with him: go the chair yellow and just maybe you can help turn these kids away from a life of crime. No way Rocky is going to lose his pride – until the final few moments, when suddenly he collapses into a morass of whimpering fear and terror. Did he decide to listen to Jerry’s pleading? Or did he really go yellow after all?

It’s the question that you are meant to take from Angels with Dirty Faces, a superb example of the gangster genre, brilliantly directed by Michael Curtiz. And it works so well because quite simply no other actor in the history of film could have pulled it off as well as Cagney does. If you have any doubts about whether Cagney deserves to stand as one of the truly greatest film actors of all time, this film erases them.

Cagney is simply superb as Rocky. Has there ever been a gangster who was so charismatic, so magnetic, so strangely decent in his way, who plays in the corrupt world of crime but has his own absolutely rigid moral code? Few other actors could have you so ready to believe he would ruthlessly pull the trigger at the drop of the hat, and yet would still be someone you’d consider inviting round for dinner. Every single scene hinges on his brilliance as a performer, and his interaction with each character is superbly judged. He is an unapologetic bad guy, a man who openly says that he isn’t sure he is capable of empathy in the same way as normal people, yet he also has a fierce sense of loyalty and doesn’t hesitate to take the rap for others or to put himself in harm’s way to protect those he feels loyalty towards.

It’s all part of the intriguing moral puzzle of the film, that rather bravely inverts the idea of good and evil that the Hays Code mandated. On the surface this is a Board approved plot of two kids from the wrong end of the block, one who ends up good one who ends up bad, with the bad one getting his comeuppance and the good saving souls all around. But scratch the surface and actually this is a film that is making far more subtle points about a world that is in shades of grey. For starters, the most faithful and loyal character in the film is the hoodlum Rocky.

But more than that, the film stresses that the margin between priest and criminal is very thin indeed. Repeatedly it’s stressed that Jerry is only a priest – rather than a fellow criminal graduate of the reform system like Rocky – because he was able to run away faster from the police during their days of mayhem as tearaway boys. It only takes chance and a few lucky turns, and the priest owes his ability to find God and the good life solely because the criminal happily took the whole rap as a Kid. The priest and the criminal work almost hand-in-hand trying to encourage the local kids to engage more in their community (even if they are teaching subtly different lessons) and their friendship is unaffected by the events of the film.

Much as the film is building a traditional narrative of crime being attractive but not in the end paying, it is also subtly suggesting that good and evil perhaps coexist in harmony more than we might think (or might be comfortable to acknowledge). Which brings us back to the title I guess: Jerry is an angel with a dirty face from his flawed childhood, but in a way Rocky himself is an angel whose face is covered with the muck of crime. Both characters have lives that have crime and misdemeanours behind them, even if they have eventually chosen different routes.

Curtiz’s film allows this commentary to bubble subtly and cleverly under a host of wonderful scenes and carefully composed sequences. The highlight of which might well be an extraordinarily well made extended shoot out scene, as Rocky faces his final show down with the cops after one crime too many. But it’s a peak of a series of superb sequences that make excellent use of framing and intent. Curtiz even makes the Dead End Kids – a group of, I’ll be honest, rather irritating child actors, whose fates I find it hard to get worked up about – reasonably engaging. There are several other fabulous performances, not least a wonderfully snivelling turn from Humphrey Bogart as a cowardly and corrupt lawyer with more than a few criminal connections.

It all comes back to that final sequence as events catch up with Rocky and the electric chair awaits. Cagney is simply brilliant in this scene, a perfect steel front of composure and pride that we are invited to question whether it cracks or he does so deliberately. Curtiz shoots the sequence in shadow play (apart from one shot of Rocky’s hands clinging desperately to a radiator) – to meet the Hays Code rules about what you could and couldn’t show on screen, the chair being a no – but it works superbly and Cagney’s powerhouse but also restrained performance nails it perfectly. While you like to think Rocky has done the “right thing” you can’t be sure – and it’s that question that hangs over it that helps cement this as a brilliant inversion of the black-and-white morals of the era: we like to think decency has prevailed, but maybe it’s all just being yellow after all…
Email ThisBlogThis!Share to TwitterShare to FacebookShare to Pinterest
Labels: Ann Sheridan, Gangster films, George Bancroft, Humphrey Bogart, James Cagney, Michael Curtiz, Pat O'Brien