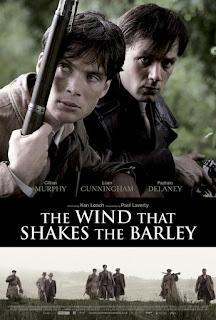 There are few directors in British cinema who have such impeccable left-wing credentials as Ken Loach. Each of his films is powered by a social and political conscience and chronicles the travails of those on the left, those struggling for the down-trodden and unfortunate, or those on the bottom rungs of society’s ladder. It was perhaps only a matter of time before he made a film about that blistering sore on the British conscience, Ireland (just as he is surely destined to eventually make a film about Palestine). It’s not a surprise that Loach’s film, with its vicious denunciation of British policy in Ireland, was met with a vitriolic response by much of the UK media, just as it was scooping Loach the first of his two Palme d’Ors at Cannes.

The film opens in the immediate aftermath of the First World War. Many of the Irish are in open revolt for independence, with Teddy O’Donovan (Pádraic Delaney) a leading IRA figure in Cork. His younger brother Damien (Cillian Murphy), a doctor, is persuaded to join the cause by his horror at the actions of the British “Black and Tan” troops in Ireland, vicious flying squads empowered to act with impunity. When the war eventually leads to a negotiated peace and the Anglo-Irish Treaty of 1922 that divides Ireland in two as a Dominion in the British Empire, the two brothers are divided. Teddy sees this as a stepping stone to peace for further gains later; Damien sees it as betrayal of the socialist message he and many others fought for, which will change only “the accents of the powerful and the colour of the flag”. A civil war across Ireland is inevitable between the government “pro-treaty” troops (supported by the British) and anti-treaty former-IRA members.

The history of Ireland is one of tragically missed opportunities, of poor British policy decisions throughout the nineteenth century (including delaying emancipation for Catholics, and a refusal to grant any level of Home Rule to Ireland for over 70 years, despite three votes on the issue in Parliament) eventually leading to many “peaceful” political movements in Ireland becoming completely discredited and the bullet seen as the only way to self-government. There is no doubt at all – as the film is not shy showing – that British policy in Ireland was often shameful, brutal, repressive, and helped enforce lasting bitterness and resentment, the impact of which is still felt today.

So, despite the furious backlash against the film as being anti-British in the press, it’s clear that The Wind That Shakes the Barley tells hard truths of the violence on both sides – of ransacked homes, murders, shootings and repression. Loach’s film unquestionably favours the Irish perspective and places their actions within a heroic context, while the British soldiers are nearly to a man foul-mouthed, arrogant, violent louts (although an officer does get a speech saying what do they expect since the black and tans are all bitter ex-front liners from France who have nothing else in their lives to come home to). But it makes a legitimate point, and it’s hard not to agree that British occupation of Ireland was, at best, a mistake and worst case a crime.

Loach’s film is harrowingly well-made, expertly shot by Barry Ackroyd, a testament once again to what a vivid and engrossing director Loach can be. Shoot-outs and violence are shot with icy-cold camerawork, mixed with handheld confusion. Political debates (of which there are many) are shot with passionate intimacy, the camera roving between the faces of those on both sides. The film’s reconstruction of Ireland in the 1920s is brilliantly done, and its engrossing recreation of the guerrilla warfare tactics of the IRA is fabulous. The acting is very good, with Cillian Murphy excellent and passionate in the lead role. Loach’s earnestness, married to his cinematic skill, is clear.

The real problem with the film is Loach’s left-wing politics, not his anti-British-establishmentism. To Loach the real tragedy in Ireland was not the civil war, but the compromise that large parts of the country made to sign the treaty with Britain and turn their back on aiming to turn a poor country into something closer to a socialist one, with collectivised industry, less power to the church and a greater equality between the rich and the poor. Loach’s film is squarely stacked in favour of the left-wing firebrands who continue the fight with the IRA, and firmly against those who support the treaty and look to gradually build a lasting peace.

To Loach, it feels like there is little real difference between the British and the pro-treaty forces. The They are both moral cowards and bullies who are fighting to maintain a status quo. There is no legitimate case made for the treaty. Those who support it in the film – like the increasingly nervous, twitchy pro-Treaty Teddy (as if Loach wanted to show him physically weighted down with guilt) – are either mealy-mouthed and guiltily shifty or hectoring bullies (like the priest who preaches pro-treaty/anti-socialism from the pulpit).

Loach is right that independence was a cause that bought everyone together, and in his argument that that the lack of a unifying idea of what the country would become next would inevitably lead to fracture and collapse. But never once in the film do we hear the voice of the ordinary Irish people, and what they wanted. Inconveniently, when put to the ballot, pro-treaty parties won the election of 1921, so the film has to have Damien (as is often the case with those on the extreme of both ends of politics I find) claim that the people didn’t understand what they were voting for, and if they did they would have agreed with him. The film’s final scene ends at a ruined house, but never once does the film (or Loach) reflect on how this embodies the catastrophic harm simple, everyday people were suffering over this period – and that they may have wanted a chance for the fighting to stop and a shift to peaceful progress towards greater independence rather than die in a ditch for nebulous political goals.

The film’s main enemy is actually compromise. Compromise is what Teddy and his gang accept when they plead for the chance for the fighting to stop, and for the country to settle for 80% of their demands now, and the rest later. Compromise is what Damien won’t settle for, and why he’ll restart a war to the death for his beliefs. Maybe it’s just me, but the art of living seems to be one of compromise and peace is built on agreements and a statesman-like acceptance that complete victory is often impossible without unacceptable loss. It’s a belief the film has no time for, and Loach seems to be advocating that the IRA should have completely rejected the treaty and instead fought to the bitter end (an action that would have probably turned Ireland into a wasteland) in the name of the socialist dream, rather than deal with reality.

It’s that which is the real problem with the film: its hard-headed clinging to the belief that any form of compromise is anathema, that death is preferable to altering your beliefs one iota, that prolonging a bloody civil war is the right thing to do rather than accept any agenda that doesn’t completely match your initial dream. Loach’s faith in his politics is admirable, but The Wind That Shakes the Barley sets out a didactic vision of Irish politics that gives no legitimate argument to the pro-treaty side, and only listens to the socialist wing of the anti-treaty group. It’s a one-sided view of history and, increasingly, a dangerous one.
Email ThisBlogThis!Share to TwitterShare to FacebookShare to Pinterest
Labels: Cillian Murphy, Irish films, Ken Loach, Liam Cunningham, Pádraic Delaney, Roger Allam, War film