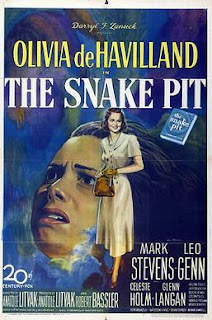 Virginia Stuart Cunningham (Olivia de Havilland) wakes up on a park bench with no idea where she is – and only the vaguest idea of who she is – and reckons she could be anywhere from a zoo to a prison. She’s actually in an asylum – or Juniper Hill State Hospital – and has been for some time, struggling with a schizophrenia and anxiety-related condition and with no idea of when – or if – she will ever leave. She is treated by the kindly, professorial “Dr Kik” (Leo Genn) and generally fails to recognise her husband Robert (Mark Stevens).

The Snake Pit is a very earnest but dramatically engaging and even quite moving story of one woman’s struggle to try and preserve her mental health, despite being stuck in a system that is a complete lottery with some patients lucky enough to be cared for and others dumped and forgotten. Litvak’s film is a passionate expose on the conditions that lack of funding and public interest had allowed to prosper in mental institutions in America, with parts of the facility little better than a Dickensian work-house, others like something out of Dante’s Inferno. It was a passion project for Anatole Litvak, who bought the rights to the book personally and pushed the studio to fund the creation of the film.

The story is centred around Virginia’s experiences of the asylum as she moves from ward to ward – low numbered wards being reserved for those considered likely to leave, with the ward number increasing as the prospect of the patient ever getting out of the asylum (or ever getting any focus from the doctors) decreasing. The staff are harassed, overworked, underpaid and frequently struggle with being heavily outnumbered by the patients, having only a few minutes a day for each one. They are also a mixed bag – there seems to be very little in the way of training – with some dedicated and caring, others seeing the patients as at best irritants and at worst little more than objects. Virginia’s real problems start when she gets on the wrong side of Ward 1 nurse Davis (Helen Craig), an officious, domineering bully who treats her patients like pupils in a finishing school and punishes ruthlessly any deviation from her rules. 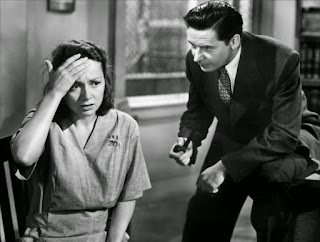 Litvak’s film exposes the conditions here, but apart from the odd individual largely avoids attacks on the staff. Instead it seems to be the general air of indifference and disregard that society has for those who end up in these places that seems to be taking the brunt of the blame. Litvak’s direction is impeccable as he uses a combination of interesting angles, sympathetic close-ups and clever transitions and fades (which serve as a neat contrast for Virginia’s own struggles to understand where and when she is). In one particular tour-de-force moment, Litvak’s camera pulls up-and-away from Virginia in the middle of the hellish Ward 33 (the Snake Pit of the title), pulling away to make the ward indeed appear it is at the bottom of a pit with the patients a mass of figures within.

Litvak’s film also benefits hugely from the simply superb performance by Olivia de Havilland. De Havilland brings the role such commitment and such emotional performance, that she is largely to thank for making the story (and not just the setting) as engrossing as it is. De Havilland is gentle, vulnerable, scared but mixes it with touches of determination and also carries with her a sensitivity that makes her as much a caring and gentle figure as it does a victim. She appears in almost every scene and dominates the film, handling the moments of quiet panic as well as she does the moments of immense distress. Her increasingly sorry state as she progresses down through the wards is heart-rendering, and her confusion and fear makes her someone we care for deeply, even while her concern and care for her fellow inmates – particularly a violent patient, played by Betsy Blair, who she takes under her wing and helps recover some of her equilibrium – makes her admirable and less of a victim. 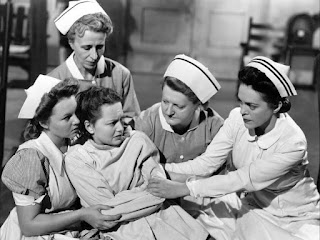 Though lord knows she suffers enough, from claustrophobic locked-in baths (her screaming fit as she fears drowning being all-but-ignored by her dismissive nurses who have heard it all before) to being strapped into a straitjacket for god knows how long (after being provoked into an angry outburst by Nurse Davis). Around this she also undergoes bullying medical examinations from doctor’s unfamiliar with her case to watching her fellow inmates being mocked and laughed at my visitors. That’s not even to begin to mention the ECT treatment she undergoes at the start of the film (“to bring her back” from the edge of disappearing into a fantasy world), a series of detailed and observed procedures which are clinically sinister.

Despite its many strengths, the film is dated in many ways. The original book avoided all reasons for Virginia’s illness. The film works overtime to give a “reason” for why she is, and of course this is rooted above all to issues related to Virginia’s failure to relax into the “proper” role for a woman in this man’s world. Her conditions are clumsily linked back to a troubled relationship with her mother and father, that led to a lack of development of maternal feelings. Guilt over a failed engagement has made her uncomfortable with marriage and nervous of men. Many of these revelations come out through a series of slightly clichéd therapy sessions that, for all the skill of Leo Genn’s performance as the doctor, carry the “and now we know all the answers” certainties of film psychiatry.

Attitudes like this date The Snake Pit – so what if Virginia perhaps isn’t wild about marriage and isn’t sure if she wants children – and the film works overtime to suggest what will make her better above all is settling down into the sort of conventional life represented by her dull-as-ditch-water husband Robert, flatly played by Mark Stevens. While the film shows that healing like this takes time – and a lot of it – it also can’t imagine a world where a woman might find a life outside of the domestic norm healthier for them. But the film remains an emotional and moving one – moments like the one near the end where the patients listen enraptured, with enchanted faces, to a singer singing about home carry real emotional force – and it has a simply superb performance from de Havilland. Litvak’s film maybe slightly dated, but it’s still an impressive piece of work.
Email ThisBlogThis!Share to TwitterShare to FacebookShare to Pinterest
Labels: Anatole Litvak, Betsy Blair, Beulah Bondi, Celeste Holm, Helen Craig, Leo Genn, Mark Stevens, Olivia de Havilland, Social issues