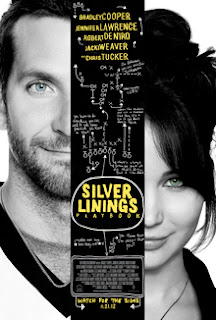 David O. Russell is a director it’s easier to admire than fall in love with. I can see why actors come back to work with him time and again – he’s clearly an actors’ director who crafts stories that give them chances to shine. But his films often have an archness about them, while I find too many of them settle for a sort of middle-of-the-road quirky cool. I’ve never really, truly, loved any of them – even if I have enjoyed them while watching them. The closest I think I’ve got is Silver Linings Playbook.

Pat Solitano (Bradley Cooper) is released from psychiatric hospital, after being confined for assaulting his ex-wife’s lover, into the care of his parents Pat Snr (Robert De Niro), unemployed now making a living as an underground bookmaker, and Dolores (Jacki Weaver). Suffering from a host of compulsions connected to his bipolar disorder, Pat is fixated on winning back his wife. To do so, he enlists the help of Tiffany (Jennifer Lawrence), the widow of a policeman who died in a road traffic accident, who has her own borderline personality disorder and has been dealing with her grief through a parade of casual sexual encounters. Together they enter a dance competition – Tiffany because she always wanted to, Pat because Tiffany has offered to take Pat’s letters to his wife if he says yes and because Pat wants to prove to his wife that he has changed. But is there more than mutual convenience between the two?

Silver Linings Playbook is an unusual romance, that also explores themes of mental health and compulsions and how thin the lines can be between what we consider healthy and not healthy. When does obsession tip over into something that should be treated? Pat is the sort of guy who wakes his parents up to furiously denounce the Hemingway book he has just finished reading in one sitting (a scene played exuberantly for laughs – including Pat smashing a window by throwing the book out of it) but it quickly tips into danger when in a similar mania he awakens the entire neighbourhood at 3am tearing the house apart for his wedding video, accidentally hits his mother, and ends in a tear filled scuffle with his dad. Similarly, Tiffany’s tendencies towards aggression and self-destruction frequently put her in situations both funny and dreadfully damaging.

But just as close to this, we have Pat Snr’s addiction not only to gambling, but also to a raft of superstitions designed to better his chances of winning (and which dominate large parts of his life). Dolores seems obsessed with maintaining peace and order in the family. Pat’s brother has an almost savant tendency to speak his mind, causing more harm than good. Every character in this seems to have their own psychological hang-ups, with resulting problems.

But the film marries this up with an actually quite sweet romantic story between two damaged souls, both very well played by Cooper and Lawrence. This was the film where Cooper repositioned himself as a major actor of note. His performance here is a perfect mixture of charm, pain, confusion, frustration, insight and self-destructive monomania. He’s both funny and deeply moving, sweet and also slappable, gentle but with a capacity for unpredictability. He’s a terrific performance, deeply affecting. It also helps he has fabulous chemistry with an Oscar-winning Jennifer Lawrence. Lawrence’s Tiffany is a vulnerable soul, desperate to appear as tough and impossible to harm as possible and not caring about any of the collateral damage. She’s as brittle as she seems rigid, and as desperate for affection as she pretends to be uncaring about it.

The film throws these two together with an obvious spark from the start, and brilliantly uses their preparation for a dancing contest to show them growing closer together physically and emotionally, as well as adding a purpose to their lives and giving them a common goal to work towards. There is a rather nice gentleness, amongst all the chaos of this film, that something as simple as taking up a new hobby can help to ground two people.

The film builds the romance gently, carefully showing it developing organically and leaving us to guess at what point the bond between these two enrichens and deepens from an instant connection to something more profound. It’s sure got a lot to overcome, with Pat’s obsessive focus on his wife and Tiffany’s compulsion for meaningless sex and her own desire to destroy promising relationships (she almost immediately alienates the surprisingly gentlemanly Pat with an offer of casual sex on their first meeting). With a gentle slow-burn, the film builds towards something that ends up being rather moving.

Russell’s adaptation of the original novel is well-structured and entertaining and his unfussy, stylish direction brilliantly creates an enjoyable mode. De Niro (in what many people called a joyous return to form) and Weaver are both very good as the parents (both were Oscar nominated – this is one of the few films to be nominated in each acting category) and there is hardly a weak beat in the cast. After several quirky, indie-cool, rather distant films, this is possibly the most fun and the most heart-warming Russell has ever been. It’s a career high. Heck even Chris Tucker is really good. And I’d never thought I’d say that.
Email ThisBlogThis!Share to TwitterShare to FacebookShare to Pinterest
Labels: Anupam Kher, Bradley Cooper, Chris Tucker, David O. Russell, Jacki Weaver, Jennifer Lawrence, Julia Stiles, Robert De Niro, Shea Whigham