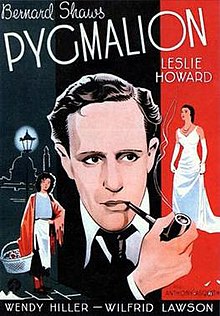 “It’s an insult for them to offer me an honour, as if they have ever heard of me – and it’s very likely they never have. They might as well send some honour to George [VI] for being King of England.” That was George Bernard Shaw’s reaction when he heard that he had won Best Adapted Screenplay at the Oscars. Now that’s a reaction that would have burned Twitter up today. Mind you Shaw wasn’t adverse to taking the film world’s money for bringing Pygmalion to the screen – and also means he is one half of a nifty pub quiz question (who is the only other person to win BOTH an Oscar and the Nobel Prize for literature?).

Pygmalion, always one of Shaw’s most popular plays, seemed a logical choice to begin for producer Gabriel Pascal’s dream of bringing a cannon of the playwright’s complete work to the cinema screens. Shaw agreed – so long as he had was on board as the screenwriter and with a personal supervision of the adaptation. He missed a trick by not insisting on creative control. Shaw re-wrote and restructured much of the play for the screen – and it’s this screenplay that forms the basis of My Fair Lady. So closely so, that it’s the most familiar version of the play – and so close does the dialogue cut that you end up wondering where the songs are.

Anthony Asquith was bought on board as the director, and Shaw oversaw the assembly of the cast. Leslie Howard was cast over Shaw’s original choice, Charles Laughton, and also given a co-director credit (although there are some disagreements about what this meant, with some claiming it was basically some on-set notes to actors). Asquith was a director with a gift for opening out literary adaptations onto the big screen, and he succeeds here in capturing much of the atmosphere and mood of Shaw’s comedy of manners. There was also a young whippersnapper called David Lean on hand to direct the montage sequences that showed Eliza’s training.

Leslie Howard was a major matinee idol, but also an accomplished stage actor – and both qualities come to the fore here in what is surely the best Higgins captured on screen (with apologies to Rex Harrison). His Higgins is a rough-edged, somewhat scruffy, eccentric who speaks before he thinks, treats everything with an absent-minded, off-the-cuff bluntness and is almost professionally rude. He’s never straight-forwardly charming, indeed sometimes he’s outright cruel and bullying, but there is a professorial lack of harm to him that makes him reassuringly British and decent. And he gives the final act a real sense of vulnerability and emotional repression that is vital.

If Leslie Howard makes a very good Higgins, I do think there is very little doubt that Wendy Hiller is the definitive Eliza Doolittle. Handpicked by Shaw, she is superb here. Her Eliza has all the fragility, worry and working-class chippiness you expect, but Hiller laces it with such a real streak of humanity that you end up deeply investing in her. Her flourishing sense of personality, of her growing strength of personality and feelings of independence dominate much of the final act of the play, and Hiller mixes it with notes of genuine hurt and sadness about the dismissive treatment she is receiving from Higgins. It’s a performance overflowing with nuance and pain – and the moment when a pained Eliza responds with a pained dignity when Higgins suggests she marry someone else that “we sold flowers….we did not sell ourselves” is a truly wonderful moment.

But this is also a very well made, cinematic movie with some really outstandingly funny sequences. The scene where Eliza – newly trained to talk “proper”, but with no idea about what makes for decent polite conversation – regales a dinner party in earnestly, perfectly accented English about her belief that “they done [that] old woman in” at great length is hilariously funny, as is Howard’s wryily amused response. There is also equal comic mileage to be got from Wilfrid Lawson’s very funny performance as Eliza’s selfish, street-smart father, the dustbinman with the mind of philosopher.

Asquith’s film is very well shot and assembled, helped a great deal by this inventively made and very structured montage sequences contributed by Lean (who also edited the film). It’s done with real snap, and Asquith’s camera movements and invention of framing dwarf’s the far more staid and flat production of My Fair Lady that would win many Oscars 25 years later. He knows when to go for low, static shots – particularly in those moments when Eliza realises she is just a toy for Higgins – and also close-ups and one-two shots that give even greater energy and dynamism to Shaw’s wonderful dialogue (again the final argument sequence benefits hugely from this).

Shaw didn’t go for creative control, so he failed to prevent the happy ending that was added to his play, as Eliza returns to Higgins (after seeming to leave to marry Freddy), and the Professor continues his pretence of indifference – which thanks to Howard’s excellent performance earlier we know is just that. To be honest, even with the performances of the leads, Eliza’s devotion to Higgins still seems to come from left-field (just as it does in the musical) and there isn’t much in the way of romantic chemistry between them. But it works for many people, even if it never works for me (or Shaw).

Pygmalion is a fine film, far superior to My Fair Lady (better made, better acted, better written, funnier, smarter, more moving and more heartwarming). It deserves to live a life outside of its shadow.