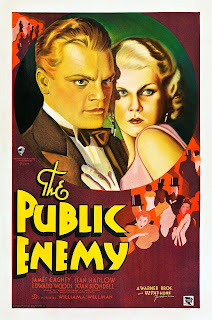 The gangster film has been popular as long as there have been movies. And if there was an actor that first became synonymous with the hair-trigger violence of the underclasses, it was James Cagney. The Public Enemy was Cagney’s big-break, a career shift from the song-and-dance films that had been his bread-and-butter before this. Cagney seizes the opportunity with relish – and helped set a template that everyone from Tony Montana to Tommy Vito have followed ever since.

Tom Powers (James Cagney) is an impulsive, violent, ambitious small-time crook who gets more and more embroiled in the world of crime, from his boyhood in the 1900s to the introduction of prohibition in the 1920s. Partnered with his lifetime-long best friend Matt Doyle (Edward Woods) – and despite the disapproval of his straight-laced brother and war vet Donald (Mike Powers) – Powers rakes in the crash as an enforcer for Paddy Ryan’s (Robert Emmett O’Connor) liquer business. But when the gang war breaks out, the dangerously impulsive Powers finds himself in the middle of a situation he can no longer control.

Cagney amazingly wasn’t the first choice for Powers. In fact, he started shooting the film playing the terminally dull nothing-part of Matt Doyle, with Edward Woods playing Powers (the two child actors at the start of the film playing their young versions, specially cast for their resemblance to Cagney and Woods, remain noticeably the wrong way round). Cagney’s charisma tore up the screen in the rushes – far overshadowing the bland Woods – and the call came from the top: “Swop these guys round!” And so film history was born.
As silence turned to sound in the movies, so the style of acting that the movies required grew and changed. Originally sound was the preserve of the well-spoken, crystal clear, the mic needs to capture every word, diction of the classically trained actor (half the cast in the film continue to speak with cut-glass, Mid-Western clarity). Cagney was something else. A little spitball of energy, who rushed through the lines, who threw in his own accented casualness, who dropped letters from words, who felt real and alive.

It’s astonishing watching this what a brilliantly modern actor Cagney is: the little psychological touches that speak to Powers’ many hang-ups and insecurities. The commitment to any bit of business required. The method dedication to doing things for real (not least his insistence that at one point Donald Cook punches him for real). His Powers is a brilliant portrait of searing nervous energy – that lifetime of dance training paid off in spades in Cagney’s mastery of physicality – and ruthless thoughtlessness, spiced with a touch of smartness (“Your hands ain’t so clean. You killed and liked it. You didn’t get them medals for holding hands with the Germans” he sneeringly tells his brother). It’s a masterful performance of magnetism that holds so much influence with films to come you’ll retrospectively see touches of Cagney in nearly every dangerous psycho played by actors such as Pacino, De Niro and Pesci.

Wellman’s film is also hugely influential, practically laying the ground work for the structure of gangster morality tale – from those first trivial involvements in crime, the getting deeper, those terrible relationships (often with a girl with a pauncheon for dangerous men), the isolation and the fall. Wellman shoots it with a brilliant eye for action – there are majestic chases, gun fights and punch ups that still entertain today (for all their slightly old fashioned look). As a piece of pulp story telling this is damn high class. 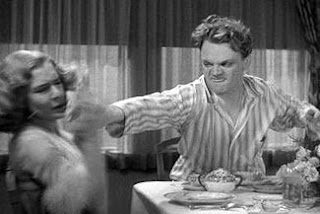 But the other trick is that some of the best scenes are those away from the action. Powers clashes with his brother are brilliantly done. An early sequence in which as a boy Powers wordlessly takes the strap from his strict father (a scene that is echoed years later in Scorsese’s Goodfellas, with Powers a clear prototype for both Tommy and Henry in that film) is brilliant. Most famously of all, the breakfast sequence when a bored and frustrated Powers shoves a grapefruit in the face of the (legitimate) complaints of a girlfriend. Watching it today it’s amazing to think how influential this scene was – audiences hadn’t really seen anything like it.

And it works as a dance with the devil because Wellman and Cagney both know that we might not want to spend time with Powers, but a part of us wants to see this working-class grasper and charismatic fun-loving criminal to succeed and get-ahead. You end up rooting a bit for him – even though you know, with the Hays Code in place, that Powers won’t still be standing by the end of the film. The executives were so worried about audiences being a little too keen on Powers, they added a sanctimonious message about the dangers of crime to the start of the film.

Fast-paced, pulpy, violent and full of excellent scenes with a real eye for how America grew and changed over the first 25 years of so of the 20th century, Wellman’s Public Enemy is a masterclass of film-making – and about a zillion times more influential than many of the prestige films released at the time. But it also works so well because Cagney is one of the best there is, not just in the gangster films, but films themselves. A performer you can’t tear your eyes away from who turns a pulp character into a sea of complexity, he’s as much one for the ages as the picture.
Email ThisBlogThis!Share to TwitterShare to FacebookShare to Pinterest
Labels: Crime drama, Donald Cook, Gangster films, James Cagney, Jean Harlow, Joan Blondell, William A Wellman