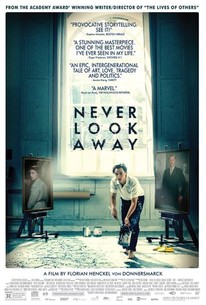 In 2006 The Lives of Others propelled Florian Henckel von Donnersmarck to the fore-front of the European Arts Film circle. His follow-up, the Depp/Jolie starrer The Tourist was a disaster that sent him spiralling back. Now von Donnersmarck returns to German cinema – and the travails and divides of a country split for a large chunk of the 20th century into East and West – with Never Look Away a film heavily inspired by the life and work of famed German artist Gerhard Richter, with splashes of German history and it’s difficult relationship with both fascism and socialism.

Kurt Barnett is an artist growing up in Nazi Germany, living outside Dresden after his father lost his teaching job due to his reluctance to join the party. Barnett’s family is hit hard during the way – his two young uncles are killed, Dresden (and everyone he knows) is destroyed. Worst of all his inspirational artistic sister Elisabeth (Saskia Rosendahl) is diagnosed with schizophrenia and is quietly killed during the Nazi programme of removing “unsuitable elements” from German society. That decision is taken by Professor Carl Seeband (Sebastian Koch), a natural survivor and amoral egotist who later makes the adjustment smoothly to living in the Socialist East. Barnett (played by Tom Schilling as a young man) meanwhile goes to East German art school, falling in love with a fashion student Ellie (Paula Beer), but struggling to find his own voice in an East Germany where all art must serve a social purpose. Will escape to the West bring freedom of thought?

Never Look Away is a mantra in the film, in an epic quasi-biography that explores the dark underbelly of German history, filtering the countries struggles to find some sort of freedom through the world of Art. It also has an unflinching eye for the losses and horrors of Nazi Germany, with the film never turning away from the brutal impact of the bombings of Dresden, the death of Kurt’s uncles on the Eastern front and (toughest of all) the shuffling of his tragic aunt into a gas chamber.

But the film also works so well as a commentary on the silent repression Germany has suffered throughout the twentieth century, from the fear of stepping out of line with a contrary opinion in Nazi Germany, to the repression of individualist thought under Communist East Germany. “Never Look Away” are the last words Elisabeth speaks to Kurt – and it’s what fuels his eventual move towards Art that comments on reality with its blurred reproductions of personal snapshots and images (see Gerard Richter’s art).

Von Donnersmarck uses art as a neat commentary for these ideas by showing how, in each era of Germany, the comments and views of art reflect each other. The film opens with the young Kurt and Elisabeth taking a tour around a Nazi “Degenerate Art” exhibition in Dresden, which suggests the likes of Picasso and Dali are either insane, moral degenerates, perverts or all three for their failure to create art that properly reflects nature. Later at the East German art school, the same artists are denounced again for failing to carry a proper and correct social message in their work. The tables are turned in the free Germany of the 1960s, where Modern exhibitionist art is all the rage, and paint and canvas is so passe as to be almost vulgar. Three different political spectrums, three very different dictates from society about what constitutes art.

How’s a man to find himself, and his personal expression as an artist, in the middle of this? Kurt is a gifted painter and drawer, but in every era his work is moved towards what is expected of him. As a boy in Germany he hides his impressionist sketches. In East Germany he becomes a famous painter of socialist images and murals. In the art college he tries to shift his style into the experimental alleyways of his peers – work that his professor (played with a neat mixture of pretension and earnestness by Oliver Masucci) recognises his not his true voice. It takes putting his own spin on images and memories of the past – of careful reproductions than subtly blurred to reflect our own imperfect memories (a visual trick von Donnersmarck prepares us for throughout the film with Barnett watching things move in and out of focus as they happen before him) works perfectly.

The film throws together this mix of art and German history with a thick streak of melodrama, which should be ridiculous but basically seems to work. Contrivance and coincidence bring together the fates of Barnett and Professor Seeband, the man responsible for the death of his aunt, and bounds their lives together forever. It’s a narrative development that could make you groan, but somehow the film gets away with it. It probably mostly works because Sebastian Koch is excellent as Seebold, even if the man is so base, selfish, lacking in shame and principle and coldly, uncaringly ruthless that he feels at time almost like a cartoon. No deed of greed and bastardy is beneath him, and the score frequently underlines his villiany with a series of unsubtle cues. 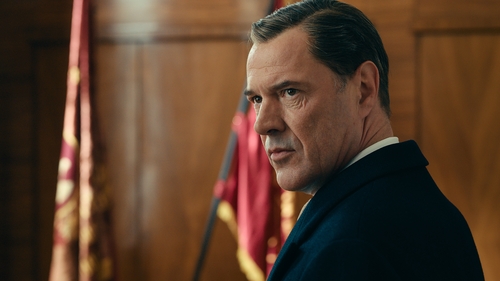 But it works because Koch’s Seebold is also a marvellous commentary on the flexibility of so many in Germany. Seamlessly he turns himself from proud SS sterilisation and termination doctor, into proud East German Socialist leader and finally into centre-piece of West German society as a leading surgeon. Just as art is bent and shifted, so Seebold represents how people will allow their lives and principles to adapt and shift with all the rest. It’s worth a bit of melodrama and some plot twists that lean on the unbelievable (and are based far less on reality than most of Richter’s life).

But the sections that focus on Barnet/Richter are just as fine, and von Donnersmarck brings energy, excitement and joy to the act of art creation in the way few other film makers have done. Tom Schilling continues his excellent run of roles, as a passionate free-thinker, yearning to have the chance to find his own voice and Paula Beer is just as good as his wife, whose artistic soul is just as strong, even if she does get a (albeit moving) can-I-have-babies plotline. The relationship between these two is striking for its loving affection and genuine warmth. And it gives the film a real heart.

Never Look Away isn’t perfect, but in its marvellous expression of the joys of artistic creation and the way that art is bent and used for the needs of government and society, it has a lot to say. With excellent performances across the board – Schilling, Koch and Beer are fabulous – it is also a fascinating commentary on the schizophrenic nature of Germany itself throughout much of the twentieth century. Melodramatic and obvious at times – and even I will say overlong at nearly three hours – a thudding mix at times of points made with too much force, it’s also a marvellous exploration of art and artists. Von Donnersmarck is back.
Email ThisBlogThis!Share to TwitterShare to FacebookShare to Pinterest
Labels: Artist biography, Florian Henckel von Donnersmarck, German cinema, Paula Beer, Saskia Rosendahl, Sebastian Koch, Tom Schilling