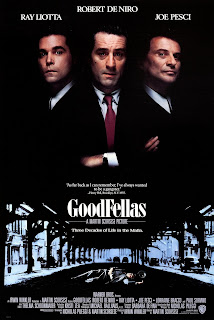 If there is one film loved more than any other in Martin Scorsese’s filmography, it’s probably Goodfellas. It’s a seismic high-point, not just in its genre – the greatest gangster film ever made since The Godfather Part II – but in film-making, it’s influence and legacy seeming to hung over everything ever since, not least the next-great gangster epic The Sopranos (with which it shares a whopping 27 actors, most notably Lorraine Bracco, Michael Imperoli, Frank Vincent and Tony Sirico). But, on top of all that, Goodfellas works so well because it is a masterpiece of both style and substance, a superbly inventive film that uses all the tricks of cinema to tell a fascinating and brilliantly paced morality tale.

“As far back as I can remember I always wanted to be a gangster”. So says Henry Hill (Ray Liotta), our Irish-Italian guide (and those heritage distinctions are very important in this world) who joins the wrong crowd as a teenager in the 1960s and winds up a strung-out, cocaine-addicted wreck in the 1980s caught by the cops and turned for states evidence, fleeing to an obscure life in witness protection with his long-suffering wife and sometime-accomplice Karen (Lorraine Bracco). Along the way though, Hill loves the glamour and greed of the gangster life, it’s excitements and boys-club rules, guided by his mentor the terrifyingly ruthless Irish-Italian Jimmy “the Gent” Conway (Robert DeNiro), psychopathic fellow gangster Tommy DeVito (Joe Pesci) and menacingly quiet capo Paulie Cicero (Paul Sorvino – never better).

Scorsese’s film is an electric celebration of movie making, partly why it’s so beloved of film buffs. Scorsese marshals all the weapons in his considerable arsenal as filmmaker. We get jump cuts. We get freeze frames (each marking a significant moment in Hill’s life). We get sharp editing. We get unreliable narration. We get dizzyingly brilliant long-shots and tracking shots (none more so famous than Henry and Karen’s arriving at a club – from travelling from the back door, through the kitchen and into the best table at the club all in one wonderful shot). We get Scorsese’s brilliant use of music, his perfectly placed camera, his brilliance in knowing when to hold his shots, his mastery of lighting (an early hit is so bathed in red it feels like digging a grave in hell). This film was the master at his ultimate height, inspired by everything from the New Wave to old-school 1930s gangster films.

He was also perfect for the material, as no one perhaps understood this world better than Scorsese: and that’s the seductive good and the terrifying bad. Back to that shot of Karen and Henry arriving at the club. The whole sequence – the deference with which Henry is treated, his cool comfort with power, the exclusiveness and special treatment of the whole thing – that smacks of the sort of ultimate party we can only dream of. For most of the first half of the film, Scorsese totally understands why this life is so appealing and exciting. Sure there is violence. There’s danger. But there’s also comradeship. There’s doing anything you want all the time (so long as you stick within the clubs rules). There’s being treated by a God by those around you. Who wouldn’t enjoy that? Is there any wonder Henry saw this as he was growing up and, more than anything, wanted a part of it? In voice-over Karen makes it clear, all this violence and power and being asked to hide guns by your boyfriend is sexy. Who cares about the implications, give me a slice of that pie.

Without understanding this glamour, the film could never show the dark depths of the underbelly of gangsterism. Strangely, perhaps because this is a blue-collar film (the highest gangster we see, Paulie, is still only a few steps away from the street), it’s easier for viewers to give these guys a pass for their behaviour (in a way no one did with Scorsese’s spiritual sequel, his white-collar crime movie The Wolf of Wall Street). Don’t be fooled. Scorsese hints at it with the opening prologue, with Henry, Jimmy and Tommy pulling over a car to brutally finish off (with a spade, knife and gun) a body of a yet-to-be-revealed victim in the back of a car. These ain’t good guys, and for all Henry is shocked by the capacity of violence from the other two he does nothing to stop it.

Because violence is what powers this film, it can happen anytime, it can happen to anyone and your killers always come to you smiling as friends. The gangster code preaches all the time about never betraying your friends, never ratting. But these guys stab each other in the back all the time. There is no honour among thieves. Every hit comes seconds after friendly enquiries and laughs. When Jimmy masterminds a brilliant heist, so paranoid and distrusting is he of those he did the crime with that he has them all killed (a masterful cut montage). Later in the film, strung out on cocaine and terrified of the law Henry treats every meeting like it’s the entrée to him being killed. Even Karen isn’t safe – witness the brilliantly oblique scene late in the film when Jimmy offers her some coats ‘they’re just round the corner’ – is it a hit? Are the coats real? Who knows... 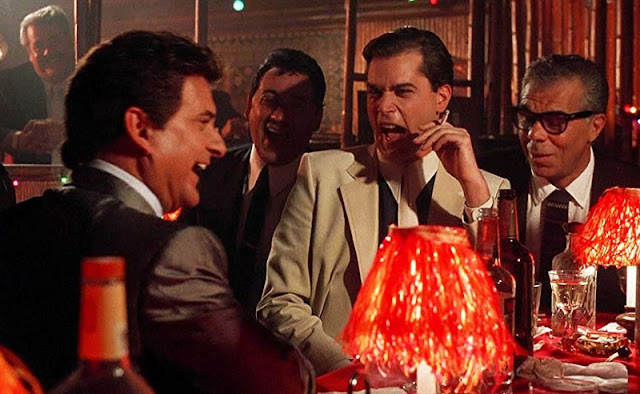 Loyalty is only extended at best to one or two figures. Jimmy (Robert DeNiro in imperious form, terrifyingly cold and also generously ceding the best moments to his co-stars) seems to have a never-ending patience for the psychopathic, instinctive violence of his best friend Tommy. Played with a petrifying Oscar-winning flourish by Joe Pesci, Tommy is like a murderous Rumpelstiltskin, a brutal killer and wired murderer who can explode at any moment. Witness the famous “Funny how?” scene – it plays superbly off Tommy’s unpredictability, his hair-trigger possibility to either laugh with you or shoot you. Much of the film’s problems for our ‘heroes’ – not less that body in the boot of the car – stems from Tommy’s capacity for thoughtless violence.

Scorsese directs these scenes with such unbearable tension, that any romance of the early sequences of the young Henry Hill disappears. How could you even begin to imagine spending time in a room with these violent, soulless men who kill each other at the drop of a hat? Despite all this, never for one moment until the very end does Henry even consider leaving this world behind. Like so many of the characters in The Sopranos the addiction of this world of power is just way, way too much and if that means a short life then, hell, so be it. Even at the end on witness protection, Henry’s punishment is that he is forced to live a normal life like a no-body (or rather like the rest of us) while balancing the guilt of betraying the people he left behind. Loyalty is a complex thing, but always one-sided in the Gangster world.

As Hill Ray Liotta gives the finest performance of his career. Henry is part wide-eyed naïve dreamer unaware that his dream is a nightmare, and loving every minute of it. Liotta’s Hill is an addict to everything he touches – danger, violence, infidelity and most damagingly of all the mountains of cocaine he is consuming by the 1980s. Compared to the other gangsters, he’s a decent guy – but only in the sense he hesitates (slightly) in the face of murder. He’s selfish, greedy, strangely likeable oddly sympathetic but you feel he gets everything he deserves. Just as good is Lorraine Bracco as his wife Karen, too aroused and infatuated with the bonuses the crime life brings her to listen to her conscience.

Scorsese’s film is a masterpiece that completely understands that the gangster life is, at the end of the day, a series of boys who never grew up who espouse concepts like duty, honour and faith but live lives of greed, petty murder, vengeance and savagery. Sure walking on the dark side can be fun, can be exciting and can bring you some immediate bonuses. But it also leaves your soul as cold as Jimmy’s or as blackly non-existent as Tommy, the sort of guy who can pour affection on his mother while shrugging off her worries about what that terrible smell is in the boot of his car. These guys are having fun for half the film, until they aren’t, but don’t get seduced by the fun of it. Scorsese knows only too well that they’re going where the film started: a red light washed grave in the middle of nowhere.
Email ThisBlogThis!Share to TwitterShare to FacebookShare to Pinterest
Labels: Crime drama, Gangster films, Joe Pesci, Lorraine Bracco, Martin Scorsese, Paul Sorvino, Ray Liotta, Robert De Niro, Samuel L. Jackson