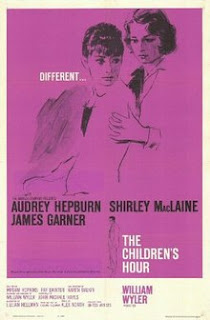 The Children’s Hour was William Wyler’s second stab at directing an adaptation of Lilian Hellman’s play of the same name: a story about  two young teachers at a private girls’ school, and the destruction wreaked on their lives when a malicious pupil spreads rumours the two are in a secret lesbian relationship. His first attempt from 1936, These Three, kept as many of the themes as possible but carefully deleted every single reference to homosexuality in the script. This second film version restores this core theme in a carefully structured, well directed, respectful film adaptation that, with its careful analysis of the danger of rumours and snap judgements, still feels relevant today.

Martha Dobie (Shirley MacLaine) and Karen Wright (Audrey Hepburn) run a private girls’ school. Karen is engaged to Dr Joe Cardin (James Garner), and this prolonged engagement is part of the arsenal used by a bitter, bullying student Mary (Karen Balkin) when she decides to start spreading innuendo about a scandalous relationship between the teachers, painting Martha as consumed by sexual envy. Mary’s story is believed whole-heartedly by her grandmother, doyen of the social scene and Joe’s aunt, Amelia Tilford (Fay Bainter). Thoughtless words from Martha’s aunt Lily Mortar (Miriam Hopkins) make things worse. In no time, the school is ruined, the children all gone and Martha and Karen face a desperate battle to prove that there is nothing to this but gossip.

Wyler’s film is a strange mixture at times, in part a commentary on prejudice, and also a scorching condemnation of jumping to judgements. The film plays out all this with calmness and a general careful avoidance of histrionics and lecturing. The removal of the children from the school is brutal and cowardly – with none of the parents having the guts to say why they are doing what they are doing until finally confronted by Karen. Amelia Tilford goes about her campaign of moral righteousness with a holier-than-thou superiority while constantly stressing that she takes no pleasure in this. In the latter half of the film, the abandoned school seems to be constantly surrounded by smirking men.

The film carefully outlines that this sort of moral judgement is inherently wrong, and it brings out some true moral judgement on many of the people involved. It draws out a brilliant Crucible-like indignation at the rigidity and hypocrisy of how those who are judged to be different are treated. The film’s finest sequence is at the centre of the film, where Martha and Karen make a (failed) attempt to nip the scandal in the bud by confronting Mary at her grandmother’s house. The scene zings with a burning sense of injustice, as Mary’s lies are believed, doubled down on and then confirmed by a blackmailed fellow student, all while the audience knows that everything that is being spun is florid, innuendo-filled rubbish.

Mary is a bitter, twisted, angry little girl whose face seems permanently screwed into a furious frown. She also has the sharpness and ruthlessness of the natural bully, successfully blackmailing a sensitive, kleptomaniac student to endorse all her lies at every turn. Wyler carefully demonstrates that she has a natural manipulator’s deviance and that half-facts and muttered comments carry more conviction and force than carefully stated arguments ever would.

But Mary’s actions partly stem from Karen’s own forceful treatment of her – and Karen’s moral inflexibility and personal certainty is just one of the many character flaws that this lie brings closer and closer to the surface. Well played by Audrey Hepburn, using her occasional slight imperiousness to great effect, Karen’s lack of compromise, her domineering personality and her own moral superiority help to make her both an unsympathetic victim to many, and a person who manages to drive wedges (inadvertently) between herself and her two closest friends, Joe and Martha.

That wedge spins out from the fact that the more sensitive Martha (a sensitively delicate performance from Shirley Maclaine) does have romantic and sexual feelings for Karen, feelings that she has carefully suppressed (or perhaps not even understood) and confesses to late on in a wave of guilt and shame, mixed with an almost unspoken hope that Karen might respond to this confession with more than silence and a quiet assurance that it won’t change anything. Neither of which is what Martha wants (or needs) to hear.

MacLaine was critical of Wyler for removing from the film scenes that showed Martha’s love and affection for Karen in a romantic light. Perhaps Wyler was still slightly squeamish about the likelihood of America accepting a lesbian character presented honestly and sensitively. –But MacLaine has a point for, while the film does suggest it is reprehensible to  make judgements about other people’s private lives, it falls well short of suggesting that a lesbian relationship is as normal and valid as a straight one, or that Martha’s feelings for Karen are the equal of Karen’s for Joe. Karen will let the idea slide, but she is hardly thrilled by it, meanwhile Martha is made the more passive and hysterical of the two women, and her feelings for Karen are a source of tragedy in the story. While it’s of its time, the film still shies away from the idea that a lesbian relationship could ever be without a tinge of scandal. Unlike, say, Dirk Bogarde’s gay barrister in Victim, there is always something “not quite right even if we shouldn’t judge” about homosexuality in the film.

It’s why the film is at its strongest when showcasing its outrage for the many selfish and self-appointed moral guardians who ruin lives with sanctimonious self-regard. Miriam Hopkins is eminently smackable as Martha’s appalling aunt, whose love of gossip pours fuel on the fire. Fay Bainter is very good (and Oscar nominated) as Amelia, whose reluctance and unease about her self-appointed role as the moral police, only partly tempers her rigidity and inflexibility. Words of support and encouragement from others are noticeable by their absence, and even the long-standing loyalty of Joe (a rather charming James Garner) is eventually tinged (forever for Karen) by a moment of doubt.

Rumours and innuendo are dangerous and cause real and lasting damage to people’s lives. It’s a fact the film enforces strongly – and it’s an idea that perhaps is even more relevant today at a time when social media sends moral judgements that ruin lives around the world even faster than Amelia Tilford’s phone can. A well-made film with moral force, that could have gone further, but still went further than many others dared at the time.
Email ThisBlogThis!Share to TwitterShare to FacebookShare to Pinterest
Labels: Audrey Hepburn, Fay Bainter, James Garner, Miriam Hopkins, School drama, Shirley MacLaine, Social issues, Veronica Cartwright, William Wyler