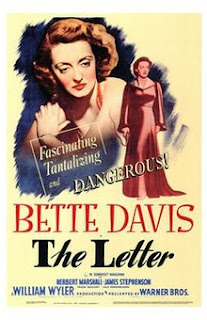 The “woman’s picture” was a popular genre of the 1940s, a catch-all for stories that centred around women dealing with domestic issues in the home or in relationships, with the lady herself the driving force of the narrative. There were several stars who excelled in this wide-ranging genre, but the best was perhaps Bette Davis. This melodrama is a superb example of exactly this sort of female-led narrative, focusing in on its heroine making catastrophic decisions that lead to terrible consequences.

On a plantation in Malaya, in the late 1930s, Leslie Crosbie (Bette Davis) the wife of gentle plantation owner Robert (Herbert Marshall) guns down a man, Geoff Hammond, who comes to visit her in her home alone. She insists to her husband, and their lawyer Howard Joyce (James Stephenson), that she was defending her honour. The trial for murder feels like a formality – until Joyce’s clerk Ong Chi Seng (Sen Yung) informs him that Hammond had a Eurasian wife (Gale Sondergaard) who has a letter from Leslie to the dead man which casts a very different light on the affair. Because “affair” is the right word: the letter implies Leslie invited the man to visit her while her husband was out. Mrs Hammond will hand the letters over to the authority – unless Leslie and Joyce cough up a huge sum of money to stop her.

The Letter is a film with two marvellous book-end scenes. The first is a beautifully shot and assembled murder sequence, where Wyler’s camera moodily pans through the sleeping native workers on the plantation – dappled by moonlight – until it finds itself drawn towards the steps of the plantation house by the sounds of gunfire. It’s a superbly marshalled sequence that mixes stillness and quiet from the start with a sudden explosion of noise, reflected in the shift in editing from slow camera movements to fast cuts. Nothing else in the film quite matches it until we reach the final sequence that mirrors it with Bette Davis heading back outside into the moonlight, where a terrible and violent surprise awaits her.

And you can enjoy that because no-one did these brutal, arrogant, high-society queens as well as Bette Davis. Davis is superb here, bringing just the right touch of melodrama to balance the intensity of Leslie’s selfish desperation to get away with what we immediately know is an act of murder. Leslie Crosbie is entitled, arch and a natural liar who carefully builds a series of alternative stories (each of them less believable than the one before) which she spins carefully with a mix of vulnerability and a dash of feminine weakness, to try and get away with murder. It’s a domineeringly strong performance that powers the entire film and Wyler draws a wonderful arch cruelty from her, just below the surface of her acceptable female hobbies of knitting and dinner planning.

Wyler balances this with the two men around her, both of whom are under her spell to different degrees. Herbert Marshall is very good as her husband, a generous, loving, naïve soul who believes his wife without question until he later realises he shouldn’t. Marshall does an excellent job with making this hen-pecked weakling intriguing, not least in his later passive-aggressive response when discovering most of his fortune has been blown to save his wife from a certain death sentence.

The chicanery of Davis’ character in the film is of course helped by her being white and rich, and prejudices against Hammond (not to mention the reception his Eurasian wife expects to gets if she comes forward) are most of the mainstay of the case in her defence. Joyce basically speaks platitudes about professional integrity, while all but knowingly defending a murderer (he in fact goes out of his way to give himself plausible denial and avoids questions). The film manages to present the native workers on the plantation – and Joyce’s clerk – as something a bit more than this, as perhaps the only people in the film with actual integrity.

But of course Davis gets away with it, because she can pay to do so, but the film finds other ways to punish her (as these women’s pictures usually do for adultery). The film’s final sequences see Davis’ character slowly collapse from arrogant certainty into moral and mental torture, before almost willingly marching towards certain danger. Wyler’s film is a great vehicle for her, but it’s also superbly made and shot and captures the sweaty lack of justice in the British Empire with perfection.
Email ThisBlogThis!Share to TwitterShare to FacebookShare to Pinterest
Labels: Bette Davis, Courtroom drama, Gale Sondergaard, Herbert Marshall, James Stephenson, Murder mystery, William Wyler