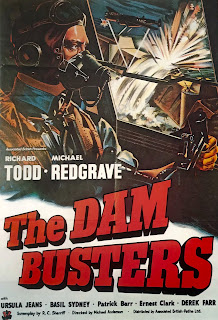 It’s famous for its stirring theme. Those bouncing bombs. The fact that George Lucas, while still completing the special effects, spliced in the final bombing runs into his first cut of Star Wars. But where does The Dam Busters sit today as a film?

In 1942, aeronautical engineer Barnes Wallis (Michael Redgrave) is working on a plan to take out the German dams on the Ruhr, a strike that could cripple German heavy industry. Conventional bombs can never cause enough damage, and the dams are protected from torpedo attack. So Wallis has a crazy idea – to build a bouncing bomb that will skim the top of the water, hitting the dam, with its top spin taking it down to the base of the dam for detonation. It’s a crazy idea – but it finally wins favour, with Wing Commander Guy Gibson (played by real-life World War II paratroop veteran Richard Todd) given command over an operation that promises to be risky and dangerous beyond belief.

The Dam Busters doesn’t really have much in the way of plot, being instead a rather straight-forward, even dry in places, run through of the mechanics involved in planning the operation and overcoming the engineering difficulties that stood in the way of the operation. Throw into that our heroes overcoming the various barriers and administrative hiccups put in the way by the authorities and you have a pretty standard story of British pluck and ingenuity coming up with a left-field solution that saves the day. (Though Barnes Wallis denied he faced any bureaucratic opposition like the type his fictional counterpart struggled with for most of the first forty minutes).

Of course, the film is also yet another advert for the “special nature” of the British under fire, a national sense of inherent destiny and ingenuity that has frequently done as much harm as good. Made in co-operation with the RAF, it’s also a striking tribute to the stiff-upper-lipped bravery of the RAF during the war, and the sense of sacrifice involved in flying these deadly missions.

In fact it’s striking that the film’s final few notes are not of triumph after the completion of the operation, and the destruction of the two dams, but instead the grim burden of surviving. After 56 men have been killed on the mission, Barnes Wallis regrets even coming up with the idea. The final action we see Gibson performing is walking quietly back to his office to write letters to the families. Anderson’s camera pans over the empty breakfast table, set for pilots who have not returned, and then over the abandoned belongings of the dead still left exactly where they last placed them. It’s sombre, sad and reflective – and probably the most adult moment of the film. 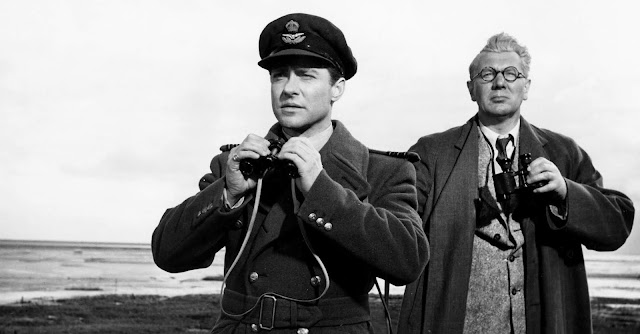 Because other than that, it’s a jolly charge around solving problems with a combination of Blue Peter invention, mixed with a sort of Top Gear can-do spirit. Michael Redgrave is very good as the calm, professorial, dedicated Barnes Wallis, constantly returning to the drawing board with a reserved, eccentric resignation to fix yet another prototype. The sequences showing the engineering problems being met and overcome are interesting and told with a quirky charm that makes them perhaps one of the best examples of such things made in film.

The material covering the building of the flight team is far duller by comparison, despite a vast array of soon-to-be-more-famous actors (George Baker, Nigel Stock, Robert Shaw etc.) doing their very best “the few” performances. Basically, generally watching a series of pilots working out the altitude they need to fly at in training situations is just not as interesting as watching the boffins figure out how to make the impossible possible.

The flight parts of the film really come into their own in the final act that covers the operation itself. An impressive display of special effects at the time (even if they look a bit dated now), the attack is dramatic, stirring and also costly (the film allows beats of tragedy as assorted crews are killed over the course of the mission). The attack is brilliantly constructed and shot by Michael Anderson, and very accurate to the process of the actual operation, in a way that fits in with the air of tribute that hangs around the whole film.

All this reverence to those carrying means that we overlook completely the lasting impact of the mission. “Bomber” Harris (here played with a solid gruffness by Basil Sydney) later considered the entire operation a waste of time, money and resources. Barnes Wallis begged for a follow-up to hammer home the advantage, but it never happened. The Germans soon restored their economic capability in the Ruhr. Similarly, today it’s more acknowledged the attack killed over 600 civilians and over 1000 Russian POWs working as slave labour in the Ruhr. Such things are of course ignored – the film even throws in a moment of watching German workers flee to safety from a flooding factory floor, to avoid showing any deaths on the ground.

And of course, the film is also (unluckily) infamous for the name of Gibson’s dog. I won’t mention the name, but when I say the dog is black and ask you to think of the worst possible word to use as its name and you’ve got it. It does mean the word gets bandied about a fair bit, not least when it is used as a codeword for a successful strike against the dam. Try and tune it out.

The Dam Busters is a solid and impressive piece of film-making, even if it is low on plot and more high on documentary ticking-off of facts. But it’s also reverential, a little dry and dated and avoids looking at anything involved in the mission with anything approaching a critical eye. With its unquestioning praise for “the British way”, it’s also a film that reassures those watching it that there is no need for real analysis and insight into the state of our nation, but instead that we should buckle down and trust in the divine guiding hand that always pulls Britain’s irons out of the fire.
Email ThisBlogThis!Share to TwitterShare to FacebookShare to Pinterest
Labels: Basil Sydney, British Films, Michael Anderson, Michael Redgrave, Patrick Barr, Richard Todd, Ursula Jeans, War film, World War Two