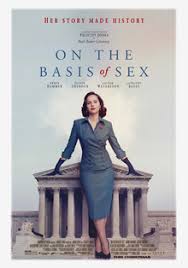 Ruth Bader Ginsburg is an extraordinary person, her pioneering work to bring about sexual equality in the USA something that has made an actual, permanent change to her country for the better. This biopic covers the early years of this campaign in the 1970s, and if it at times gets a little too bogged down in the conventions of these sort of biopics, it does tackle them with genuine passion.

At Harvard in the mid-1950s, Ruth Bader Ginsburg (Felicity Jones) is one of the first women allowed in to study law – and finds that she faces a battle to constantly prove that she deserves to be there. Her husband Martin Ginsburg (Armie Hammer), himself an accomplished lawyer, is endlessly supportive and encouraging, but Ruth continues to find that she struggles to be treated as an equal in the male dominated legal world of the 1950s and 60s. All this changes when her husband brings to her attention a tax case that discriminates against a male carer – and she realises this could be a vehicle to establish a precedent that American laws are unconstitutional when they discriminate on the basis of sex.

Mimi Leder directs a film full of warmth, respect and feeling for the importance of the story it is trying to tell. While it at times seems a tiny bit overwhelmed by the responsibility of bringing such a pioneering person’s story to the screen, it still manages to bring enough character and flair to it to make it an engaging watch. Perhaps you might feel at times you are only beginning to scratch the surface of RBG’s extraordinary life – but the film still treats you with the respect to assume that you can follow the legal arguments being outlined, even as it structures much of the film with clichés.

It does have some fine sequences in it though, not least a running visual image of Ruth walking up steps towards important buildings. The opening sees her lost in a crush of young male Harvard students, struggling to find her own space in a male dominated world. Later she climbs the steps outside the Court of Appeals, this time at the head of a progress of men following her behind. And finally the film bookends its opening Harvard steps sequence with Ruth – this time alone – climbing the steps of the supreme court: shots and cuts echo the opening of the film as Felicity Jones is slowly replaced by the real Ruth Bader Ginsburg.

Felicity Jones does a decent job as Ginsburg, although she struggles with a slightly awkward make-up job to age her up. She however captures the fire in Ginsburg’s belly and her passion to right wrongs, as well as the demanding intellectual ability that at times made her a domineering and difficult person. She doesn’t always find much wit in the role, but she really wins the empathy of the audience with the injustice she faces – not least from the very start having to justify why she has taken a place at Harvard from a man in the first place.

It helps as well that she has such a fine scene partner for so much of the film in Armie Hammer, who is excellent as her supportive, way-ahead-of-his-time husband Martin. Taking on most of the domestic chores – and combined with his own brilliant career – Martin was as much a fascinating figure as Ruth. Hammer plays with a joyful, charismatic relish, perfectly mixing intellectual curiosity with an innate decency. It’s also a generous performance that complements Jones perfectly.

The relationship between these two is the emotional heart of the film, frequently raising warm smiles from the audience. An early scene where Martin is diagnosed with cancer after collapsing during a game of charades tugs at the heartstrings, not least for the sudden pained look of panic that crosses Martin’s face as he collapses, and Ruth’s protective rush to his side. These two argue once in the film – and that an argument based around Martin encouraging Ruth to live the life she wants – and the film goes out of its way to show that their life together was an equal partnership, where both were determined to support and protect the other.

It’s a lovely relationship to place at the film’s centre – even if Hammer is essentially playing the supportive wife role that so many biopics of men have featured (Felicity Jones in The Theory of Everything for starters springs to mind!). That points at one of the weaknesses of the film: its predictability. Structurally it follows the route of many of these sort of biopics, with initial struggle, a cause, set-backs, pep-talks, sudden nerves before the eventual demonstration of triumph. Frankly nothing in the film narratively is remotely surprising, and Leder, despite a few touches of flair, largely directs with a workmanlike assurance.

Workmanlike is a little harsh, but is probably the film’s main weakness. While it’s well-played and has an excellent story – and, I will say it again, a script that largely expects its viewers to follow the legal points – it also can’t quite figure out a way to tell the story that doesn’t squeeze it into the biopic clichés that you’ve seen dozens of times before. Is that necessarily a bad thing? Not exactly: but it also makes the film at heart an engaging middle-brow drama, which seems a shame when Ruth Bader Ginsburg is anything but.
Email ThisBlogThis!Share to TwitterShare to FacebookShare to Pinterest
Labels: Armie Hammer, Felicity Jones, Jack Reynor, Justin Theroux, Kathy Bates, Mimi Leder, Sam Waterston, Stephen Root