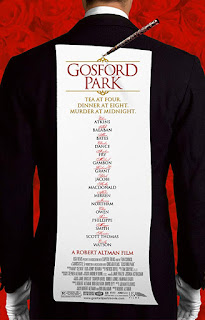 We’ve always fancied ourselves that when Brits make films in America – think John Schlesinger’s brilliant analysis of New York hustlers in Midnight Cowboy – they turn the sharp analytical eye of the outsider on American society. But do we like it when America turns the same critical eye on us? Gosford Park is a film surely no Brit could have made, so acutely vicious and condemning of the class system of this country, without the hectoring that left-wing British filmmakers so often bring to the same material, it’s just about perfect in exposing the hypocrisy and cruelty that undermines our class system. You’ll never look at an episode of Downton Abbey the same way again.

In November 1932, Sir William McCordle (Michael Gambon) hosts a shooting party at his country house. McCordle is almost universally despised by his relatives and peers – most especially his wife Lady Sylvia (Kristin Scott-Thomas) – but tolerated as his vast fortune from his factories basically funds the lives of nearly everyone at the house party. While the upper classes gather upstairs, downstairs the servants of the house led by butler Jennings (Alan Bates) and housekeeper Mrs Wilson (Helen Mirren) order the house to meet the often selfish and thoughtless demands of the rich. The house is rocked midway through the weekend, when a murder occurs overnight. With motives aplenty, perhaps the new maid Mary (Kelly Macdonald) of the imperious Countess Trentham (Maggie Smith) has the best chance of finding the truth.

First and foremost, it’s probably a good idea to say that this is in no way a murder-mystery. Robert Altman, I think, could barely care less about whodunit. While the film has elements that gently spoof elements of its Agatha Christie-ish settings, Altman’s interest has always been the personal relationships between people and the societies they move in. So this is a film really about the atmosphere of the house and most importantly how these people treat each other. Altman despised snobbery, and in a world that is fuelled by that very vice, he goes to town in showing just how awful and stifling so many elements of the class system really were. 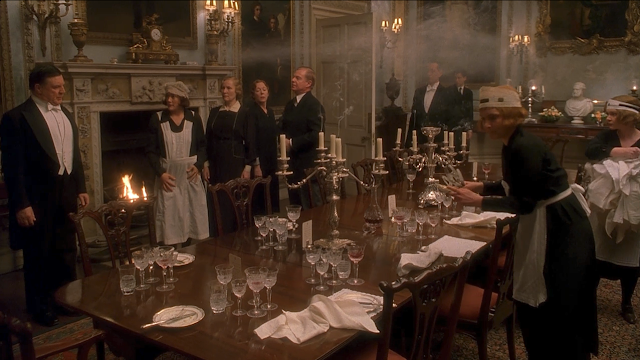 “He thinks he’s God Almighty. They all do.” So speaks Clive Owen’s Robert Parks, valet, of his employer the patrician Lord Stockbridge (Charles Dance, excellent). You’ve got the attitude right there: the rich see themselves as a different species to those pushing plates around and cleaning clothes below stairs. The idea of there being anything in common is laughable. Slight moments of casual conversation between servant and master in the film are governed by strict laws and carry a quiet tension.

It’s so acute in its analysis of the selfishness, snobbery, cruelty and arrogance of the British class system that each time I watch it I’m less and less convinced that Downton Abbey (the cuddliest version of this world you could imagine) creator Julian Fellowes had much to do with it. This film is so far from the “we are all in this together” Edwardian paternalism of that series, you can’t believe the same man wrote both. All the heritage charm of Downton is drained from Gosford, leaving only the cold reality of what a world is like where a small number of people employ the rest.

Upstairs the hierarchy is absurdly multi-layered. Everyone is aware of their position, with those at the top of the tree barely able to look those at the bottom in the eye, let alone talk to them. The rudeness is striking. Maggie Smith (who is brilliant, her character totally devoid of the essential kindness of her role in Downton Abbey has) is so imperiously offensive, such an arch-snob, she can only put the thinnest veil over her contempt when she deigns to speak to her inferiors. Her niece, played with an ice-cold distance by Kristin Scott-Thomas, embodies aloofness, selfishness and casual cruelty.

Ivor Novello (Jeremy Northam, superb) – the one real person in the film, and a film star – is treated like a jumped up minstrel player, with characters falling over themselves to make snide comments about his career. His guest Morris Weissman (an excellent Bob Balaban), a Hollywood film producer, is treated with similar contempt – when reluctant to divulge details of the film he is in England researching (a Charlie Chan film) for fears he will spoil his plot, the Countess bluntly informs him “oh, none of us will see it”. Later, as Novello plays the piano (essentially singing for his supper) only the servants are pleased – most of the upper classes endure it under sufferance (“Don’t encourage him” the Countess says when there is a smattering of applause). You can see why, after only a few hours in the house, Weissman whispers to Novello: “How do you put up with these people?”

The servants themselves are bits of furniture, or barely acknowledged at all. Altman doesn’t shoot a single scene without a servant present, but this often hammers home their irrelevance to the upper classes (it’s made even more effective by seeing actors like Bates, Jacobi, Grant, Macdonald, Owen and Watson essentially being treated as extras). There are no bonds between upstairs and downstairs at all. Any upset witnessed on either side is responded to with silence. When Emily Watson’s Elsie (a brilliant performance of arch awareness of her place) momentarily forgets herself and speaks out at the dinner table, it’s treated like she has crapped on the floor – needless to say her career is finished. 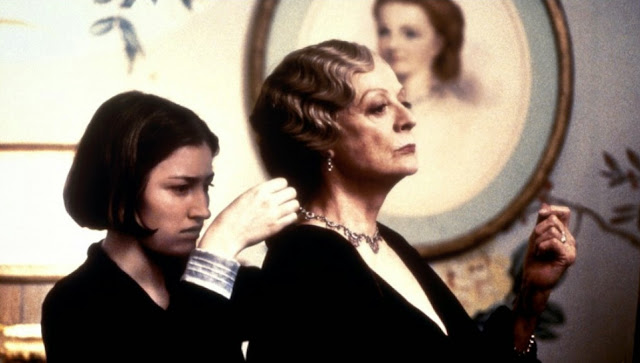 The servants however echo the pointless rituals and ingrained hierarchy of their masters below stairs. For ease (!) the house servants insist the visiting servants are only addressed by the names of their employers not their own names. At their dinner table, their seating reflects the hierarchy of their employers. Many of the servants are more grounded and “normal” than the upstairs types, but they are as complicit in this system continuing as anyone else. They simply can’t imagine a life without it, and accept without question their place at the bottom rung of the house.

Ryan Phillippe, later revealed as an actor masquerading as a servant (for research), immediately shows how hard it is to move between the two social circles. The servants despise him as a traitor who may leak secrets about their views of the employers. The guests see him as a jumped up intruder, even more vulgar than Novello and Weissman. His later humiliation is one of the few moments that see both sides of the social divide united (it’s fitting that it is an act of cruelty that reinforces the social rules that brings people together).

The focus is so overwhelmingly on the class system – with Altman’s brilliant camera work (the camera is never still) giving us the sense of being a fly-on-the-wall in this house – that you forget it’s a murder mystery. Here the film is also really clever, archly exposing the harsh realities of the attitudes held by your standard group of Christie characters. Dance’s Lord Stockbridge in a Christie story would be a “perfect brick” but here we’ve seen he’s a shrewd but judgemental old bastard. The film throws in a clumsy Christie-style incompetent police detective, played by Stephen Fry. This is possibly the film’s only real misstep as Fry’s performance touches on a farcical tone that seems completely out of step with the rest of the film. But the Christie parody is generally wonderful, exploding the cosy English world the public perception believes is behind Christie (even if the author herself was often darker than people remember!).

It’s a hilarious film – Maggie Smith in particular is memorable, from cutting down her fellow guests, to judgementally tutting at shop-bought (not homemade) marmalade – but it’s also a film that creeps up on you with real emotional impact. Kelly Macdonald is very good as the most “everyday” character, who takes on the role of detective and has superb chemistry with Clive Owen’s dashing valet. But the film builds towards a heart-rending conclusion – a conclusion that, with its reveal about the darker side of Gambon’s blustering Sir William, feels more relevant every day – that shows the secret tragedies and dark underbelly of these worlds, with a particularly affecting scene between Atkins and Mirren (Mirren in particular is such a peripheral figure for so much of the film, that her final act revelations and emotional response carries even more force).  It’s heart rending.

Gosford Park is a film continually misremembered as either a cosy costume drama or a murder mystery. It’s neither. It’s a brilliant analysis of the British class system and a superb indictment of the impact and damage it has had on people and the country. Hilarious, brilliantly directed by Altman with a superb cast – it’s a masterpiece, perhaps one of the finest films in Altman’s catalogue.
Email ThisBlogThis!Share to TwitterShare to FacebookShare to Pinterest
Labels: Alan Bates, Bob Balaban, Charles Dance, Clive Owen, Emily Watson, Helen Mirren, Jeremy Northam, Kelly Macdonald, Kristin Scott Thomas, Maggie Smith, Michael Gambon, Robert Altman, Ryan Phillippe, Stephen Fry